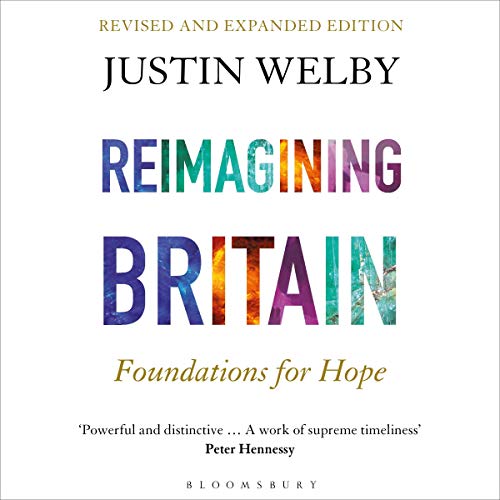 Written by: Justin Welby
Narrated by: Jonathan Oliver
Try for $0.00

It is now three years since Justin Welby first published his Reimagining Britain. The fundamental message of that book remains as urgent as ever. But in this revised and expanded edition, Welby has taken fully into account the impact of the COVID-19 pandemic, Brexit and all the social and political unrest that has ensued. If anything, the new edition of Archbishop Welby's book is even more important than its predecessor. Here is a radical vision for 21st-century Britain.

The thesis of this book is that the work of reimagining is as great as it was in 1945, and will happen either by accident - and thus badly - or deliberately. Welby explores the areas in which values are translated into action, including the traditional three of recent history: health (especially public and mental), housing and education. To these he adds family; the environment; economics and finance; peacebuilding and overseas development; immigration; and integration. He looks particularly at the role of faith groups in enabling, and contributing to, a fairer future.

When so many are immobilized by political turmoil, this book builds on our past to offer hope for the future, and practical ways of achieving a more equitable society.

"Timely, wise, humane, positive - just what is needed to focus the national debate on shared values and creating a better future, particularly for the half of the country left behind by ‘modernisation’ and ‘globalisation'." (Lord Andrew Adonis)

"Justin Welby’s voice is powerful and distinctive. He writes with verve and insight. Reimagining Britain is a work of supreme timeliness." (Lord Peter Hennessy of Nympsfield)

"A brave, passionate and provocative case for community, courage and stability, not simply as concepts for debate but as foundations for practical change - for ourselves, for each other and for those we will never meet." (Loretta Minghella, OBE)

What listeners say about Reimagining Britain