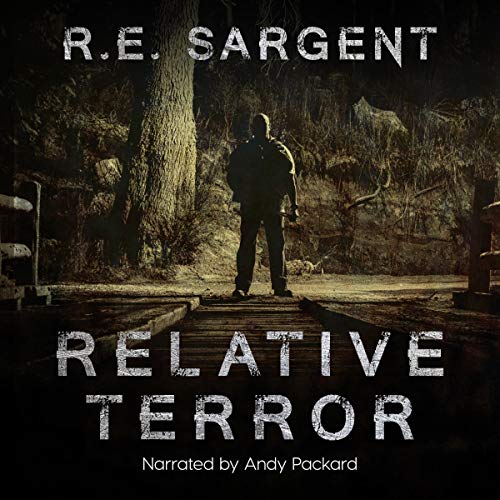 Written by: R.E. Sargent
Narrated by: Andy Packard
Try for $0.00

What if everything you believed was wrong?

Dominick Maxwell had an average life...with one exception. Everyone he was close to ended up dead.

When Dom's sister - his last living relative - is attacked and dying, Dom thinks he has lost it all, until he realizes that he is the prime suspect.

Fearing he is next - and possibly about to end up in jail - Dom disappears and urgently tries to find out the answer to the question that has been haunting him for years.

Who or what is responsible for destroying his life by taking away all that matters to him?

What listeners say about Relative Terror

R.E. Sargent has done a phenomenal job writing a story steeped with rich characters and a plot filled with twists and turns that will leave you gnashing at the bit for more of his work. Andy Packard’s narration effortlessly guides the listener through Sargent’s creation transitioning to and from a myriad of voices and accents with precision. I highly recommend this book!

Con: There is a female character in this book that acts outrageously unbelievably in a "love" capacity and it's hard to take seriously.

Pro: The ending is rather fantastic and was not one that I guessed, which is both rare and refreshing!

Overall, I'd say that the ending makes up for how silly some of the behavior is.

Can reviews be bought?

I can't believe Audible would offer so inferior an effort. Hackneyed story, inferior plotting, disappointing narrator - but what did the narrator even have to work with? I should be paid to have spent my time trying to uncover any entertainment value here. I wonder, however, who in the world are the people who left positive reviews for this crapola? Audible offers some GREAT products but THIS one should be PANNED. The grammar, dialogue and story effort are painfully bad. There is no excitement, mystery or surprise. What a waste of space and money!

Just when you think that you’ve figured it out...

This author has fast become one of my fave thriller writers! His books keep you captivated and just when you think that you’ve figured it out...BAM! Totally blindsided! This book is no exception...Dom has lost just about every living relative, except his older sister, Nina. When Dom gets the late night call that Nina had been viciously attacked at home, he knows that someone is out to get him. He no longer believes that everyone that he’s ever loved, has died by accident. Dom decides to run, until he’s figured out what/who is after him. Of course, that makes him the #1 suspect in his sister’s case. Dom meets Jennifer while on the run, and she becomes his confidant and partner. Action, adventure and a psychotic killer all make for a spell binding story.
I accepted a complimentary copy of this book in exchange for an honest review.

Oh this book made me laugh!I know it was meant to be serious,but it was so campy i couldn't stand it.A man has everyone he loves around him die.When his sister is attacked,instead of going to the police,he takes money from the bank,buys another car(lucky they're in Arizona!) and runs.He picks up a chick on the way.She is smitten and pledges her love in 2 minutes.The cops catch up.Andy Packard was a decent enough narrator.I was given this free review copy audiobook at my request and have voluntarily left this review.

Wow....I loved this story! i could not put down the book! i had no clue how the story would end and was not disappointed! i loved the story and the narration really brought it to life! i highly recommend this book to any suspense/thriller lover!

When you think you figured it out guess again

Really thought I figured it out than at the 30 minutes left mark. Boom bomb shell unleashed worth the read. Have not read a book from this wonderful author I have not liked yet. Keep them coming

Relative Terror was a good read by R.E. Sargent. Unfortunately for Dominick, everyone close to him has ended up dead. His last living relative, his sister, is attacked and dying. He becomes the prime suspect although hhe fears that he's next. Dom disappears in order to find the answers he needs. He is looking for who has destroyed his family and his life. I can't wait to read more by R.E. Sargent.

This story takes you on a crazy ride. It is full of ups an downs. The author did a good job with misdirection. It made it more difficult to figure things out. Also the whole Detective angle I thought was useless...actually came in pretty handy. I listened to this on audio. Andy Packard did a great job. His little additives really helped lift this story up to another level.

I enjoyed this story! can't wait to listen to more of this Author! So for he has not disappointed!!