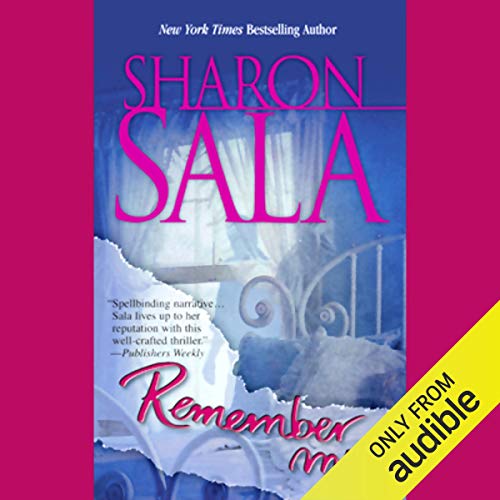 Written by: Sharon Sala
Narrated by: Colleen Delany
Try for $0.00

Clay LeGrand's heart shattered the day his wife, Frankie, disappeared. Had she run away? Been kidnapped? Or had she simply left him for another man? Two years later he's still asking the same burning questions when he comes home to find Frankie in his bed, as if nothing had ever happened.

The shock, outrage, and anger in Clay's eyes say it all: he doesn't believe that she can't remember anything about the past two years. He's seen the strange tattoo on her neck, the needle marks on her arm. What's left of their marriage has become an endless loop of unanswered questions and black holes of memory. But the answers are there, waiting in the shadows, as evil as the interloper who has marked Frankie as his own. This time he plans to take Frankie away forever. But to get her, he's going to have to get past life's most indomitable force, Clay LeGrand's love for his wife.

©1999 Sharon Sala (P)1999 Audible, Inc.
All rights reserved including the right of reproduction in whole or in part in any form. This edition is published by arrangement with Harlequin Books S.A. All characters in this book are fictitious. Any resemblance to actual persons, living or dead, is purely coincidental.
Suspense Romantic Suspense Contemporary
Show more Show less

What listeners say about Remember Me

A gripping story of loss and finding again!

This is a short story about a man who losses his wife only to find her again. It's also about a heroine who looses so much only to get even more back.
It's amazing how, in such a short story, we can enjoy a spine tingling, on the edge of your seat story. The narration helped with the suspension and made it even more compelling. She made the voices to be just enough different that you could tell the different characters but not so bad that it was cheesy!! It was such an interesting twist to a romance story. Sala never fails to entertain! Enjoyed it immensely!

Not too crazy about the narration.

I loved the actual story. It was the narrator's interpretations that bothered me a little.

Love the story - not the storyteller

Would you try another book from Sharon Sala and/or Colleen Delany?

Yes for Sharon Sala, no for Colleen Delany

Sharon Sala is a favorite of mine and I will gladly explore more of her books. I just don't think I can do it with Ms. Delany.

Why cut out souch of the story!

I love this story but if I had known it was abridged I never would have purchased it. Great way to ruin a great story

This is a short story that's not very good. Over dramatic in both writing and performance.

Keeps you on your toes

What made the experience of listening to Remember Me the most enjoyable?
The characters were great and very well defined The story wasn't like some where you know what's going to happen from the get go The reader made the characters come alive