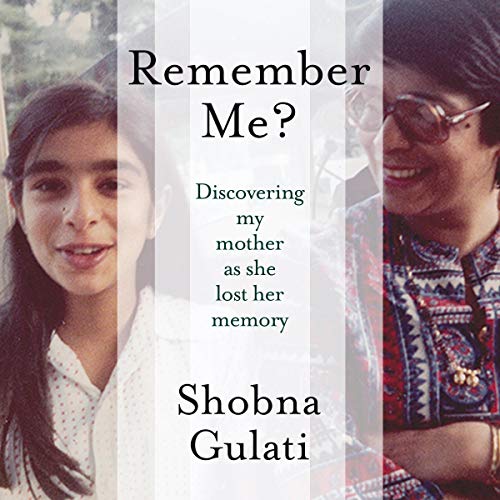 Discovering My Mother as She Lost Her Memory
Written by: Shobna Gulati
Narrated by: Shobna Gulati
Length: 9 hrs and 24 mins
Categories: Health & Wellness, Physical Illness & Disease
5.0 out of 5 stars 5.0 (1 rating)

Remember Me? is a memoir of losing a parent to dementia capturing memory at its most intimate, fragile and fallible. It also examines the role shame plays in trauma, why it forces us to bury our problematic pasts and be selective of what we remember.

In December 2019, soon after her mother's untimely death, Shobna Gulati discovered bags and bags stuffed with press clippings, spanning Shobna's life from childhood right up to the year before her mother died in her family home. As Shobna sat in the midst of a sea of clippings she began to think over her mother's life and the stories that had only begun to surface from her past as she lost her to dementia.

Remember Me? captures the powerful emotions that these memories hold to both Shobna and her mother; secrets they had collectively buried and also the concealment of her mother's condition.

In this deeply moving yet humorous memoir, a daughter sets out to reclaim her mother's past after her death and in turn discovers a huge amount about herself and their relationship. What ensues is a story of cultural assimilation, identity and familial shame.

For anyone who loved Laura Cumming's On Chapel Sands and Wendy Mitchell's Somebody I Used to Know.

What listeners say about Remember Me?

This book is not just about a woman loosing her mom to Alzheimer’s. It has opened my eyes more to systemic racism. Embedded far more than I ever realized. My eyes have been opened so much lately. Realizing things that have been ingrained my whole life. Your book is making me think more and honestly being ashamed of what I thought was racism and what the reality is. I purchased this to support a wonderful actor but in the end learning valuable lessons for myself and to pass on to my children should this happen to me. It has moved me to tears at times. Well done.