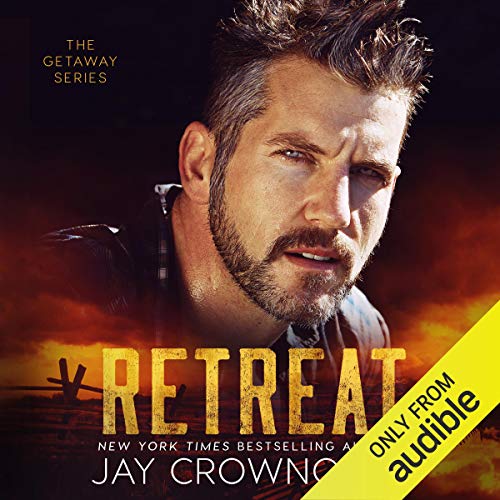 Written by: Jay Crownover
Narrated by: Natasha Soudek
Try for $0.00

Every once in a while, you need to get away from it all.

I was a woman on the edge, shaken and shattered after a breakup that felt like it tore my entire world apart. My best friend, sick of watching me drown in misery and melancholy, harassed me until I agreed to go with her on a weeklong wilderness retreat.

She promised days spent bonding and getting in touch with our inner badasses. It was supposed to be all about the two of us roughing it and making do with the bare minimum. She assured me we were going to be pushed to our limits in ways that were unimaginable. Neither one of us could have ever guessed just how right she was.

Nowhere in the glossy brochure did it say anything about the fact I was going to have to battle the insufferable but deliciously rugged and sexy trail guide instead of the elements. The brochure also forgot to mention the part that warned when you left civilization behind, there was no place to pack your inhibitions and fears.

I was told that I would be facing a week where the only thing I should expect was the unexpected. However, no one mentioned that I was going to have to fight for my life - and my heart - as soon as I ventured into the unknown. I was a pro at hiding from my feelings, but when it came time to face a real threat, one that could change everything, I learned I was more of a no surrender, no retreat kind of girl.

Retreat is a stand-alone novel, the first in the Getaway series, which centers on the hardheaded and brokenhearted Warner brothers and the women who dare to love them.

These boys are very good at putting the wild in wilderness.

What listeners say about Retreat

Another hit series for Jay!

Jay Crownover makes a departure from her tatooed bad (good) boys and enters the world of ranchers/ cowboys. I was so looking forward to this book and I was not disappointed at all! I would given the story 10 stars if I could. I can't wait for the next book! I would have given 5 stars for Overall but the narration...

The only negative comment I have is with the narrator (as others have written). However, I'm not sure if it's the narrator or the director/ editor/ producer (who is responsible for the speed of narration?). When I started the book I wasn't sure how I was going to continue but then I changed the listening speed to from 1x to 1.25x on my device. I found the problem! This is the perfect speed. I had no trouble listening after that. In fact I couldn't stop!

Worth a credit? YES! But change the speed on your device.

Loved the story more than narration

Jay is a new to me author and I read the story before I listened to it. I love the story, so much happens to the heroine! I really liked her growth throughout. With the narration, I couldn't finish. I enjoyed the female parts but not the male. I am not sure if most had to do with the Wyoming accent (which I am from there and this is not a Wyoming accent) or just male in general but I just couldn't do it.

Fingernails on a blackboard.

I usually enjoy Crownover's work but I'll be reading this one instead of listening. Couldn't even get out of the airport.

I read the other reviews and decided to chance take a chance. I should have just read it. The marked men series had such awesome performers I thought how bad can it be with a decent story? The verdict is bad. I basically ran the story at 1.5 speed to get through it. Ms soudek was the wrong choice in every way. Her voice sounded old sratchy and definitely not right. There are a few performers that are an automatic no for me and this would be one unless it was about an old woman. I just couldn't get past her performance to like the characters. I definitely didn't get invested as I normally do from books by this author. I wonder if the authors get to choose who reads their stories. If so jay must have had stopped up ears the day she listened to this one.

The story line has potential. I hope the next story has a better outcome

I can't stand the narrator

I always read a couple reviews before purchasing a book but when it comes to jay crownover there is no need to read reviews because she writes some good shit. I regret not reading this review because the narrator ruin it.

I read the reviews

I read the reviews and bought the book anyways. The first chapter was hard to get through just because the narrator over acted every word. As the story developed and more characters were introduced it got a lot better.

Come on (rolling my eyes), why do you all continue to do this to us? We all know Jay Crownover is an excellent author, but why do you continue to ruin the books with your poor choice in performers. I couldn't even finish it, sounds like she was straining just to speak and the slow monotone made it worst; my throat was hurting for her (similar to seeing or hearing someone throw up and it causes you to do the same). Sorry, I call for a re-read in order to adequately provide a helpful review.

Overall I really liked this book. Loved the action, the struggles they went through and that the men weren't unrealistically able to save the women.

I do think there is too much "describing" and too many analogies for each feeling and thought. Great visualization was a result but then it became too much.

I however, am hooked and am already reading the 2nd book.

The narrator did great, my only suggestion would be for her to try to make the man's voice different. It wasn't bad, just kind of grating. But I am only one person.

Retreat was a little too cliche for my tastes, but more than that the narrator killed it for me.

The narrator made me feel as if I was listening to Mary Poppins rather than a romance novel.

Performance Not So Good - Story GREAT!

Would you consider the audio edition of Retreat to be better than the print version?

I would definitely not suggest that anyone purchase the audible file to go along with the digital or print version, even if it is only $1.99 if you buy the digital file. The narrator's voice killed the characters for me. I found the reader's sound to be very one dimensional and without very much emotion. The male voice sounded painful and not manly... I don't know any men who speak like that unless they are recovering from a rough bout of laryngitis.

I enjoyed all of the characters for may reasons. They were quirky and funny and easy to fall in love with.

Different reader would make all the difference. Sebastian York or Andy Arndt or Kate Reading would be great for this sort of book.