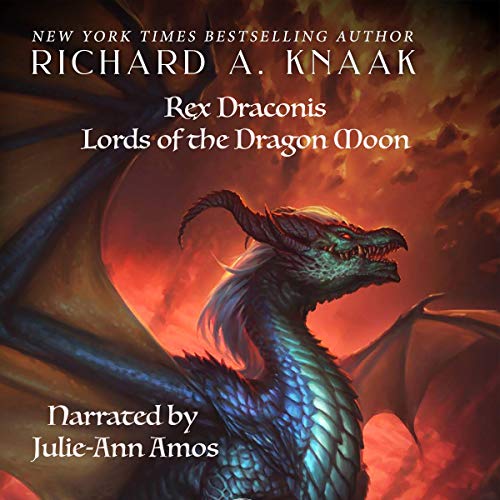 As the Shatter's fiery influence spreads from across the sky and Aryon seeks to recover from the wheyr attack, events unfold that force the minotaur Rath and his surviving crew to remain in the port. However, as Rath turns his attention to hunting down the assassin who worked for the dread Afafni, he, the knight Erik, the elven mystic Kaldara, andothers discover themselves caught up in a fantastic plot to subvert the very will of the gods and create new lords to rule over all Tiberos. But some of the gods have taken notice....

Excellent story, if a bit rushed

Here we have another great, if short, entry in the Rex Draconis Saga.

Julie-Ann Amos gives a surprisingly good performance, though there are a few hiccups.

First, and this is in no way her fault, but I have a serious disconnect with hearing a female narrator for a book heavily skewed toward male characters.

Both main protagonists are male and approximately 75% of the major characters are also male.

Now, Julie-Ann has a solid assortment of voices and accents. She has fairly good vocal inflections and adequate tempo changes.

However, like most narrators, she struggles with creating believable opposite-sex voices. Especially for those that should have deeper voices, such as the minotaurs, wheyr, and other creatures.

Which leads back to the disconnect. It's a little too easy to lose track of who's talking because it often sounds like a female voice when the male main characters are speaking.

Which, again, is in no way her fault. She just wasn't the best choice for these books (in my opinion).

Now, to the story.
This book picks up right where Under The Dragon Moon left off and jumps right into the action.

As with the previous book, we have this awesome Dragonlance-ish feel yet with some entirely new elements that keep the story fresh and exciting.

Most of the characters from the previous book return to add to their stories with only a couple of new faces, making it easy to connect with them and get invested in the new tale.

Over the course of the story we get to see a deepening of the friendship and trust between Rath and Erik, and the various magic systems are further developed.

There are some really neat reveals and twists, both in terms of plot as well as world elements that I didn't quite see coming.

My two complaints are purely a matter of personal taste.

The first is Amble the wizard. He is increasingly reminding me of a cross between Fizban and Merlin (in the quirky, befuddled, annoying presentation we see in the Disney film Sword in the Stone), which I'm finding increasingly irritating.

And the second is for a novel with this many main and major characters, we raced to the end rather quickly. I feel like there was a lot of room to explore ideas, characters, world, and plot elements, but it didn't happen.

There are somewhere around 10 point of view characters in the thick of the various plot threads, yet the story rushes along at the pace of a short, intense thriller.

I'm sure this won't be a problem for most readers, but I would have liked to see more time taken to explore those things.

Apart from feeling rushed, the ending came together well while setting the stage for an epic Saga that I can clearly see coming with future conflicts.

I definitely recommend this to anyone looking for a bit of nostalgia for 80s fantasy or especially Dragonlance in particular.