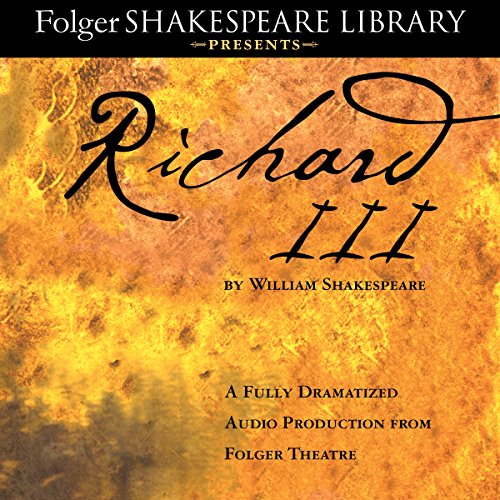 Written by: William Shakespeare
Narrated by: full cast
Try for $0.00

In Richard III, Shakespeare invites us on a moral holiday. The play draws us to identify with Richard and his fantasy of total control of self and domination of others. Not yet king at the start of the play, Richard presents himself as an enterprising villain as he successfully plans to dispose of his brother, Clarence. Richard achieves similar success in conquering the woman he chooses to marry. He carves a way to the throne through assassination and executions.

But Richard also meets resistance, most threateningly from Queen Margaret, widow of King Henry VI, whom he killed before the play’s beginning. Margaret issues a stream of curses, including one on Richard.

Gradually the curses are fulfilled, suggesting the curse on Richard may come true, too. Increasingly the play directs our sympathies away from Richard. His supporters desert him; his victims pile up. We may begin to share in the desire for vengeance voiced by Margaret.

This new unabridged audio recording of the well-respected edition of Shakespeare's classic, expertly produced by the Folger Theatre, is perfect for students, teachers, and the everyday listener.

What listeners say about Richard III

Richard is played by such a charismatic actor! You can always tell when he is speaking. He oozes the threatening menace that should be for a Shakespeare villian.

Some parts I could barely pay attention too. That isn’t the fault of the actors. More so the parts where the action slows to a crawl.

Need more coins but a good book.🐈🐹😀 like the book but it is sad😭tanks😎 like to listen to book from Shakespeare than Read them😳

Not a good performance!

The performances were amateur—mostly stiff and sounded as though they were just reading lines.