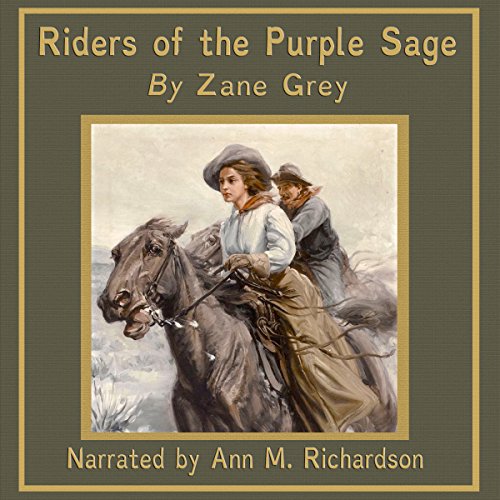 Written by: Zane Grey
Narrated by: Ann Richardson
Try for $0.00

One of the most popular Western novel of all time, Zane Grey's Riders of the Purple Sage played an important part in shaping the genre. It features all the crucial elements: adventure and rugged individualism; sex and violence; conflict and crisis; settled town life versus a rugged, wild existence.

Jane Withersteen, a sincere and faithful young Mormon woman, is persecuted by members of her own church. The as yet unmarried Withersteen has inherited a large and rich piece of property from her father. Elder Tull, an older church leader with several wives already, wants to marry her, but she does not want to marry him. She refuses him and is subsequently beset by troubles as Tull and his men wage a secret vindictive campaign against her.

A number of friends, including Bern Venters and Lassiter, a famous gunman, do their best to help Withersteen, but her strong religious convictions blind her to Tull's complicity and compel her to persuade Venters and Lassiter not to kill her adversaries, even as they are slowly ruining her.

Ann M. Richardson's sweet voice, with its hint of a Midwestern accent, is the perfect narrator for this new recording of Riders of the Purple Sage.

What about Ann M. Richardson’s performance did you like?

She is perfect for this book! Amazing performance!

Riders of the Purple Sage is one of the most iconic books in the Western genre. Written by Zane Grey and published in 1912, this adventure on the American Frontier was his bestselling work. Last month we’ve seen the release of a new audiobook version performed for the first time by a female narrator, Ann M. Richardson.

The story follows Jane Withersteen, a young and faithful Mormon woman who is persecuted by members of her own confession. Being the recipient of a huge inheritance from her father, Jane finds herself in a lot of troubles because a powerful man in the Mormon community wants her to be his wife, but she loves someone else and here the problems start.

I won’t go more than this into the plot, suffice to say that the story is filled with love, adventures, great characters, sex, romance, gunfights and a few mysteries. I was a little taken aback by some of the sex scenes, didn’t know authors in the 1900s will go into such levels of detail when it came to carnal pleasures. But, I guess that I can see why this was a defining book for the genre.

There are some really well developed characters that I enjoyed very much. , like Jane herself, the gunslinger Lacitter and Burn Venters. Also the author describes the American Frontier in such vividness that you feel like you are physically there and seeing it all with your own two eyes.

There are a lot of audiobook versions of Riders of the Purple Sage by Zane Grey but I consider this to be the best! Ann M. Richardson delivers an amazing performance, bringing this story to life in ways nobody did before. First, the main character is a woman and the role fits Ann life a glove. With her calm, sweet and worm voice, touched by a Midwestern accent Ann M. Richardson caries the listener to times long forgotten, to times of adventure, love and honor.

She acts the story when needed, performing every scene with passion, bringing the drama to an entirely new level and I was impressed to see how well she differentiates the characters in the reader’s mind, females and males alike. On her website Ann M. Richardson sais: Let me tell you a story, and I will do it in such a way you will forget where you’re sitting… and you know what? She is absolutely right!

I am really glad I had the opportunity to listen to this amazing recording and to live this thrilling adventure after more than 100 years after it was published. Riders of the Purple Sage is the proof that some stories never age and it stood the test of time like not to many books can.

Would you listen to Riders of the Purple Sage again? Why?

Grey's books were wonderful to read and the standard all others should be held up to, but to be able to listen to someone else to read them and bring them alive is certainly a joy and yes I will listen to it again.

What other book might you compare Riders of the Purple Sage to and why?

Unless it would be another of Grey's books I can't compare it to anything.

What does Ann M. Richardson bring to the story that you wouldn’t experience if you just read the book?

To be able to close your eyes and visualize the countryside, the heartbreak, and action his characters experience as it is being read is great.

yes and no. It was wonderful to hear and get involved in while wondering what to next words would bring; yet knowing it would be just as exciting when you started it again.

I first read this book in hardback in 1958 as I waited to take my girlfriend (then wife now) to school. The book belonged to her Mother and when she noticed me reading it, I became her favorite. I read several others of his, all three of his about the Zane's in Ohio are my favorites, as I waited and while I looked forward to seeing my girl I sure did hate to put the book down.

There is no separation of church and state

Riders of the Purple Sage is a classic western from author Zane Grey. It was published in 1912 and has remained in print and popular to this day. The story is set in 1871 in the Utah territory. There is no separation of church and state. The Mormon church and it’s patriarchal society hold all power.

The main character Jane is very non-traditional for the time period and for Mormon women. She is unmarried in her late twenties. She is also wealthy because of inheriting her father’s estate. She further defies convention by refusing to marry one of the Mormon elders in the area who demand she get in line with church teachings. Worst of all, in the eyes of her Mormon neighbors, is her belief in treating all men, whether Mormon or Gentile (non-Mormon) with equal dignity.

Her property is very valuable since it has a reliable water source. Her horses are also well known and sought after. Elder Tull wants to marry her, her wealth equal in his eyes to her beauty. The local Bishop, Dyer, supports Tull in his attempt to make Jane into a respectable Mormon wife. When Jane does not jump at the chance to become another of Tull’s wives, Tull and Dyer set about forcing her by attacking her Gentile ranch hands. Without her trusted hands, Jane cannot keep the ranch functioning.

As Jane continues to fight for what she feels is right and not what the Mormon men tell her is right, help comes from an unexpected and very dangerous source. Lassiter, a gunman known for his antipathy towards Mormons and accused of killing several Mormon men, arrives at Jane’s ranch. His reputation proceeds him and causes the to resort to even more violence in an attempt to force Jane into marriage.

Lassiter is an anti-hero. He is a man who has willingly killed other men. He has a very open hatred of all things Mormon. Yet he demonstrates more honor than the religious men trying to rob Jane of her independence and wealth. The pairing of a gunslinger and a Mormon woman drive the plot to an unexpected and thrilling conclusion.

I enjoyed the book, the first Zane Grey I have read or listened to. My only disappointment was it took Jane so long to realize that the Elder and Bishop were not motivated by religion but by greed. She was naive. Other than that, all the characters were well rounded.

I had previously listened to the version narrated by Mark Bramhall. I was interested to hear the book narrated by a woman, Ann M. Richardson. Different narrators can bring different tones or emphasis to the same book. I was very interested whether the gender of the narrator would affect the story itself. I found the gender of the narrator in this particular instance did not make a difference. Ms. Richardson did a very fine job of narrating the book. After listening to the same passages read by the two different narrators, I found I enjoyed them both. If this is an edge at all, it goes to Ms. Richardson. Her voice is very pleasant and she handles the range of voices, male/female, very well.

Audiobook was provided for review by the publisher.

We listened for less than 5 minutes

We listened for less than 5 minutes. The voice of the reader is high pitched. For us it was unpleasant. We downloaded a different reading and enjoyed the book. To me her voice was annoying.