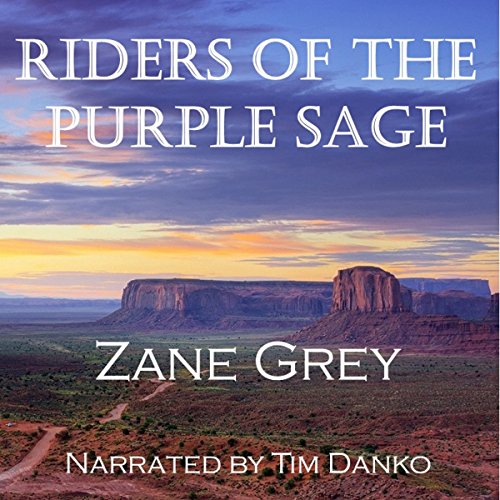 Written by: Zane Grey
Narrated by: Tim Danko
Try for $0.00

Set in Utah during the spring and summer of 1871, Riders of the Purple Sage, by Zane Grey, is considered a classic of the Western genre. Yet it's more than a Western story. At its heart it's a story of redemption and the discovery, then loss, of paradise as two couples tread a shared path through tragedy to find love.

Jane Withersteen and her friend, Venters, find themselves at odds with the local Mormon church leaders, who covet her vast and valuable property and, at the same time, despise her deep friendship with Venters, a Gentile. A stranger, Lassiter, enters their lives while searching for his long-lost sister and becomes Jane's protector and Venters' mentor. Soon afterward, Venters is thrust together with a girl named Bess, and the four of them discover how their lives have been intertwined for years.

Riders of the Purple Sage has been adapted for feature films five times. Grey's hero, Lassiter, is considered one of the first antiheroes and the foundation for late Western figures including Shane, Zorro, and the character Chris in The Magnificent Seven.

Zane Grey published a sequel in 1915, The Rainbow Trail, about the unfolding of life for Jane and Lassiter.

You will be transported back to the Wild West!

This is an excellent rendition of Riders of the Purple Sage. I have listened to other audio recordings of this book before, but this one is the best by far! Tim Danko captures the feel of each character and brings them to life.