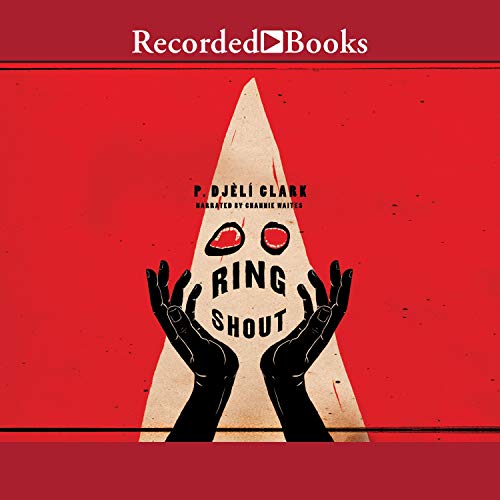 In 1915, The Birth of a Nation casts a spell across America, swelling the Klan's ranks and drinking deep from the darkest thoughts of white folk. All across the nation they ride, spreading fear and violence among the vulnerable. They plan to bring hell to Earth. But even Ku Kluxes can die.

Standing in their way are Maryse Boudreaux and her fellow resistance fighters, a foulmouthed sharpshooter and a Harlem Hellfighter. Armed with blade, bullet, and bomb, they hunt their hunters and send the Klan's demons straight to hell. But something awful's brewing in Macon, and the war on hell is about to heat up.

Can Maryse stop the Klan before it ends the world?

What listeners say about Ring Shout

Daaaamn, this was an excellent listen. The entire story is well constructed with some of the most interesting characters I've ever had the pleasure of encountering. Women with distinct combat skills hunt "Ku Kluxes", which are non human monsters pretending to be human. Raises a lot of good questions about justice vs revenge. And hoooooooly shit, the reader. The reader, sorry, *performer* for the audiobook strode past my standards and made herself a platform an Olympic size swimming pool away from my old standards. Channie Waites sings, has distinct character voices, hits every sound effect, and generally made me feel like a friend was telling me her own story. I can't say enough good things about her.

I would think anyone who loves Lovecraft Country TV show would absolutely adore this. This is easily my favorite book of 2020!

I purchased Ring Shout, anticipating a vivid world, populated by fascinating characters, because it's P. Djeli Clark after all. He has this ability to create characters I can both identify with and relate to, no matter how different their world is from mine or they are from myself. I guess that's the mark of a brilliant story teller. I'm always on the look out for anything he publishes and haven't been disappointed yet. This story is unique, like his others. Set post WWI, he recreates the feel of the time, the social structure, the gravitas of the situation and adds the supernatural to heighten the threat of what's at risk of being enacted, the KKK coming to power in the country. (I researched Birth of a Nation, chilled by the movie's message and influence on society at the time.) The book has a bit of a feel like a documentary, with interviews at the start of the chapters from people who participated in a ring shout, that adds validity to the events that unfold in that section. As the story grows there's also a deep attachment to the characters, warts and all. Great story and Channie Waites' narration is _fantastic_. I especially liked how she perfectly captured the lyrical beauty of a song's description and then illustrated it by staying in character and singing their lines. Wow. Well worth the credit.

I Loved everything about this book!!!! The storyline, the characters, I loved the way you can take this story and line it up with things in the past , current events going on . I suggest this book to Everyone especially African Americans ( black forks )😁and to all others living in American!!! Just Love it!!!!

Loved this story! Characters worked so well together. Hope it turns into a movie! Left me wanting more especially since “there’s another sword for that.”

Award-winning author P. Djèlí Clark, in a segue from the rich worlds of the djin, wades into Lovecraftian horror and merges it brilliantly with the horror that is the Ku Klux Klan. Set in Macon, Georgia in the year 1922, Ku Kluxes are carnivorous demons who travel with the white folk in sheets and three black women, Cordelia ("Chef"), sharpshooter Sadie, and Maryse, a young woman possessed of a horrifying past and a magical sword that channels the lives of other wronged individuals who came before her, are determined to take the Ku Kluxes down to protect their community. You know they will succeed but the path will be treacherous, filled with loss and the painful memories of Maryse's past, all rooted in the Jim Crow-era deep south. If you loved "Lovecraft Country" this novella is bound to appeal. Come award season next year, you are going to see this on everyone's list! Clark's inventive and lively writing deserves every bit of recognition. I listened to the audiobook, narrated by Channie Waites, who does a fabulous job bringing this story to life. Sung passages add richness to the story. I received a digital review copy and a digital audiobook copy of this book in exchange for an honest review.

The best story from a master mythmaker

Ring Shout is one of the most gut wrenching stories I've ever experienced, in a good way. One chapter in particular, in which Maryse Boudreaux confronts her deepest pain, tore me apart and put me back together again. This is a story about love, camaraderie, surviving trauma, and the power of righteous anger to remake the world. P. Djeli Clark has become an autobuy author for me on the strength of his worldbuilding, myth-making, and how he writes fully fleshed-out female characters. At first I wasn't sure all the elements would gel - the history of the KKK, African myth, Lovecraftian monsters, and Gullah magic. But when he pulled everything together, it created something astounding and special. Ring Shout is a fresh take on the old tale of good confronting evil that centers the experiences of people of color. I thought it was his best work yet.