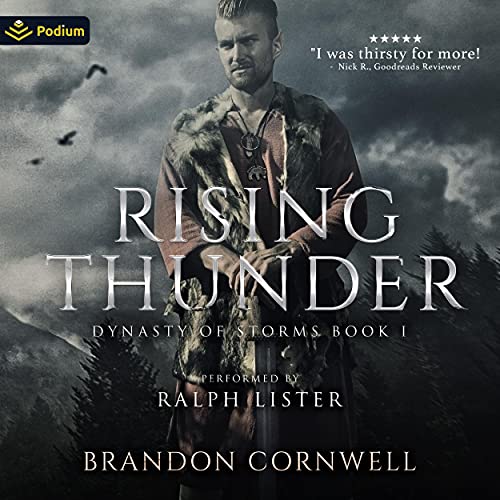 Written by: Brandon Cornwell
Narrated by: Ralph Lister
Try for $0.00

Elias is no ordinary elf. A giant amongst his kind, he dwarfs not only his fellow elves but the taller, stronger humans as well. Cast out by his own kind, he was sent to live amongst the Northmen at a young age, learning their ways and culture, but never wholly accepted by them. When his oldest friend, King Brynjar, dies in his old age, Elias's position among the volatile men of the Northlands becomes tenuous, and he sets out to make his place in the world.

Far to the south, a war is brewing between his homeland of Lonwick and the demonic Felle, an army of orcs, ogres, trolls, and men. Should he stay to the north and avoid the conflict, or should he travel south and join the forces that are defending his homeland? Who is the shadowy dark knight that hunts him? And will he ever find people in this world that see him for who he is, and not the freak he appears to be?

From the warm, forested slopes of coastal mountain ranges, to the tropical shores of exotic islands, author Brandon Cornwell leads us on an adventure filled with battles, magic, love, and loss. As Elias faces the journey before him, rich characters and vivid settings transport us into a world that feels as real as it does fantastical.

What listeners say about Rising Thunder

Pretty good book. I enjoy the characters. Didn’t appreciate the level of detail for the sex in chapter 12. Unnecessary and makes me not recommend the book to others. Please avoid in next books.

I have to admit, the premise of this book, the idea of a giant outcast elf, really spoke to me. Unless we are talking Drow, most elves are the Tolkien ideal: A graceful, wise elder race set on the world to guide the younger races, or at least to look down on the short lived fools. Only in more recent works like Paul Lavender's The Eighth God has a new, more callous approach to elves been taken. This writer takes it to an even greater length.

Elias is a giant of an elf. at over seven feet tall, he towers over both elves and humans. in fact, other than giants and ogres, you won't find many creatures taller than he is. He is also strongly built, not the lithe, graceful elf that is typical of his kind. Exiled to the mountain humans in the North (this worlds analogs to Vikings) He has lived there for over 60 years, although in elf years, at 167 years of age. he is hardly more than an older teen. While he is accepted as a ward of the King, he is not trained any more as a warrior than he was with the elves. He goes on no raids and is not an advisor to the king, just a friend.

As the current king dies, a power play takes place, and Elias is forced to leave for at least a year by the King's son a he sorts out the potential usurpers. He can come an reclaim a place in a year, assuming the new king is still on the throne.

After leaving and deciding to head to the human lands, Elias is accosted on the road by a huge man wearing armor and wielding dark magic. He is only saved by the intervention of a mercenary troop that happened to be passing on the way to a job. Elias then joins the group, who specialize in guarding caravans and nobles. Their next job involves guarding a noble on a trip, but this goes horribly awry when he betrays them and sells them to pirates as galley slaves!

Leading a breakout by the rest of the slaves, Elias and the slaves finish the ships journey to the islands they were headed to. Elias finds out one of his fellow slaves, a sea elf (blue skinned elf), is a local chieftain, who invites him to stay with his village, since he suspect Elias is the answer to a prophecy. That prophesy involves an outsider saving the islanders from the pirates who have been preying on the islanders for decades. Elias also meets the chiefs daughter Coral, who he is told is part of the prophesy as she is slated to bear the chosen ones son. The young elves relationship grows from there.

What follows is a few seasons of mayhem and chaos, as Elias and the crew of mercenaries and islanders he recruits go after the pirates, both on the sea and on their island strongholds. They survive many battles and ambushes, and after a huge and tragic setback, they finally have the forces and a plan to attack the Pirates main base. The attack also brings out the mystery man who attacked Elias so many seasons ago, and they finally face off and some painful revelations are made to Elias. After the battle, Elias has some difficult decisions to make about where to go with the rest of his life, and with his men. He makes a decision that will have long lasting repercussions for much of the world.

I really enjoyed this book, the characters, especially Elias and Coral, are really well drawn out. The plot is fast paced, but takes time to flesh out and give interesting story lines to the various characters. The various locations are well described, and you really get a good feeling about how they appear, as well as the character descriptions, such as the difference in elf sub-types, like the sea elves having blue skin and Elias's tribe having reddish. There are also a few surprise elements to the plot, and they are quite fun for a pretty grimdark story. The ideal about the injustice of prejudice, overcoming odds, and finding happiness are all at play throughout the story, and are excellently portrayed.

One warning. This book does have some graphic sex scenes between Elias and Coral. They are integral to the story, not just tacked on, or so it seemed to me, but this may be a turn off for a few readers, so be forewarned. I didn't see anything objectionable about them, since it is consensual sex between two elves, both over 150 years old.

Ralph Lister is in top form on this one, bringing his substantial chops to bear on a complicated story with many different characters, with multiple accents. He handles them all well, and his narrative pacing is great. He really kept the story moving along, and gets the listener really into each of the characters.

This is one of those stories that will appeal to a broad variety of fantasy readers, whether they like epic fantasy, swords and sorcery or grimdark. I can't recommend it highly enough, because it is a fantastic novel for a debut writer, and things will only be getting better from here!

I liked the story. I wanted to love the novel but gross overly graphic sex scenes turned this otherwise good book into filth.

So this is actually a well written book. For the first 6 hours I thoroughly enjoyed it. And then, without warning and because why not apparently, Cornwell throw's in one of the most vivid sex scenes I've ever read/listened too. And I'm not talking like some short snip bit, I mean an all encompassing five minute long section of book with full narration. And while the idea of the scene might be relevant to the story in regards to buying the main character to the cause, it's incredibly unnecessary and terribly surprising in it's length and detail. I honestly would have given this book closer to four stars, but this scene took me completely by surprise and I'm not going to be able to finish the book because I feel awkward now.

Had I known about the scene ahead of time, then I would be fine. But now it just feels weird. And I've seen reviews where the first is not the only of such scenes.

So if you're willing to take the sex in stride and are fully prepared for it, it's a fine book and please enjoy it.

The narration was just fine.

Good start of a series

Good one. I’m looking forward to the remainder of the series. A bit of a twist on a old tale.

Quickly hooks you into the storyline.

Fast paced with great characters. You get to know characters well and what makes them tick. Hurrying onto the second book.

I have thoroughly enjoyed the other series by this author and I was looking forward to reading this one. Sadly this book was dull, tedious, and banal.

it just doesn't grab your attention.

It just isn't that much fun. I would describe it as blah. I'll forget this book in about 5 minutes and not read book 2.

I can't wait for the next book!

I really enjoyed the book and thought it was better the further along the story developed.

Here it is, I thought that the story was great, until the MC got captured on a slave ship, then freed himself. He then left his swords on the ship and refused to ask for one of them back because a woman had it. This about the fact that one of them was worth over 100 gold and the most gold he ever had was 25 gold until be became a mercenary. His other sword was elven steel and he left it, I couldn't get past this and it made me unable to follow the story because of the crazy moves this guy continued to make, that to me makes this book garbage. I understand that somethings have to be unrealistic, such as elves and orcs being in the book, but whenever you talk about human nature and someone acting completely different than they should it ruined the story for me. I couldn't get back in after that, then he makes a decisions based on another woman. I don't think this is for adults, its for teens because the sex scenes have more detail thank the entire fight and other scenes.