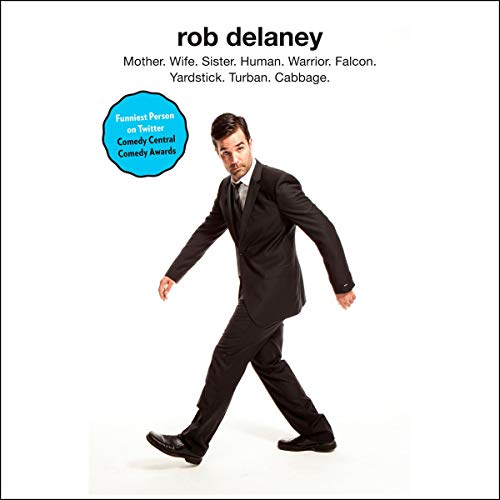 From a Deadpool 2 fan favorite comes a “hilarious, raw” (Rolling Stone) memoir about love, sex, parenthood, work, substance abuse, and everything else that makes life wonderful and/or horrible.

Rob Delaney is a comedy superstar. But if you’re ever watched him steal scenes as Peter in Deadpool 2, binged his streaming series Catastrophe, encountered his raunchy and mischievous Twitter presence, or witnessed the hilarious and painful sharing he does in his stand-up, you already know that. In his first book, he traces his journey from middle-class theater geek to public menace to devoted family man and passionately engaged model citizen - from his youthful obsession (and pen pal relationship) with heavy metal band Danzig and an episode of drunken bungee jumping off the Brooklyn Bridge, to his court-ordered stint in rehab and the miracle of his son’s birth. All together, these essays make clear why it is he is so darn lovable - and so f#!%ing funny.

“Unlike some books by comics, Delaney’s volume offers a rich, deeply considered (and yes, funny) look at his life.... A great read by any standard, but even more so for including stories about needing (and failing) to find a bathroom while jogging.” (E! Online)

“One of the most hilarious bundles of words we have ever read.” (Vice)

“A book as funny, sincere, weird, wet, and wonderful as Rob Delaney himself.” (Jimmy Kimmel)

“Delaney has a knack for pinpointing what’s hilarious and sad about adolescent bed-wetting and his own abundant body hair, but somehow the darkest chapters [in this book] make you laugh hardest.” (Entertainment Weekly)

“Rob’s transition from tweets to book is like a gold medal sprinter winning the marathon the next day. I am jealous and angry.” (Seth Meyers)

“WARNING: This book may cause involuntary seepage. Some funny, funny, funny, funny s*** from the most dangerous man on Twitter. The fact that he’s just as funny in long form makes me want to vomit with envy.” (Anthony Bourdain)

What listeners say about Rob Delaney

I loved this book!!

What did you love best about Rob Delaney?

This book was amazing! It made me actually laugh out loud and it made me cry; it completely drew me in and I was lost in his story. I listen to a ton of audiobooks and not only is Rob Delaney a fantastic writer, but he also is a great reader and I loved listening to his book. I crushed the book in one sitting because I literally couldn't put it down, or in this case, stop myself from listening to it. I highly recommend this book!

A fun journey with Rob Delaney

Where does Rob Delaney rank among all the audiobooks you’ve listened to so far?

This was perhaps one of the most enjoyable audiobooks I've listened too in a long time. Rob narrating really adds to the story as well.

Having been a fan of Rob's Twitter page, and then his stand-up, it's awesome to hear stories about the life experiences that give Rob's comedy its edge.

It's a fun and funny listen, and I've recommended it to everyone I come in contact with.

I hope Rob continues on his trajectory and keeps writing and performing. He is an inspiration.

Would you consider the audio edition of Rob Delaney to be better than the print version?

I haven't read the print version, but as I listen, I love the sound of his voice as he's reliving all of the episodes in the book.

It sucks you in from the beginning and keeps you enthralled straight through to the last word. I didn't want it to end. Compellingly and smartly told - sad, cerebral yet ultimately uplifting.

Have you listened to any of Rob Delaney’s other performances before? How does this one compare?

I don't think the title should/could be added to.

For the millions out there who have been to those dark places, thanks for sharing and enlightening and giving a glimmer of hope.

What made the experience of listening to Rob Delaney the most enjoyable?

Rob Delaney is famous for sending offbeat messages to companies and corporations on Twitter. The man behind the page, though, has an incredible story. Having struggles of my own with addiction and depression, it was wonderful to hear him speak so candidly about his struggles and his process to find peace with himself.

What was one of the most memorable moments of Rob Delaney?

Jumping off the Brooklyn Bridge - his storytelling ability is absolutely breathtaking.

His honesty - it's just unbelievably refreshing.

I absolutely, completely loved this book. If you approach the book anticipating Rob's Twitter persona, you'll find some of it - but maybe not as much as you might expect. Trust that this is a good thing. He tells his story with as much comedy as appropriate - serious when he needs to be, then lightens things up again with some of his trademark comedy.

Lucky to be alive

I've listened to a lot of comedians' memoirs. They all serve up stories explaining childhood misdeeds, scars, relationships, regrets, and careers turns. In Rob Delaney's case, there quite a few stories that show he's lucky to be alive (and knows it). How enjoyable each memoir is depends on how much you like and relate to the stories and their teller. For me, this book is my favorite since Bossypants, both because I love Delaney's sense of humor and because I'm almost the same age, so I was delighted to hear a few random, quirky similarities in our experiences. I'm sure this book won't work for everyone, but I loved listening to his stories. I just wish it were longer.

I'm a fan of Rob Delaney's über-successful twitter account, and while I was expecting to be amused by his book, nothing could have prepared me for the hilarious emotional bulldozer hidden within. In between funny jokes about trying to impress his French teacher and pooping on a strange lady's lawn, Rob breaks out with balls-to-the-wall raw truth about his self destructive past: drunk driving, alcoholism, daredevil stunts, life-threatening injuries, rehab, and suicidal depression. (Wait, isn't this supposed to be a funny book?) The length of a book gives Rob Delaney room to use his weird humor to excavate truths and reveal himself as a whole, flawed person with genuine regard for other human beings. And who also likes to tell jokes about pooping. I loved this listen so hard.

Rob Delaney is simply wonderful. It almost doesn't matter what he's saying, since hearing his voice is entertaining enough, but my god. I promise that you won't be disappointed.

In addition to the humor and a nicely written personal story, Delaney shares about his battle with addiction in a helpful, reflective way that can help both addicts and those close to them on the sidelines.

Inspiring Memoir - But Not a Joke Book

The book is a collection of anecdotes, and Mr. Delaney does a good job in selecting interesting, unique episodes to share. I appreciated most the moments of vulnerability and honesty scattered through the stories, such as his reflections on housemates he left behind at his stint in a halfway house.

Unfortunately, there is a lack of balance in the stories recounted; it felt like 80% of the book was dedicated to episodes of bedwetting and war stories of alcohol driven misadventures. I also found that the book's organization - more specifically, the lack thereof - made the overall listening experience disjointed and distracting. The stories bounced back and forth between different periods of his life, and I found it jarring to hear him wrap up a chapter on new found sobriety only to suddenly jump back to more stories of drunken blackouts. A chronological telling would have suited this book better, in my opinion.

I have enjoyed Mr. Delaney's acting and stand up performances, but I was disappointed in his narration of his book. Much of the book is read in a near monotone, and keeping engaged with his storytelling was difficult through many of the chapters.