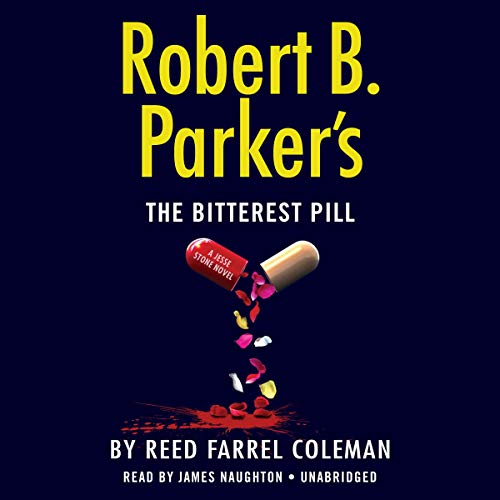 Robert B. Parker's The Bitterest Pill

The opioid epidemic has reached Paradise, and Police Chief Jesse Stone must rush to stop the devastation in the latest thriller in Robert B. Parker's New York Times best-selling series.

When a popular high school cheerleader dies of a suspected heroin overdose, it becomes clear that the opioid epidemic has spread even to the idyllic town of Paradise. It will be up to police chief Jesse Stone to unravel the supply chain and unmask the criminals behind it, and the investigation has a clear epicenter: Paradise High School. Home of the town's best and brightest future leaders and its most vulnerable down-and-out teens, it's a rich and bottomless market for dealers out of Boston looking to expand into the suburbs.

But when it comes to drugs, the very people Jesse is trying to protect are often those with the most to lose. As he digs deeper into the case, he finds himself battling self-interested administrators, reluctant teachers, distrustful schoolkids, and overprotective parents...and at the end of the line are the true bad guys, the ones with a lucrative business they'd kill to protect.

"Exceptional.... Coleman stays faithful to the spirit of Parker’s characters without sticking to the status quo." (Publishers Weekly (starred review)

What listeners say about Robert B. Parker's The Bitterest Pill

I am glad Dr. Parker can't see this review,..

...though knowing him a bit, he'd likely have appreciated it. This particular book, for me, is the best thing Reed Farrel Coleman has done and again. for me, this is the best in the Jesse Stone series. Of course everything was set up by Dr. Parker but the faithfulness taken with the characters, the history and the whole atmosphere was remarkable. It is almost hard to imagine this wasn't done by Dr. Parker. All that aside it is a great stand alone novel. I am willing to bet James Naughton thought he was back in time. I hope the series continues.

I refuse to belive that Robert B. Parker wrote this book. First of all, it's so darn difficult to get through the first couple of chapters because of the tragedy - It doesn't just state the tragedy, but drags every single detail of that tragedy out through several chapters. Parker started out his books with comedy of some sort or another - a client wanting to hire him and comedic, sarcastic responses would ensue - not here. This book was so awful and the narration even worse. This was my first foray into the Jesse Stone books and will be my last. Spenser was much more lighthearted, funny and had Hawk.

I know a lot of people complained when Robert B Parker's characters were handed over to new authors after his death, but you can tell from this book and others written by Coleman, that he truly "gets" the characters. He has progressed the character of Jesse Stone at a natural pace, not overhauling it, but adding to the depth that was already there. It goes without saying that Naughton does an excellent job as always.

Compared to previous books in the series it seems way more harsh (like detailed torture). It just feels depressing and twisted.

Another excellent book by Reed Farrel Coleman. Also excellent narration. I look forward to the next bool in the Stone series!

Written as if Robert Parker was dictating. Many plots ,characters that keep you involved to the end. Hope the next book will follow soon.

An outstanding member of the Jesse Stone series.

If you’re a fan, I highly recommend.

A welted story with twists and turns and added character development to those who make this PPD ensemble.

not quite a Robert b parker

the essence of Parker is here, but not quite the same thing. I guess I am spoiled from watching the Jess Stone TV productions. I kept waiting for Tom Selek's voice. Jesse just seemed a bit off. I'm stuck on Jesse stone so I will listen to more.

Well written & well read.
Jesse Stone & crew move forward while struggling with some of life’s pain.
All while sorting out a drug fueled mess, with bodies piling up in Paradise.

Another very good book of the Jesse Stone series. The narrator did an excellent job on this Jesse Stone book.