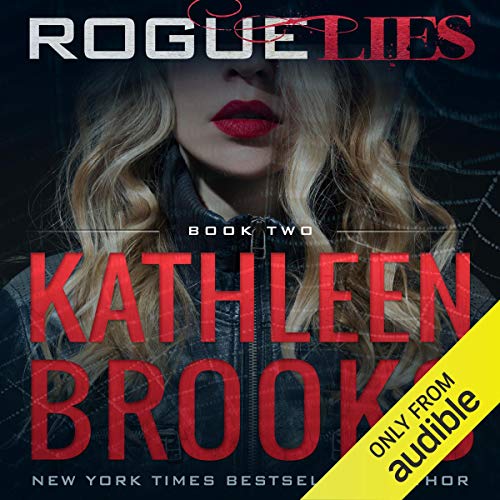 Written by: Kathleen Brooks
Narrated by: Therese Plummer
Try for $0.00

The secret investigative group that Tate Carlisle works with has just discovered a major piece to the puzzle. Those responsible for trying to steer the governments of the world from the shadows are slowly being unmasked. While Tate has never stepped on a battlefield, she is most definitely in for the fight of her life.

Tate's new job as White House press secretary puts her in the line of fire from all sides. When she finds herself falling for her boss, the president of the United States, Tate is torn between her job, her duty, and her heart. She decides to put all of the cards on the table in a gamble that could end everything she has worked toward her whole life.

Tate finds herself deep in the secret world of payoffs, affairs, and a battle for the soul of the United States. Split-second decisions are now a matter of life and death...but will the next lead story be about her death or those she cares about?

What listeners say about Rogue Lies

Wow, another exciting book in the Web of Lies series! It is intriguing, action packed and has a nice romantic storyline. This book definitely left me wanting more! Looking forward to the next book in the series. Therese Plummer does a great job at narrating.

Thus was an exceptional audio book. The Narrator was absolutely rivetting and the story had me on the edge of my seat. An-t wait for the next instalment in the series!!

Wow! The first book introduced all the players, well, most of them, and it showed what kick-butt agents of the President, Lizzy and Dalton were but this book got down to the nitty-gritty. All the bad guys they rounded up, or killed, though still not the &quot;spider&quot; yet. Everyone was just amazing.

And then there was the love story that came about, not only between Lizzy and Dalton, but between Tate, the press secretary, that went from being an airhead beauty queen to being a real asset to the team, and bachelor President Birch Stratton. It was there but neither love story overpowered the true story.

This was as great as the first one and I hope to hell we don’t have to wait a year for the next book since this was such a BIG cliffhanger. (Just checked and the next book will be out in October. UGH!)

I’m not going to fill this one with all kinds of spoilers like I did the first one. I can only encourage you to read them if you’re looking for a romantic suspense.

There was foreplay, without sexual tension, then fade-to-black. It kind of all fit together just fine. And the F-bomb was used 19 times.

As to the narration: Therese Plummer is almost perfect. Needs to lower her voice a little more for the men but her emotions are absolutely awesome.

Dang, I wasn’t really a big fan of book one and wasn’t going to pick up book two but it was under political for a challenge I am doing and thought oh why not.

Well, it only gets hotter and more mysterious. But I loved how the story unfolded and we kind of had two love stories. We get all the characters we love from book one but with so much more.

From the Mr. President to the press secretary to Ex FBI agents, and so much more you’re thrown into the action and you can’t help but keep listening because each piece is just enough to make you want more.

Oh and we can’t forget the narration Therese Plummer KILLS it so freaking good.

A political drama that turned into a melodrama

Disclosure - I DNF this after reading 50% of the book

How disappointing! My book rut continues.

This middle book of this trilogy (Web of Lies) falters. The first book had an intriguing premise and set a good foundation to move the story forward; however, it failed to develop almost all the secondary characters and was inconsistent in the characterization of the characters we've already been introduced to. It focused on one of the elements being manipulated by the shadow group, the media, and that works to an extent. However, it failed in expanding, exploring, and explaining the complex motivations of what a group such as this is trying to achieve.

Sure, it wants to create chaos in order to further their ideology, but not all the people in the group can feel exactly the same. There has to be competing wants, and having that complexity would have made the story more believable and also given it more depth. It might get explained later in the book but I honestly wasn't interested enough to continue reading.

The writing is still strong (the storytelling not so much). I like the idea of putting the limelight on the media and how it's owned by major corporations with many parent companies. So what should be a service to the society becomes a service for the powerful who then decide what to showcase and what to hide. That's an interesting angle, that's very real in our society. But there's a lot of smoke screen.

The romance, or should I say "the romance" because if I'm being honest, the romantic paring in this book is not very romantic. Like the first book, the central romantic pairing is underdeveloped. Tate and Birch are given the insta-love treatment, which I really and truly dislike. The chemistry is not there, and I found their scenes together cringe, I actually jumped forward so I could skip most of it.

There's also the additional issues that it's a highly problematic relationship because of the power imbalance in the relationship, which can technically apply to Lizzie and Dalton, though with them, they are more equals. There is a reason why there are rules in companies about dating your survordinates; it's unethical. The power imbalance is a huge issue, and sure Birch is a good guy, and yet for two supposedly smart people, they acted stupidly. I'm not saying that people who work together can't fall in love, that's silly. There are ways to go about it having these types of relationshps, one of which is being transparent about it so as to mitigate some of the problems with an imbalance of power. Long story short, I didn't like the romance, and I didn't think it was well executed.

Also, Birch has been widowed for 12 years, what is he feeling guilty about? Give me a break.

There's also this thing Tate does, which is ridiculous as in real life, if a press secretary did that, especially a female, she wouldn't have been able to keep her job. Especially for a supposedly weak president like Birch.

Then we have the issue of women being catty towards each other. This trope has never been my cup of tea. I get Val being reticent with the new girl, keeping her distance until they get to know each other, but her continued dislike of her was unreasonable at best and catty/ mean girl at worst. It seemed silly for both Lizzie and Val to hate on Tate because she wasn't a physical fighter/ law enforcement or military. It's not a good look.

And Lizzie telling the president that she's in-charge and making the final decision. Face-palm! And of course, it's all for nothing because she just looked like an ass and also a hypocrite for thinking she can be neutral with Dalton when in the same chapter she admits she's in love with him.

Then we have issues with pacing and character motivations, inconsistencies in characterizations, plot holes, etc.

I'll stop here. I had a lot of issues with the books and the characters.

I can't recommend this book, it wasn't good and there are too many issues that bothered me that I wasn't willing to gloss over. It wasn't good enough to allow me to do that. I won't be reading book three.

Kathleen Brooks has done it again!! What a fantastic book. On to the next one in line.

I enjoyed listening to Therese Plummer narration. I'm glad she's narrating all 3 stories. This has been an exciting, edge of ur seat type series.
I'm anxious to see if I was right in the "who done it" in the next audio book " Shatthered Lies" , # 3. I highly recommend this series! 😁

This is the second book of the series and it was full of surprises and suspense galore, awesome twists and turns and love all rolled into the mix.

Now I’m needing to find out what happened to Val so I’m onto the next fix, umm, book 🤓
I’m also so used to Therese’s voice doing all the characters that I hope she is on the next book too.

Intriguing story with well-developed characters
And timely content. It does have a suspenseful story line but also includes a very nice romance.

Kathleen's Web of Lies series continues with the story of White House Press Secretary Tate Carlisle. As Tate works to unmask those responsible for trying to steer the governments of the world she finds herself falling for the one man she can't have, the President, or can she?

When her new job puts her in the line of fire Tate is torn between her job, her duty, and her heart.

Split-second decisions are now literally a matter of life and death. If she is not careful instead of reporting the news she could find herself making the news instead. No-one on the team wants the next lead story to be about her death.

Kathleen and Terese continue drawing me into this complex puzzle of a romantic suspense. The love story between Tate and the President is sweet but with a lot of heat. The plot continues to move towards what is shaping up to be an epic battle between good and evil. Roll on the next one.....