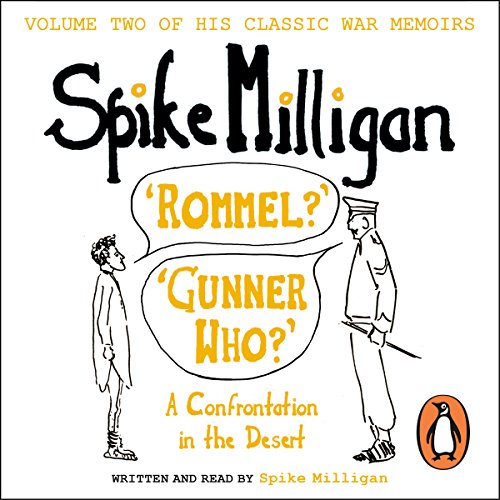 The second volume of Spike Milligan's legendary recollections of life as a gunner in World War Two sees our hero into battle in North Africa - eventually.

First, there is important preparation to be done: extensive periods of loitering ('we had been standing by vehicles for an hour, and nothing had happened, but it happened frequently'); psychological toughening ('if a man dies when you hang him, keep hanging him until he gets used to it'); and living dangerously ('no underwear!'). At last the battle for Tunis is upon them....

What listeners say about 'Rommel?' 'Gunner Who?'

This was not my favorite of Spike Milligan's war memoirs, but it is pretty good. All of them are good, but some are better than others. I read this in the early 1980s and probably missed most of the funny bits. Listening to Spike read it (and he really is great reading his books) made some of the jokes jump out at me.

If you want a straight telling of a World War 2 unit, look elsewhere. If you want to see how one person and his mates coped with a horrible experience, this is a good place to start.

I am of the opinion, and this is only my opinion, that Spike went a little mad and it started when he was in the Army. In Volume 4 of the memoirs you find out just why this might have happened. It is brilliant, funny, and tragic at the same time. Sadly, it is not yet available on Audible. Only volume 1, 2 and 7 (What?!!) are here. I hope that will change. I'd love to have the full collection. I have all the paperbacks (and possibly the largest Spike Milligan collection in the state of Wisconsin), and find enjoyment in all of them. They also provide insight into the man the BBC named "The Funniest Man of the Millennium." Listen to them all and learn about the making of the original Goon!

I truly hope he found peace. He made so many people laugh, and that's a great gift to the world.

Spike Milligan, as funny as he ever was.

The title of this should say it all, but apparently I need fifteen words in this review, so here are a few more...
You'd probably have to be a fan of Mr. Milligan to be able to appreciate the narrative. However it does give one a real sense of what your average bloke went through during World War Two. Long stretches of boredom ameliorated with a developing humour that is evident in Milligan's broadcasting career in The Goons, as well as his other productions. The boredom however is also interspersed with actual warfare..not for the faint hearted.
I tried to read the book as a youngster (12/13 years of age) and found it a bit tedious.Oh callow youth!!
Having listened to Spike reading his own words I am going to have to find the other volumes he alludes to. Needles to say, it helps that it is Spike that is reading it.
There, more than fifteen words!