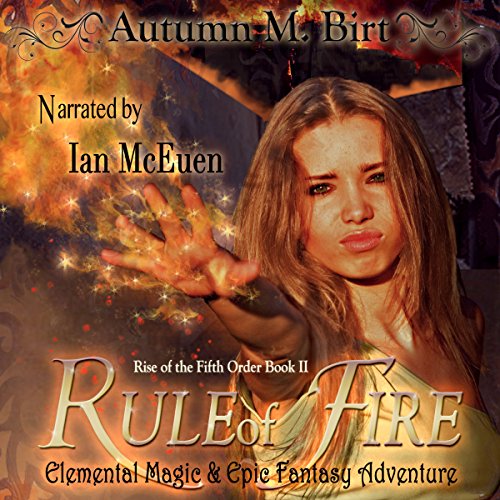 Six friends stand against the combined Orders of Fire, Water, Air, and Earth, protecting a girl whose forbidden abilities have condemned her to death. Now they are joined by a man who was once the Curse, the Church's most powerful weapon and Ria's greatest threat.

Left with no name and no memory, the decision to aid this stranger will cost friendships and more as the group of friends journey north to seek a tribe of people lost to time amid an ancient war. The path home is riddled with dangers as the Church of Four Orders still seeks Ria and the former Water Priestess Nirine. For one High Priest, the desire for vengeance is personal.

Ria must unravel the mysteries of her power to find acceptance in a world where her abilities are considered a taint. Is the strange gift of magic an aberration that should be destroyed or something far more, related to the skills held by the Elementals who rule Myrrah?

The sequel to Born of Water, Rule of Fire is the second book in the epic fantasy trilogy, the Rise of the Fifth Order, full of elemental magic and epic fantasy adventure. Return to the world of Myrrah ruled by the Church of Four Orders.

What listeners say about Rule of Fire

It took a bit to grow accustomed to the different narrator, but it was worth it. There was much better differentiation between the characters. The story itself is well-written and action packed. I'm back to disliking the character that was getting on my nerves in the first book. I hope he gets over himself soon.