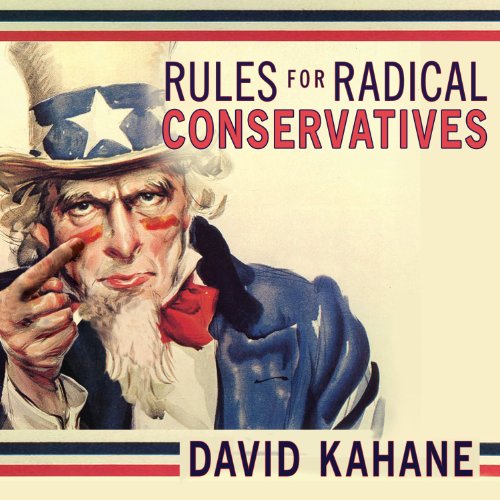 The vast right wing conspiracy has found its General Patton, and his name is David Kahane. Kahane's pseudonymous, satiric column for National Review Online, lampooning the Left via his Hollywood-radical persona - Stephen Colbert's liberal doppelganger - is must-listening for political aficionados of all stripes.

Now, from the inside, Kahane proudly exposes the secret and not-so-secret winning strategies (and vulnerabilities) of the Left and gives desperate conservatives a roadmap to victory, in a take-no-prisoners manual modeled after Alinsky's Rules for Radicals, C. S. Lewis' The Screwtape Letters, Machiavelli's Prince, and, of course, the Chicago Way.

What listeners say about Rules for Radical Conservatives

I am most of the way through this amazing book

It is revealing to read or listen to this book to understand how those on the left have taken over our institutions, governments and indeed most of the mainstream media. While there is too much sarcasm in the book for me, it is nevertheless an essential read (I am listening on audible every day during my workout) for anyone concerned about the future of our democracies. I recommend it very strongly indeed.

I tried 4 times over a period of years to get through this book. I don't find the humor or anything to keep me interested.

Would you try another book from David Kahane and/or John Allen Nelson?

I was looking for a book that would provide insight into dealing with left wing ideologues. I was hoping to find a book that countered Saul Olinkys Rule for Radicals. This was not it.

Would you ever listen to anything by David Kahane again?

I wouldn't be likely to consider buying another book from this author.

I found no useful information coming from this book

Don't be Fooled, This One's a Real Sleeper

I'll be honest it took me about one or two hours of listening to "Kahane" beat me over the head with his sharp wit and sarcasm before I was finally able to move beyond the snarkiness and "get it".

Kahane leaves not a stone unturned as he rips Alinsky politics apart point by point, showing conservatives how to beat the left at their own game without losing your integrity in the process.

I encourage anyone who want’s makes scene of our political landscape to read this book. Freedom isn’t free! It’s a continuously fought battle!

Excellent description of the political battlefield

What made the experience of listening to Rules for Radical Conservatives the most enjoyable?

I really had never heard anything like this before. This man analyzed the parts of the political debate and how the left has succeeded in mastering the process. The right has simply showed up to the game and thought since they obviously had the best ideas they would win. The author shows that having the right ideas is not enough since most of the people who vote can not articulate a rational reason for their choice. Something else motivates them to vote, and the author shows us some of the tactics that need to be used.

You could listen to this book in a sitting, I listened to it on the road in my truck.

A fun listen and very in sight full. Skillfully written in the style of the screw tape letters. The author care more for Lincoln and Truman than I do, but still a good listen.

At the very beginning, I didn't think that this approach to the subject at hand would be successful or interesting. Mr. Kahane, I was wrong and I apologize. This is a masterpiece!

If you seriously want to help save America, then you must listen to this book!

It's All between the lines

Yes, The right needs to know why!

What about John Allen Nelson’s performance did you like?

Must Read if you are on the Right

Important for readers to understand this Presidential Election Cycle. George Soros determined to take America to the ONE WORLD ORDER! Hillary will follow Obama in this effort. She is a Saul Alinski follower.