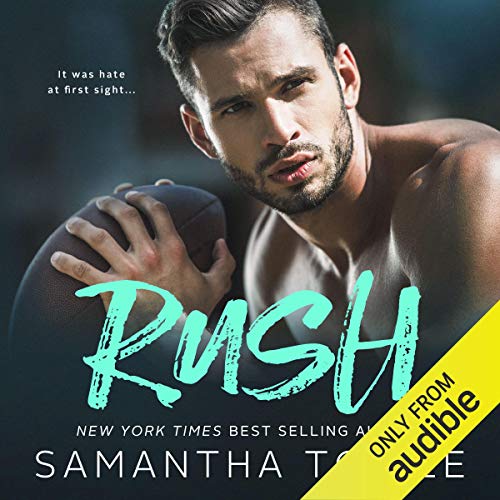 Written by: Samantha Towle
Narrated by: Brooke Bloomingdale
Try for $0.00

It’s been three years since quarterback Ares Kincaid’s NFL dream came true, and he’s living the high life. The days of cleaning up after his drunk of a father are long gone, and he has no intention of going back.

A car crash and DUI charge meant a lengthy stint in rehab for Arianna Petrelli, and her dream of being a professional artist slips further away when she’s sacked from her position at a gallery. Her need for a job stronger even than her dislike of football, Ari goes to work for her father, the head coach of the New York Giants.

Ares hates alcoholics, which is fine with Ari because she thinks he’s a brainless jock. Yet when Ares rescues Ari from a situation with her ex-boyfriend, an unlikely friendship begins - one that quickly becomes more.

But messing around with the coach’s daughter can only lead to one thing...trouble.

What listeners say about Rush

Wow! All the feelings!

I really enjoyed this book. There were so many emotions. I have been sober for 15 years and I related so much to this book. All I can say is wow. One of my favorites.

This is such a great love story. A girl on a road to recovery and a football player with issues of his own. I loved they did a lot of development on the girl and her dad!

Brooke did a great job on the narration!

Great story !! Worth the credit. Finished it in 2 days. I will be checking out more from this author. Narration was wonderful too. ♥️

I loved th story of Zeus and Cameron. I liked the Cam didn’t immediately fall back in to Zeus’ arms when he returned. She made him fight for her and prove that he was in it for the long haul. GiGi was cute and I loved her and Zach’s relationship.

Problem I had was the was only one chapter from Zeus POV. It was not a dual POV book. The male narrator was only present in chapter one and gone. Next the audio was messed up. There were clear breaks in the recording and the recording was jarringly different and some times sounded like it was in a cave. It made the narrations lousy at times.

The narrator is usually one of my favorites. This book is an exception b/c the narrator reads in a weird, robotic rhythm. It alters between regular narration and an anxious play by play. Maybe the writing style with so much internal dialogue contributes to the awkward listen. Other than that it’s a good storyline.

This was enjoyable and good, I really loved the story it was quick but that's okay. This story even though it wasn't this long drawn out affair, yes had some drama. Yes it was simple and touched some hard subject matter but mostly was a good quick listen. It can be listened to or read as a standalone too. So there is no issue if you didn't listen to Ruin first. Really enjoyed this.

This was a great quick listen. While some of the minute details were slightly unbelievable, it didn’t bother me. I enjoyed the relatively low angst of it too! Definitely would recommend


Rush was an emotional and angsty read about Ari who is a recovering alcoholic who is trying to put the pieces of her life back together,and Ares Kincaid, a professional football player who plays for Ari's father's football team. They get off on the wrong foot during their initial meeting, but it is clear from the start that their chemistry is off the charts hot, hot, hot!!!

My heart went out to Ari throughout this book because it seemed like she was really trying but kept hitting roadblocks and Ares wouldn't give her a chance based on his own past and personal bias.

I really enjoyed the moments throughout the book in which Ari and Ares got to know each other and bantered back and forth and watching their friendship grow. I also really enjoyed how Ari and her dad were able to rebuild their relationship.

This book had a great set of characters, a fantastic story line and strong writing. A highly enjoyable read all around!

I am a big fan of Brooke Bloomingdale. She is very easy to listen to and does a great job with narration. I think she did an amazing job as Ari and Ares and really brought about the emotion of the story.

I loved this story. I loved how strong Ari is in her choice to stay sober and in how she handles Aries’ nasty attitude and treatment of her. And in the end I loved the honesty between them and how they got to that point. As for Aries, I loved his humor and how quick he willing to be vulnerable to let Ari know when he’s messed up with her and he really does try to make it up to her. I also really liked to see the change between Ari and her dad. She’s forgiving. My favorite part was how Ari finally felt as if she finally really mattered when her dad and Aries, but I won’t spoil that part.

First of all, I love that she is 5"1' because that's my exact height. I almost never see that in books so it was super amazing to see a girl my size be the lead that Ari is in this book. Usually with small girls they turn out being more dainty and breakable. Ari is strong but true to her emotions without coming across as overly emotional. It's also a testament to the fact that not all alcoholics are the same. I was iffy about the idea of reading a book that takes on such a deep concept but the book didn't take dark turns or have moments that were too heavy. It was a real interpretation of an alcoholic doing her best to find her HEA. I totally expected her to be annoying but I ended up wishing I could befriend her. Loved it