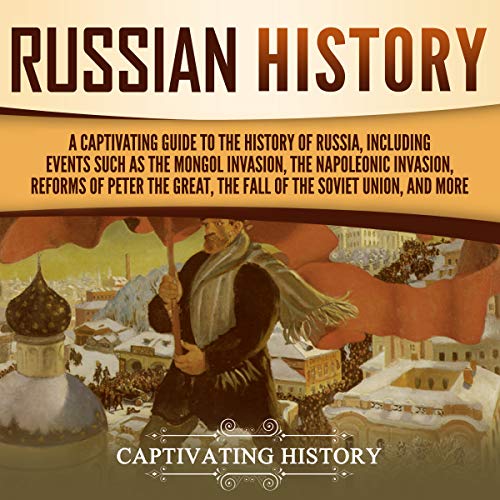 Discover the captivating history of Russia!

Russia, or the Russian Federation, as it is officially known, is the world’s largest country and covers almost a sixth of the global landmass. The country is often associated with harsh climates and autocratic government. The shadow of communism and the Cold War continues to influence global attitudes toward Russia.

This new Captivating History audiobook serves as an overview of Russian history over the span of more than a millennium, from the foundation of the Russian state by the Viking Prince Rurik in AD 862 until the collapse of the Soviet Union at the end of 1991.

In Russian History: A Captivating Guide to the History of Russia, Including Events Such as the Mongol Invasion, the Napoleonic Invasion, Reforms of Peter the Great, the Fall of the Soviet Union, and More, you will discover topics such as:

So, listen to this audiobook now if you want to discover more about the startling history of Russia!

What listeners say about Russian History

If you listen to it, you'll have a very basic understanding of Russia's history, culture, peoples, and ideas.

The title of the book best describes it: a very nice introduction to Russian history. The book is factual without the human drama and foibles that make history interesting,

Really easy to understand overview of Russian history. Will need a further reading of other texts to fully understand Russia and its peoples.

Easy to read and fulfilled by needs

Very useful overview of Russian history. In preparation for a trip to Russia, I learned to a lot for this very rich short overview, full of an interesting and relevant aspect of the main personalities and events in Russian history

a brief but complete history

it was easy to follow. just a brief history but does an overview of it's history to modern times. well read. it's my first history of Russia so I'm happy with the introduction

Wish it was more in-depth

While this was a good overview of Russian history, each segment was view brief with details few and far between. I easily got through this in a single afternoon which shows how much it rushed through the history of an entire country.

Very American centered description of post czarist Russia. Almost as if the State Department wrote it.

A Brief History To Start Off Your Learning

This was billed as a brief history and it certainly delivered on that. For a beginner to Russian History, as I am, this was a nice introductory book. It certainly leaves room for more in depth study with other books, which would be more focused on specific events or time periods. I do have to say I found the narration lacking. I read a previous review calling it “robotic” and I certainly have to second it. In addition, he mispronounced many words. And not in a tomato/to-mah-to kind of way, but really straightforward things. Like mispronouncing the country of Belarus. Or the word debacle. Many other examples abound and it was a bit distracting.

A quick, shallow overview of USSR/Russia

The story begins more than 2000 years ago and ends at near current times. Because the timeline is so long, by necessity it is a quick, shallow view, easily forgettable. I got up to Peter the Great and realized I couldn't remember any of the previous chapters. There is so much interesting information, though, I wanted to get a detailed history book of Russia and read more. For a more current perspective, go straight to chapter 17, The Cold War, and listen to the end of the book. The content of the book has opinions that must be accepted in light of nothing to refute it. My memory of Russia that I was aware of is very spotty.

A good, solid and easy to listen to instruction

This was a solid, simple history of Russia, from its proto Russian origens, through to the modern age. As with any wide sweeping history, it simplifies events, but does so in a manner that adds to the narrative without grossly misrepresenting the facts. the Narrator was easy to understand, but really should have examined a pronunciation guide before readijg some of the place and personal names.