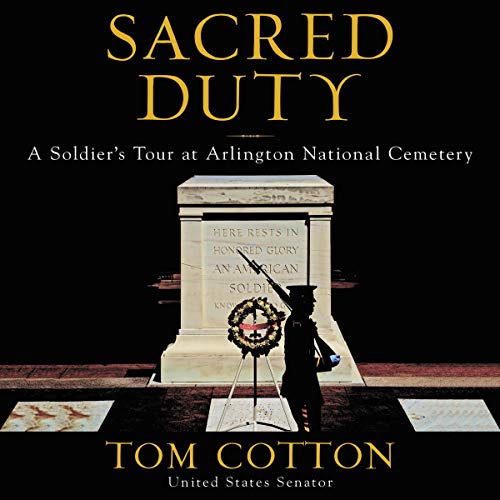 Their Duty Is Sacred. Their Standard Is Perfection.

An extraordinary journey behind the scenes of Arlington National Cemetery, Senator Tom Cotton’s Sacred Duty offers an intimate and inspiring portrait of “The Old Guard”, the revered US Army unit whose mission is to honor our country’s fallen heroes on the most hallowed ground in America.

Cotton was a platoon leader with the storied 3rd US Infantry Regiment - The Old Guard - between combat tours in Iraq and Afghanistan. At the height of the Iraq Surge, he carried the flag-draped remains of his fallen comrades off of airplanes at Dover Air Force Base, and he laid them to rest in Arlington’s famed Section 60, “the saddest acre in America.” He also performed hundreds of funerals for veterans of the Greatest Generation, as well as the Korean and Vietnam Wars.

The Old Guard has embodied the ideals of honor and sacrifice across our nation’s history. America’s oldest active-duty regiment, dating back to 1784, The Old Guard conducts daily military-honor funerals on the 624 rolling acres of Arlington, where generations of American heroes rest. Its soldiers hold themselves to the standard of perfection in sweltering heat, frigid cold, and driving rain. Every funeral is a no-fail, zero-defect mission, whether honoring a legendary general or a humble private.

In researching and writing the book, Cotton returned to Arlington and shadowed the regiment’s soldiers, from daily funerals to the state funeral of President George H. W. Bush to the Tomb of the Unknown Soldier, reliving the honor - and the challenges - of duty at the nation’s “most sacred shrine.”

Part history of The Old Guard, part memoir of Cotton’s time at Arlington, part intimate profile of the today’s soldiers, Sacred Duty is an unforgettable testament to the timeless power of service and sacrifice to our nation.

What listeners say about Sacred Duty

This book is a great way to learn more about the ceremonial history of the US and the US Army. Senator cotton does a great job.

This is a treasure I will keep in my library. Will read again. I highly recommend it

powerful and poignant. a must read!

A must read for any patriotic American left or right. An amazing documentary love letter to the Armys oldest and most visible unit. Read this and learn what they do for all Americans every day.

I was not sure exactly what this book covered but was intrigued enough to buy it. I'm glad I did. Thoroughly researched and informative. It made me proud to be an American and appreciate the dedication and sacrifice the men (and women) of the Old Guard do to honor the Unknowns of this country. Thank you Tom Cotton!

I'm a 23 year veteran of the Army and Air Force. I served with our squadron honor guard, which doesn't hold a candle to these soldiers, but it gave me a unique insight and appreciation for these professionals. I found the last two chapters to be very emotional which is probably not unusual among military veterans. I only know the author through media stories, so he is more than likely a greater man than they portray. I'm hopeful that with his help we can get our country back on track. I hope to meet him some day. Thanks to a great American!

A wonderful view of a cherished military tradition

I had visited Arlington many years ago and always thought the Guard a unique a important way of honoring our soldiers. Sacred Duty will give you the inside perspective and history of this great group and tradition.

An absolute must read for every American! This book truly honors those soldiers who Cary on the duty to honor soldiers.

I very much enjoyed this audible book. It was well written and I enjoyed Sen Cotton’s first hand knowledge of the subject. I have fond memories of visiting Arlington and have always been impressed by the professionalism of the soldiers and their dedication to their mission.

Informative primer on the value excellence!

Easy to listen to as I kept learning of The Old Guard for the first time while being fascinated by vignettes from the lives of people who make me proud to be an American.

I also now appreciate Tom Cotton in a very different way that causes me to to be deeply thankful for my fellow Americans who had the wisdom to elect him senator of my great country.