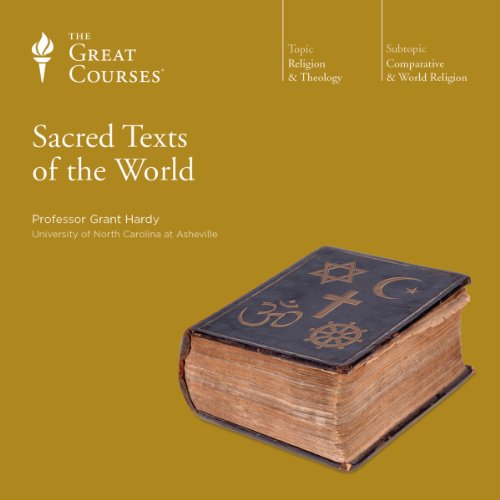 Sacred Texts of the World

Sacred Texts of the World

With few exceptions, the world's religions are anchored in their sacred texts-core writings that express the ideals and vision of the faiths, forming a basis for belief and action. Humanity's library of sacred writings is a huge canon that includes many of the most influential books ever written. In addition to the Hebrew and Christian bibles and the Quran of Islam, major sacred writings include the Hindu Vedas, the Buddhist Sutras, Daoism's Daodejing, and the Analects of Confucius, as well as the beloved texts of religions such as Zoroastrianism and Jainism, and modern faiths such as Baha'i.

These are texts that people live by and, at times, are willing to die for.

In these 36 lectures, Professor Hardy takes you deeply into the body of sacred writings that have played a fundamental role in human culture and history. Discussing a broad range of texts, the course examines the scriptures of seven major religions, as well as nine lesser known or smaller faiths, including texts from the ancient Egyptian and Mayan societies. In addition to studying the scriptures of the Judeo-Christian and Islamic worlds, you'll discover religious texts from vastly differing cultures around the world.

These richly insightful lectures highlight a global legacy of faith, thought, and spirituality.

An excellent introduction to various religions

This course is one of the best Great Courses lecture series I have come across. Prof. Grant Hardy has compiled and presents in this course a huge amount of information about various world religions through introducing their sacred scriptures. He presents it in such an enthusiastic and engaging manner that it is difficult to stop listening.

During these lectures he deals with all the major religions in the world and a few of the lesser known religions. He conveys a lot of empathy towards the different religious traditions without sacrificing his own faith tradition. (He actually kept me guessing about his background, until I listened to his lecture on the Book of Mormon and the Church of the Latter Day Saints' liturgy used in their temples as a spoken form of sacred text. An internet search confirmed my suspicion. That said, his engaging, objective and open-minded approach to different religions ensured that no clear bias towards any specific faith tradition could be detected.)

It is very interesting and insightful. For me his lectures the Hebrew Bible, Zoroastrianism and Buddhism were the most interesting. The idea that the Hebrew Bible is a text in conversation with itself is a brilliant observation. I found his discussion of the influence Zoroastrianism on Judaism and Christianity thought provoking. He helped me also to get a much better grasp on Buddhism. There is however much that I didn't know about other faith traditions like Baha'i and Islam and the relationship between them.

I would have chosen different abandoned scriptures (like the Ugaritic clay tablets or some Mesopotamian works, instead of the Egyptian Book of the Dead etc). However I realise that you cannot include everyone's likes and dislikes.

If you want to get to know something about the most important faiths in the world and what they received as holy texts, this is the course to enlighten you. It is very well researched and presented. A must-have course!

I very much enjoyed this book and will listen to it over again. The speaker is very easy to listen to and the content is amazing no matter your tradition. Great insights to other religions and the presentation is very good. Many questions are answered for the listener and I liked that he referred to other texts that may be of interest to the listener. I just wish there was a way to download the course content to make it easier to take notes.

After my last positive experience with a Great Courses audiobook, I picked up several more when they were on sale. The first of those that I have listened to is Sacred Texts of the World by Grant Hardy.

Many of the other world's religion's sacred texts are not primarily about meaning or narrative but the sound or tradition or other purposes. And some of those sacred texts are more about government regulations, or stories or rules than revelation about God. One example is that early interaction with many eastern texts attempted to find eastern equivalents to the creation story and often those just do not exist.

Hardy attempts to present the texts as the followers of those texts would understand them. He is occasionally critical of how the followers read or use their sacred texts, but mostly he gives a presentation that seems positive.

The length of presentations of each is roughly equivalent to size of following. So smaller religions get less time. But in an 18 hour course, there is still time to cover a lot of texts. The final lecture is in an interesting conclusion. He looks at the US Constitution, Declaration of Independence, Gettysburg Address and I Have a Dream speech as if they were sacred texts to help the listener understand the basic ideas of what sacred texts can mean.

This definitely was dry at points. I set it aside a couple times to listen to other audiobooks before coming back. But overall Sacred Texts of the World was helpful.

This is a great introduction to the study of world religions. It's very well organized and the author/narrator portrays--strangely enough--a great love for every sacred text he discusses.

What other book might you compare Sacred Texts of the World to and why?

The Old Testament, from the Great Lectures Series.

Have you listened to any of Professor Grant Hardy, Ph.D., Yale University’s other performances before? How does this one compare?

I loved his lecture on the Book of Mormon.

I thought 32 hours will get me a better understanding of the whole religion but I am left wanting. I wanted to understand more about the religious aspect of the texts, but I got a small portion of them in some historical and social context. Perhaps my expectations were too much and it would probably take all 32 hours just for one. That being said, the next time I want to learn more I have some context.

Another great series from The Great Courses

I found this series of lectures to be enlightening and informative, and Professor Hardy is a very competent narrator and communicator.
The religious texts discussed in this series are treated with the utmost of respect—and, although I suspect the professor could take cheap shots at any of them—perhaps by focusing on some more unusual or arcane aspects—there is a strictly professional approach to them all. In the end, one can only say that the treatment of all the texts is reverential, if somewhat detached.
Not to say that Professor Hardy doesn't love these works—he absolutely does. I suppose it would be a high compliment to say that these lectures helped to dismantle my own prejudices, yet this is not quite true. At the end of the day, the sheer diversity of the texts—and the belief systems they embody, it seems to me—cannot be a recommendation for any one of them

really interesting content but it is a textbook, if your not paying close attention you will get lost

Hardy’s knowledge of the texts and the history and traditions surrounding them is impressive, but what makes this course so enjoyable is Hardy’s infectious enthusiasm for the subject. He is the kind of teacher that effortlessly inspires his students because he is so sincere. In every lecture, he shares his favorite quotes or stories from a particular text, or how it affected him in some way. In one poignant anecdote, he relates how an essay on the book of Ruth convinced him and his wife to adopt a baby. In all my years in academia, I have never heard a professor share something so moving and personal. In the audio, you can hear him choking up as he talks about it.

Hardy has the greatest respect for the texts and the religions they belong to. As a scholar, he examines them critically, but unlike many modern academics, he does not ruthlessly deconstruct, demythologize, or discredit them; nor does he attempt to disabuse those who believe in them. Sadly, that is a rarity these days. He reminds me of my medieval studies professor from grad school, and I wish there were more professors like them. After taking this course, I not only want to read or reread all of the texts he lectured on (a library worth of books – LOL), but to read his books and listen to his other Great Courses series. And I will be listening to this again – it’s too rich to take in all at once.

Each lecture is a good balance of general and specific information so that they seem comprehensive without being overwhelming. By the end, you feel you can talk intelligently about the texts covered, even though you’ve only learned a little about them. For those who are interested in learning more, Grant provides ample recommendations for reading and research.

Without a doubt one of the best introductory college courses I’ve ever taken. I would love to attend it in person.

This series is one of the most engaging of the Great Courses that I have listened to to date. And that's no mean feat - GC are good quality but I feel this one surpasses previous courses.

The lectures cover great ground in short time, so kudos to GC for finding a comprehensive series of lectures that get to the point, and include the most important details.

By far the most outstanding element is Professor Hardy's delivery and obvious deep passion and expertise. He reports at the end just how many sacred texts he actually read in entirety and frankly I am not surprised.

I will likely listen to this again - something I have done only once with the many GC's I have downloaded.

Would you consider the audio edition of Sacred Texts of the World to be better than the print version?

Yes, it is better than reading texts since it could be heard, even while going on with my daily chores and even while driving. When my eyes get tired because of reading for a long time, watching continuously at my laptop screen i prefer to listen, giving rest to the eyes.

What does Professor Grant Hardy, Ph.D., Yale University bring to the story that you wouldn’t experience if you just read the book?

One sitting. No! i have realized my ears also get tired if listed too long.

I look forward for some more works of Prof. Hardy.