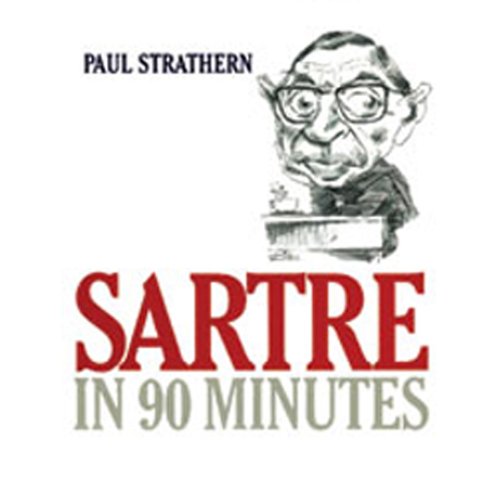 During his lifetime, Jean-Paul Sartre enjoyed unprecedented popularity for a philosopher, due partly to his role as a spokesman for existentialism at the opportune moment, when this set of ideas filled the spiritual gap left amidst the ruins of World War II. Existentialism was a philosophy of action and showed the ultimate freedom of the individual. In Sartre's hands, it became a revolt against European bourgeois values.

In Sartre in 90 Minutes, Paul Strathern offers a concise, expert account of Sartre's life and ideas and explains their influence on man's struggle to understand his existence in the world. This audiobook also includes selections from Sartre's work, a brief list of suggested readings for those who wish to delve deeper, and chronologies that place Sartre within his own age and in the broader scheme of philosophy.

"Witty, illuminating, and blessedly concise." ( Wall Street Journal)
"Mr. Strathern's books are well-written, clear and informed; they have a breezy wit about them." ( New York Times)
"Each of these little books is witty and dramatic and creates a sense of time, place, and character....I cannot think of a better way to introduce oneself and one's friends to Western civilization." ( Boston Globe)

If you could sum up Sartre in 90 Minutes in three words, what would they be?
aka Cliff Notes

Would you recommend Sartre in 90 Minutes to your friends? Why or why not?
Yes - I've listened to each book in the series about a major philosopher that is available on Audible. Strathern's books don't have the analytical depth found in Will Durant's "The Story of Philosophy" books, but he does a good job summarizing each philosopher's biography, major philosophical points, and criticisms. Additionally, Strathern's breadth is broader than Durant's in that he covers a greater number of philosophers. I believe that the time spent listening to these books has been well-spent.

My reviews for each book in the series about a philosopher are identical.

What about Robert Whitfield’s performance did you like?
Voice is clear, well-modulated, and easily understood, even at 1 1/2 speed.

easy to keep up with. interesting bits about his life and philosophy. will buy others like this.

Good biography but lacks depth on his work

It has a lot of biographical information on Sartre's life but is lacking in depth on his philosophy and main ideas of his work. Read if you want to learn about the person but if you want to know his existentialist views better to just read his short work "Existentialism is a Humanism".