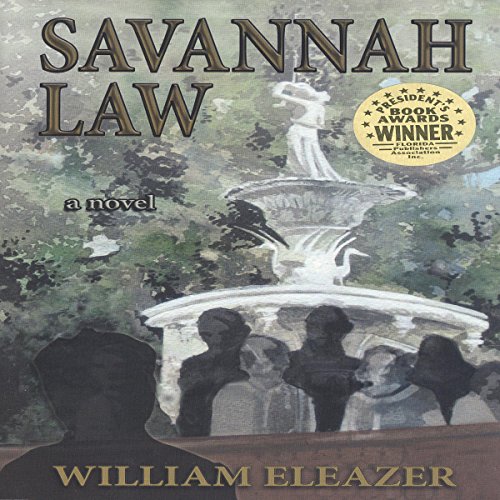 Written by: William Eleazer
Narrated by: Bob Johnson
Try for $0.00

Savannah Law, a novel. A young law professor's obsession with a female student and a politically charged, media-frenzy criminal trial that pits the nation's most successful criminal trial lawyer against Savannah prosecutors, provide the backdrop for Savannah Law. The intense drama - both inside and outside the courtroom - builds to an unexpected climax in an unforgettable final chapter. Savannah Law is filled with colorful but believable characters, including a few cantankerous law professors, who demonstrate their vanity and eccentricities at the weekly faculty meetings. The novel will appeal to anyone who enjoys a legal thriller or Southern novel.

What listeners say about Savannah Law

The setting of the book is Savannah Collage of Law. Jennifer Stone is a first-year law student. A young professor becomes obsessed with her. There is a big trial going on and a student, Scott Marino, is on the case helping the prosecutor. Most students are observing. This adds more excitement to the story.

The book is well written and the pace is fast. The story grabbed my attention from the beginning and held it thought-out. The characters are interesting. There are several story lines interwoven to create an interesting plot. This is a fun legal drama story.

The book is twelve and a half hours. Bob Johnson does a good job narrating the book. Johnson is an actor and voice-over artist. He has a smooth sounding voice that is easy to listen to.

Good overall book. Felt very slow in the beginning. By the time the real plot twists came it felt rushed as compared to the 30 chapters of character building.

I received a free copy of this audiobook from the author / narrator / publisher in exchange for an unbiased review.

Courtroom drama as story subject can be very powerful. There are multiple awesome movies in that &quot;genre&quot;. And thus I'm a fan. But this book let me down. It's sooo.... darn... slow. Almost absolutely nothing interesting happens for chapters after chapters. I guess the author wanted to spend time on building characters. But sadly so much time was spent on it that it got super boring. I lost all interest in the characters and didn't get to the supposedly great courtroom scenes.

The narration was really bad too. The narrator didn't make any effort whatsoever to sound different for different characters. Everyone sounds the same, making it impossible to keep track of who said what.

Most possibly the first time I'm rating any book 1 star in all 3 criteria.

If you like mysteries and legal thrillers - this is the perfect book for you. I really enjoyed this story and it kept me interested all the way through. I love when a story is unpredictable and can take me by surprise and this book definitely did that. Narration was fantastic!

I received a review copy of this audiobook at my request and I have voluntarily left this review.

Savannah Law was a lengthy book but completely worth the listen! The main plot isn't revealed until fairly late in the story, with many moving parts to set it up. The drama unfolded in a way that I didn't see coming. Along the way, I was fascinated with the trial antics and the interesting and sometimes creepy characters. My interest was held throughout, leading up to the thrilling conclusion. I've listened to several audiobooks narrated by Bob Johnson and am a fan of his narrative style. I loved his character voices and could generally distinguish them with ease. I really enjoyed Savannah Law and would recommend it.

I was given this free review copy audiobook at my request and have voluntarily left this review. This review is my honest opinion.

This Story Is Very Detail Oriented Which Can Be Somewhat Boring Especially Pertaining To Law...However There Were Some Likable Characters And Some Action..Especially Starting At Chapter 45...Overall A Decent Story...

I was voluntarily provided this free review copy audiobook by the author, narrator, or publisher.”

Although the suspense builds dramatically towards the end of this book, most of the story is character development. The characters are interesting and
believable for the most part. The obligatory romance is not too sappy and develops more realistically over time without the angst present in so many romance
novels.

There is some exciting courtroom drama and a twist at the end that didn't surprise me as much as it was obviously intended to do. It felt a little contrived,
but it kept me listening, and overall, I was not disappointed with the story.

I wasn't particularly fond of Bob Johnson's style of narration. Nothing I can definitively describe. He distinguished character voices adequately, but
his overall presentation just didn't work for me very well. It wasn't bad and I didn't have any trouble listening to the audiobook.

This is the first book in a series and I look forward to hearing and reviewing the next book in this series.

NOTE: I was given this free review copy audiobook at my request and have voluntarily left this review.

I enjoyed the overall story, but found it difficult to identify the plot for much of the book. There were also a lot of inconsequential characters' introduced making the story line hard to follow.

Savannah Law is a fast paced book. I enjoyed listening to this book while the drama unfolded. The characters and scenes where most events took place are portrayed well. The storyline wraps around college life and politics as well as criminal court proceedings. The sub plots weave interesting twists to the main story. The characters were believable, however one of the main characters, Jennifer, seemed to have little common sense at times. An enjoyable listen with an insight to Law college life and courtroom drama.

More than I expected!

I enjoy legal thrillers that have more than one thing going on. This book has some very unexpected twists, a love story, a trial, and a threat. I thought the characters were well developed and enjoyed many of them. I have listened to other books by both this author and narrator and thought this book was much better than other people have. I enjoy southern legal stories and will continue to listen to more of them by this talented team. Due to the length of this book, I was not able to continuously listen and absorb the story. I requested this review copy audiobook and have voluntarily written this review.