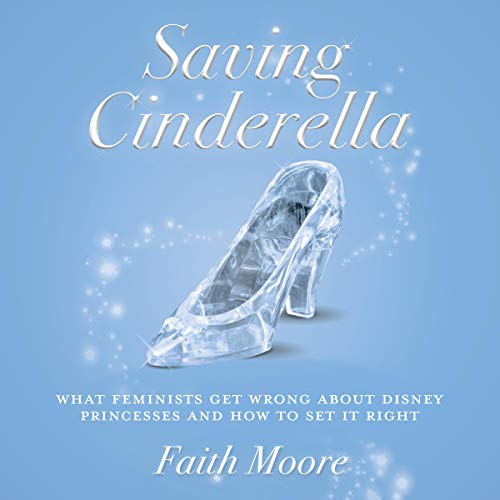 Saving Cinderella: What Feminists Get Wrong About Disney Princesses and How to Set It Right

It’s time to save Cinderella! Ready for a radical statement? Disney princesses aren’t anti-feminist. Until the 1990s, Disney princesses were role models for little girls, teaching them how to grow up into strong, centered, moral women. But then something terrible happened. A vocal minority of viewers and film critics (let’s call them “princess critics”) got hold of the narrative. They called Disney princesses “drips”, said they were “boring”, and boiled their dreams down to “husband hunting”. And Disney listened, churning out princesses who were virtue-signaling, man-hating puppets shouting the ideas of the princess critics. But the princess critics were wrong.

Each chapter in this book covers one of the eleven “official” Disney princesses (plus Elsa and Anna from Frozen, who aren’t yet “official”). In chronological order, the book will explore the themes, tropes, and symbolism of these movies, and the ways in which the princess critics have influenced our perceptions of them. And then it will prove the princess critics wrong.

What listeners say about Saving Cinderella: What Feminists Get Wrong About Disney Princesses and How to Set It Right

My two favorite princesses are Cinderella and Belle. Cinderella was my favorite as a little girl; and Belle as a teenager. They both are equal to me now!
I have never really cared for Merida and Anna/Elsa because something felt off...your book puts that “off” feeling into words. Because of the feeling, I never actually saw Moana.
Thank you for a wonderful read!

This book is a must read for its demographic.

Articulate, charming, and nail on the head for a subject matter that keys on to 30 something year old women. Listening to this with my 3 young daughters offered our family a chance to engage in something interesting to all of us, work on our vocabulary and think critically about metaphors in art.

Excellent Critique on Feminism in the Realm of Princesses

I really appreciated this in-depth explanation on what makes the traditional princesses valuable. As someone who wanted to be Peter Pan or Simba more than a princess, it was an interesting look into the things that I missed as a child.

I have a new appreciation of Snow White and Cinderella, and now I understand why Jasmine, Pocahontas and Merida always annoyed me. I was really glad Merida never went very far. They were preachy and bossy and I really can’t stand that. Sometimes even Belle is a little much for me.

I didn’t fully agree with her fully negative analysis of Mulan or Elsa in Frozen, but I still found them valuable and important points to recognize, even if I’d have a few counters. I somewhat wish I could fix Frozen, especially.

This book outlined a little piece of what took me 30 years to accomplish: realizing my inner identity with my outer one. This in and of itself is a Christian theme in my opinion. I became a Christian at 8, but only recently did I start to understand how to manifest my identity in Christ - the arch prince charming - on the outside. It is something still developing, and books like this shine a light on what is happening.

A position she did not address, I believe Prince Charming often represents a Christ figure as well, and he sees us (Snow White, Cinderella, Rapunzel, Aurora) as beautiful, worthy, and wants to take us away from our rags, abuse and the dangers of the woods and bring us into the heaven we were meant for. The beauty of the princesses represents our own worth as the pinnacle of creation. We cannot be rescued until we are purified, realized, and in love with him.

The narration is fine, nothing horrendous or fantastic. She’s casual, much like listening to someone’s vlog. Unfortunately the quality of the recording is not good, but I was able to get used to it.

I was never a huge fan of princess movies. I even thought Mulan was good when I was a kid, but this book made me rethink those misguided casual assessments.

Faith Moore digs deep and explains the meaning and delightful symbolism of fairy tale princess movies. What a story is supposed to do and who it is for makes a big difference how you should interpret it. Spoilers: princessses aren't examples of vapid husband hunters with no agency unless you take literally everything literally (no joke!). Understanding the ways princess stories communicate and what they are supposed to teach is the key to unlocking their wonderful secrets.

Moore does a great job narrating her own book! Great reading voice, inflection, and just the right amount of friendly chattiness. Audio quality is a little tinny, but not prohibitively bad. Once I got onto the book I hardly noticed.

Overall, this is a great answer to the post-modernist, third wave feminist idea that women must be like men, value the same things as men, and even act like men to be strong or free. Women are different from men. They experience life differently and therefore their stories, symbols, and transformations should be shown and treated differently. Read or listen to this great book and hopefully you'll see just how beautiful that is.

I loved this book! I always loved Ariel and Cinderella growing up and when Frozen came out it never sat right with me but I could never put my finger on why. The author’s arguments are so clear and her knowledge of princess stories and symbolism is extensive. I also really appreciate the defense of Snow White as a character with agency - as well as a great synopsis of The Frog Prince, which I haven’t seen but now plan to. Great book!