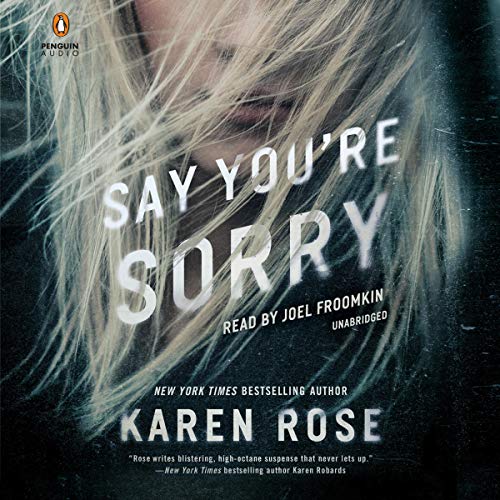 Written by: Karen Rose
Narrated by: Joel Froomkin
Try for $0.00

A serial killer terrorizing the women of Sacramento meets his match in this pulse-pounding novel from New York Times best-selling author Karen Rose.

There is a serial killer on the loose preying on vulnerable women. The only identifiable mark the killer leaves are letters - sometimes one, sometimes two - all carved into the torsos of his victims. Together, they spell “Sydney”.

When he grabs Daisy Dawson, he believes he has found his next victim. But despite her small stature, she fights back with an expertise that quickly frees her. Before fleeing the scene, Daisy also manages to grab what proves to be crucial evidence: a necklace from around the killer’s neck.

The necklace is more than a trivial item - it is a link to a cold case Special Agent Gideon Reynolds has been tracking for 17 years. With Daisy’s help, Gideon finally has the opportunity to get closer to the truth than ever before.

But they might not get the chance, as the serial killer has a new target: Gideon and Daisy.

“Fans of Lisa Gardner and J.D. Robb will enjoy this outing and be on pins and needles waiting for the next installments.” (Publishers Weekly)

"Complex, thrilling, and impossible to put down... An engrossing and exciting start to a new series, and one that busts genre stereotypes along the way." (BookPage Top Pick)

"Chilling and remarkably complex, this is a thriller that, for all its length, will keep minds sharp and nightlights burning. An excellent series start." (Library Journal)

"Rose’s Say You’re Sorry delivers on the promise of a pedal-to-the-metal thriller with plenty of developed characters and converging mysteries...to call this book a page turner is an understatement." (USA Today)

What listeners say about Say You're Sorry

I loved this book, so much. The story keeps you enthralled the entire time, it's a hell of a ride, and makes you want to keep listening. I also love strong female leads, and Daisy absolutely fits that role. She is my favorite female lead out of the dozen karen rose books that I've read, not saying that I haven't loved them all, but she just had something... different. She is so self dependant and can take care of herself. One more thing... WHY DOES EVERYONE HATE THE NARRATOR?! He did a fantastic job. He is the only male narrator I've ever heard that can do female voices. SO STOP HATING AND ENJOY!!

I have not read a book like this in years. Each page I listen to makes me want to go on to the next then the next. Just went you thought they apprehended the criminal, bam another twist occurs and another and another. An amazing read, very sad on the note it ended on.

Okay so I’m a lezzy, but sheesh these characters make my eyes roll... a lot. Be warned the only thing described in detail are their sex scenes... but skipped through those, gag. I saw great reviews, serial killer, strong woman lead and thought “sweet” let’s try it. I ended up listening to the whole thing cause there were bits where I thought it would get better but then it would slip back into more of a romance novel. The serial killer... so I do study history of real serial killers and this one does break the mold, but in a way that makes him very comfortable to read, he’s nice to dogs and babies. For a serial killer book where he’s going off killing dozens of women? It’s just weird. I returned, but if you’re looking for a romance of what is a strong female who totally saves her guy’s ass a few times, with a little murder and strange theme of adults who were abused as children, narrated horribly (narrator did voices but so weird for each character found it terribly distracting) than this is totally for you. Author did have some creative bits, and maybe a different narration would be less cringe but I’d still be wishing there was more thrilling investigation than “love making” and flirting. Plus they start hard and fast with it, and while I don’t know straight relationships... they reminded me more of “uhauls”, lesbians or I guess any couple that move in on the second date way too quick, & that alone made my eyes roll.

This new series by Karen Rose is absolutely fantastic! There is a slight connection to her Baltimore series. I like that this book has all new and fresh characters. For anyone who has never read anything by Karen Rose this is a great place to start. Although the book is 24 hours she completely fills the time with a totally worthwhile listen. The characters are fleshed out to the point that they are so familiar to you they could be your next door neighbor! There are no lulls or fillers to take up time.
The publisher's summary gives gives a very scant synopsis of about the first 15 minutes of this book. To make this brief I will not spell out the entire story. There are so many layers I wouldn't know where to begin. This book is an extravaganza in the mystery/thriller/suspense genre. It touches on religious cults, torture, pedophilia, a completely warped serial killer holding an unfortunate victim that I found myself rooting for and maybe 15 minutes of romance. I personally don't go for romance as a preferred genre and generally fast forward through these scenes.
This is a fast paced story with lots of action and even more suspense!
Joel Froomkin does a great job narrating.
Very HIGHLY RECOMMENDED!
If you found this review helpful please indicate so.
Thank You.

I listen to 3 or 4 books a week and this is the worst narration ever. The story might be good? I'll never know.
Started Chapter 3 and it is being returned!

I did find the narration a little grating at points with all the voices but that might be personal taste. I did think that the romance aspects of the story were over the top and unnecessary. No grown people would act like that especially when going through all they went through it became a little much. Other than that the actually crime part of the story was really good I just didn’t care for the fifty shade moments.

This is another Karen Rose hit. The story is outstanding. The Narrator is AWFUL!!!! Come on, you can get a better narratore that this. He does not do the story any favors.

All the people sounded awful, like old men.. even the women.. Which made it super hard to listen to. Other than that it was a good book.

Yet another amazing book from Karen Rose. I am in love with her writing style. No leaf unturned. So much detail. New narrator for me but Joel was great! Can’t wait for the next one ❤️

For some reason the voice reading this really threw me off. I could not follow the story at all because of it.

This narrator is terrible. He ruins the book.

I listen to a lot of audiobooks, and I have suffered through quite a few bad narrators for the sake of a good story, but this narrator is impossible to listen to. I don’t understand how this was approved for sale. His accents are distracting and bad, he is weirdly over dramatic, and pauses in odd places. I cannot imagine a scenario where someone listened to this and thought “good job, let’s publish this” I was really looking forward to reading this book, and I am so disappointed. I am going to try one more time to see if the story can hook me enough to ignore this terrible performance, but I feel like this will be a return. Please, please find a new narrator for the next book in the series.

loved it, great plot but took some time getting into a man reading it. awesome!