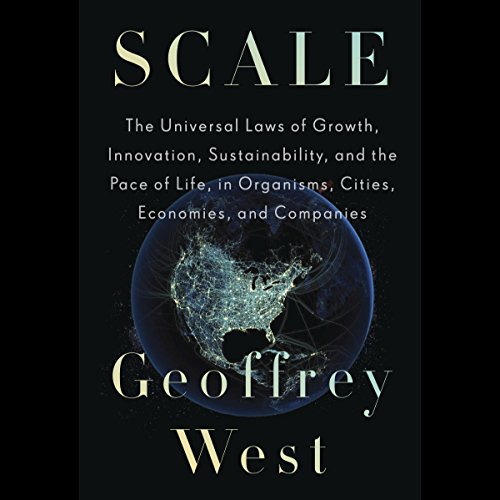 Written by: Geoffrey West
Narrated by: Bruce Mann
Try for $0.00

From one of the most influential scientists of our time, a dazzling exploration of the hidden laws that govern the life cycle of everything from plants and animals to the cities we live in.

Visionary physicist Geoffrey West is a pioneer in the field of complexity science, the science of emergent systems and networks. The term complexity can be misleading, however, because what makes West's discoveries so beautiful is that he has found an underlying simplicity that unites the seemingly complex and diverse phenomena of living systems, including our bodies, our cities, and our businesses.

Fascinated by aging and mortality, West applied the rigor of a physicist to the biological question of why we live as long as we do and no longer. The result was astonishing and changed science: West found that despite the riotous diversity in mammals, they are all, to a large degree, scaled versions of each other. If you know the size of a mammal, you can use scaling laws to learn everything, including how much food it eats per day, what its heart rate is, how long it will take to mature, its life span, and so on. Furthermore, the efficiency of the mammal's circulatory systems scales up precisely based on weight: If you compare a mouse, a human, and an elephant on a logarithmic graph, you find with every doubling of average weight, a species gets 25 percent more efficient - and lives 2 percent longer. Fundamentally, he has proven, the issue has to do with the fractal geometry of the networks that supply energy and remove waste from the organism's body.

West's work has been game changing for biologists, but then he made the even bolder move of exploring his work's applicability. Cities, too, are constellations of networks, and laws of scalability relate with eerie precision to them. Recently West has applied his revolutionary work to the business world. This investigation has led to powerful insights into why some companies thrive while others fail. The implications of these discoveries are far reaching and are just beginning to be explored.

Scale is a thrilling scientific adventure story about the elemental natural laws that bind us together in simple but profound ways. Through the brilliant mind of Geoffrey West, we can envision how cities, companies, and biological life alike are dancing to the same simple, powerful tune.

"An enchanting intellectual odyssey…also a satisfying personal and professional memoir of a distinguished scientist whose life’s work came to be preoccupied with finding ways to break down traditional boundaries between disciplines to solve the long-term global challenges of sustainability.... Mr. West manages to deliver a lot of theory and history accessibly and entertainingly.... Provocative and fascinating.” (The New York Times)

“Scale, a grand synthesis of topics [Geoffrey West] has studied for several decades, makes an important and eloquent case for the significance [of universal laws of size and growth] in an ecology of the natural and human world - and in understanding whether the two can fit together.” (Nature)

“West’s insightful analysis and astute observations patiently build an intellectual framework that is ultimately highly rewarding, offering a new perspective on the many scales with which nature and society challenge us.... A fascinating journey.” (Science Magazine)

What listeners say about Scale

Roughly 10% of the book is profoundly insightful, rest is just overly verbose explanation of simple phenomena or re-iteration of some social science finding. Not to mention digressions into personal life and academic career of the author. I would give this book five stars if he could cut it into one thirds of it's current size. No book can be about everything. If necessary reference to well known studies or a few hundred years old combinatorial math formula should go into references section, not the original script.

Tedious, never gets to the point

This is a long, tedious book that never gets to the point. The author is constantly branching off on &quot;interesting&quot; side comments, losing the thread of the book and exhausting my patience. It's too bad, since it seems the author might have something to say on the subject of scaling if he could actually get around to it.

Fascinating and clear enough for a lib arts major

This is an amazing book with a broad perspective on the statistical foundations of how things are born, grow, and die. Beyond just the life of plants and animals it expands its thinking into the life cycles of economies, corporations, and cities (the last of these apparently being the only immortal entity on the list).

Geoffrey West is a theoretical physicist and former president of the Santa Fe Institute in New Mexico. Ten or fifteen years ago he began to wonder whether the mathematics of his discipline could be applied to other sciences. He found a major gap in the study of biology where there was a great deal of information gathering and identification but few attempts to answer questions out of the information gathered using statistics. West wanted to see if there could be insights into some of the fundamental questions of biology. Why do things die? Why can animals only reach certain sizes, and beyond that how did whales become so big?

In biology he found startling comparisons, that the arterial systems of animals compare in design and scale to plants and trees. He found that arterial systems branch out uniformly to the point that blood stops surging but flows through capillary branches. He found the math almost identical to the way limbs and channels branched off in trees until reaching the constant flow in leaves. He learned that animals have nearly identical systems, from the smallest shrew to the whale, and that once you know, say, the size of kidneys in one you can calculate the same in other animals. More importantly, perhaps, he notes that the increased size of animals creates efficiencies so that an animal that is double the size of another needs far less than double the caloric energy.

This efficiency of scale transfers using the same mathematical constants to non-living entities. West found that cities grow at the same uniform scales, so that knowing the population of a city will allow you to make calculations on statistics such as the number of attorneys, the number of restaurants, the number of residential units, etc., with only small variations on some items that will define the unique personality of a city.

West also found comparisons of scale for corporations, with great similarities among all sizes, and identified a life cycle of birth, growth, and death lasting around half a century for those that survived the first five years.

Because the math used in all the different areas is consistent it's easy to grasp (even for this liberal arts major) and it's fascinating to watch these ideas redevelop in areas that seem so widely divergent.

West is a personable writer and includes information about how these discoveries were worked out with researchers in the different fields and even occasional talk about his children, such as calculating quantities of medications for his infant son.

There are also enlightening discussions on logarithmic scales and visualizations to help understand what exponential means and the alarming things it could mean for population growth.

The book moves from topic to topic with just enough time spent on each so the reader feels neither cheated nor overwhelmed in each, with every section building on the last. It's an excellent book for anyone interested in health, public policy, economics, or management.

Warning: do not use while driving long distances

Is this book simply a metaphor for its contents? Like Hermann Hesse, we are not intended to listen to the words (of which there are so, so many), but be left with a mind-changing perception from the whole. This book is about scale, size, and growth. To demonstrate the fact, the book uses an exponentially larger number of words, increasing by the power of 0.85 as the story progresses, than could possibly be needed to convey the simple message. It repeats the same argument with modest changes to the words (or maybe using longer and longer words, I'm not sure, because I fell asleep and drove of the road). Mice, LA, elephants, Oklahoma City, Microsoft, please let it end. And admittedly, I did not get to the end, at which point I would hope that the exponential growth would have ended in a Big Bang and a whispered, minimalist haiku. Would have given 1 and 3/4 stars, but it was not possible. Oh, its non-linear, by the way.

This fascinating book provides a new and challenging perspective on liked, death, biology, society all away up to cosmic scale. the author leaves a ton of questions to be answered, but that is just another proof that this is a truly thought-provoking book.

There are some excellent examples and explanations in the book but I really tired about halfway through. One problem is that this audio book would be enhanced by some graphics, particularly of the different log functions he describes. In addition, the really long section on cities is off the mark and gets in the way of a compelling narrative. Finally, this often seems like an advertisement for the Santa Fe institute and I find his plaudits for all his colleagues annoying and again takes away from the message.

Not for a scientific reader

If you have, somewhat, scientific background, in economics, social sciences or even biology and physical sciences, this book is not for you. The underlying concepts are quite simple, and the book is intended for an audience who totally lacks any background on the subject. Beware. I think it makes a point. However, the narrative of scaling across complex systems is intermeshed, although they have different underlying reasons. This is the part I liked least about it. Observational equivalence has not much to do with causational equivalence. Complexity is a very important subject and I am not sure this book gives to the subject the treatment it deserves.

Wow. A must read for the intellectually curious

This is one of the most satisfying books I've ever read. A mind blowing explanation into the order of the universe. Geoffrey you changed my life, please continue to raise the level of intelligence in the world.

That was a tough slog.

Fascinating topics throughout, but hugely ironic that a book about things being the right size was at least 2x longer than it should have been.

This is not a book for a general audience. Based on the author's vocabulary and sentence structure, I would estimate that he is writing for somewhere between a post-graduate and a Ph.D. audience.

So...unless you really like people reading math equations to you...I'd say skip the book and watch the author's TED talk and/or listen to a podcast interview.

In less than the first five minutes there are numerous and glaring assumptions, mistakes and opinions offered as facts such that this title needs to be recategorized as fiction.

This book allows for further research to be done. I look forward to this journey!