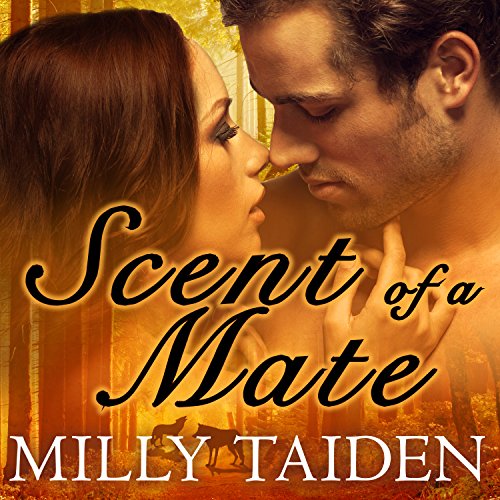 Scent of a Mate

Jordan Alvarez knew that a promise to her best friend involved staking out the local wolf pack's scenting ceremony and recording the graphic details. No one would know that four human women had sneaked proof of their rituals - or that was the plan until Aric Wolfe showed up.

Aric knew his baby sister was up to something, and he expected her best friend, Jordan, to be in on the chaos. Jordan's scent called to both the man and the animal, and he was done fighting the call of the beast. It was time to mark his mate.

When a good intention creates a problem for the Wolfe family, Jordan finds herself being stalked by a woman intent on claiming Aric as her own. Battle lines will be drawn, and two alpha hearts seeking control will either find the balance or risk losing their love forever. (Contains mature themes.)

"This book had crotch sniffing, tree climbing, mystery and great romance. There is some set up for future installments with secondary characters." ( I Heart Books)

What listeners say about Scent of a Mate

This was a great story. I like Milly Taiden. Yes they are short so it's all packed in. But does not take away anything, 5stars all around if audible would get the rest of the stories on audible. Performance and story are great overall will get 5 when all audible has all of Milly Taiden stores in Audible form. Thank you.

This was so much fun.

I was lucky enough to meet Milly Taiden at Romancing the Capital, and I got to hear her speak a bit on writing multicultural romance. She had wonderful things to say, was funny as heck, and so I nabbed this audiobook and went in ready to be entertained. She didn't disappoint.

First off - with an audiobook, there's always the possibility that a narrator doesn't perform quite up to snuff. This wasn't the case at all, and the reader did a solid job with character voices and had a strong range that suited the various emotional pivot points of the story. Action had tension, romance had heart, and the sex was spicy. It was well performed.

From a narrative point of view, this book has the double-duty of introducing a series (and quite a bit of world-building for the paranormal shifter mythology that's Taiden is constructing) and having its own story and the balance is handled really well. I liked Jordan - the feisty, curvy, Latina heroine - and her group of friends are obviously going to be the heroines of the rest of the stories. The friends were very much background characters, which is fine from a set-up point of view, and her front-and-centre BFF (and shifter friend) had more of a direct role and served as a great way to introduce the shifter dynamics to Jordan (and by proxy, the reader).

Aric was freaking hot. Scorchingly possessive and animal-like; this is a werewolf well-matched to Jordan's strong personality. I liked their give-and-take, and I liked that they both met somewhere in the middle without either feeling like they gave up too much for the other. It was very deftly handled. Also, the sex they had would melt metal. Yowza.

Their struggles to get together had a nice mix of inside-vs-outside issues, and as I said, this book pulled double-duty to set up a lot of the world-building, and much of that included the outside conflicts that intruded on Aric and Jordan. I'm definitely intrigued to watch the other friends get their time in the spotlight, and I think any fan of paranormal romance will enjoy 'Scent of a Mate' for sure. Even better that the heroine is a curvy lady with strength of personality.

Since this was a paranormal book and it included the rough-and-tough wolves, there is definitely some murder and mayhem involved, too. Keep that in mind if you prefer your romance to be more about the sexy than the bloody. It doesn't distract from the romance angles of the story, but I know some readers really don't enjoy any squick-factor. It never felt over-the-top or out of place to me, and I'm not a big fan of violence, so I don't think you should worry much, either.

All in all? Two paws up!

There has to be more books

I simply adore this audiobook/book. The story line is simple but, it`s a stand alone novella. Loved the narrator too
Cant wait.for more audiobooks.

Only so so, wish there were more good shifter stories 😢

This is a pretty one dimensional book. The characters have no depth, it doesn’t get the listener emotionally involved it centers around explicit sex scenes. Don’t get me wrong, I love hot sex, in my romances, like any other gal. However, I prefer a more complete shifter series like The Phoenix and Mercury Packs, by S. Wright, or The Immortals of New Orleans, by Kim Grosso.

I also have to mention a detail that I cant believe was missed by this author’s readers or editors.
There is a scene in which a human character shoots a rogue shifter with a shotgun and it leaves a bullet hole in the shifter’s chest. I must also point out that this was not a close up shot, it was from quite a distance. Now, I realize that I grew up in rural Kansas and started hunting at about 10 but, I would think it is commonly known that shotguns don’t shoot “bullets”. They shoot buck shot that shoots a spray of pellets that scatters in diameter fairly close to the barrel; making a shotgun pretty useless from any distance. The victim wouldn’t have a bullet hole but a spray of pellets. My eyes almost got stuck in my head, they rolled so far.

Be that as it may, I had been listening to a pretty intense series and wanted to take a break by listening to something light and simple. This book definitely fit that bill and it was in the Romance package and didn’t cost me a credit so, there you go, this story did serve that specific purpose.
-V from Kansas

great start to a series

I loved how all the characters were introduced and all connected. worth the time, worth the credit spent.

great story, but the narator sounds like a nasaly, whiny teenager. I ended up turning it off and read the book, because I had to know how it ended. Unfortunately, the narator is used for all of Milly's audio books. :0/

The Word Retarded is Not Funny or Appropriate

I have loved this author in the past. The story was cute and light. I was enjoying this book and just relaxing. I use books as a way to relax from my otherwise stressful life. I am a full time working mom with two children that have disabilities and are homeschooled. I have a wonderful son that is intellectually disabled (formerly known as mental retardation). I can not stress how offensive it is when a person jokingly calls a person retarded as was done by the main character in this book. It is not funny. My other son who is 14 year is of normal to above average intellect said "Why in the world would someone joke about a neurological disorder that severely effects a persons life?" I raise my boys that if something can hurt someone else's feelings than don't use the word. Shame on the author, the editor and the publisher. If the word wouldhave helped develop the character it would have been understandable, but this was unnecessary.

The narrator was perfect. Story has the perfect amount of raunch in it. The story lines are perfect.

Good story, but it could have been narrated by someone more suited to the story. The narrator used made the character sound like an old woman, smh.