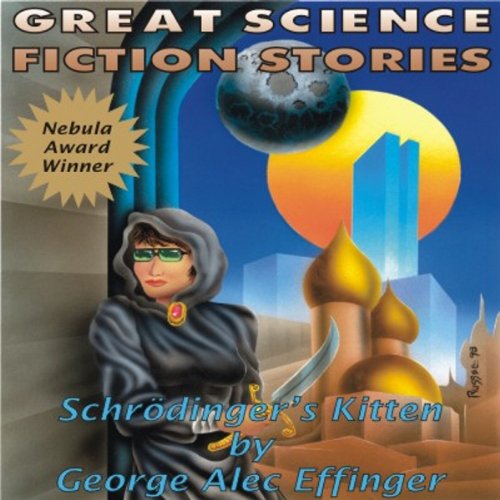 At first glance, George Alec Effinger's "Schrodinger's Kitten" would seem an odd choice for an audio production. True, this is of the exceedingly rare breed of short stories to win both the Hugo (1989) and Nebula (1988) awards, and Effinger is a writer who's accumulated his share of well-deserved critical acclaim over the years. But Effinger, as a writer, is a stylist. It's his skill with the written word, that elusive knack for putting not just the right two words together on the page, but the exactly right two words that has always been his signature. Whether it's the brooding, Arabic cyberpunk future of When Gravity Fails, the absurdist failure of "Who Dat?" or the outrageous farce of the Maureen Birnbaum tales, it's the deft wordplay that sets these works apart rather than cutting-edge ideas or intricate plotting.

"Schrodinger's Kitten," certainly, shares the trademark wordplay of Effinger's other work: starting with the insufferably coy title. Right away the listener is plunged into a non-linear narrative, which eventually is revealed to be very linear: at least from the perspective of the viewpoint character, Jehan. It's immediately apparent that 12-year-old Jehan is the kitten of the title, a frightened girl tormented by unsettling visions in the Islamic slum of Budayeen. It is here, during the festival marking the end of Ramadan, that she must kill a boy she has never met. A boy that her visions show her may one day do her great harm.

"This complex narrative structure not only translates well to audio, it translates very well." (sfsite.com)

What listeners say about Schrodinger's Kitten

This is a fine short story stretched into a novelette with a modestly interesting structure and story, but the characters are weak. The narration is good but does not add much. For the SciFi genre this is a good novelette, but I did not find it engaging. I think it would have been better as a shorter story, but it was still worth the listen.

Jehan is a pretty 12-year-old Islamic girl who sees visions of her own possible futures. These visions suggest that she will be raped in an alley, disowned by her fundamentalist Muslim father, and forced to live as a whore until she dies. Or she could kill her potential rapist first, but if she does that she will be executed, unless somebody saves her by paying the blood price??? There are too many ???ifs??? and too many potential paths and, as a child, Jehan is haunted by all the possibilities and her knowledge that something bad will happen, but not knowing exactly which of those branches her life will take.

Interspersed with these disturbing visions, we see Jehan in a possible future as an assistant and then a colleague to the men who are, during World War II, trying to unravel the secrets of quantum physics. Their findings will enlighten the world, but may also give the Nazis the knowledge they need to design horrific weapons. Does Jehan have the power to influence these sorts of future possible paths, too?

The title of George Alec Effinger???s story, Schr??dinger???s Kitten, refers to Erwin Schr??dinger???s famous paradoxical thought experiment now known as Schr??dinger???s Cat, which he used as an absurd argument to challenge the ideas of Einstein and his colleagues about the role of the observer in the dual state of subatomic particles. The title also refers to his assistant Jehan, whose strange visions of different possible personal futures represent the Many-Worlds Interpretation (MWI) of quantum mechanics, which Hugh Everett developed to explain Schr??dinger???s paradox. Jehan, a spiritual woman who is a faithful Muslim and personally experiences the understanding that her life has many potential branches which could all possibly be real, suggests that quantum physics is God???s game that he plays with humans.

Schr??dinger???s Kitten is one of those rare stories that have won both the Hugo and Nebula awards. It???s a well-constructed, mind-expanding story. I enjoyed the discussions of quantum mechanics and the way that Effinger, in such a short space, successfully married quantum mechanics, nuclear war, parallel universes, and spiritualism.

Infinivox???s audio production was read by Amy Bruce who did a nice job.

Interesting portrayal of our understanding of quantum physics
portrayed through the eyes of a Muslim girl.

This is a man who understands the history of physics, and the deep insight of Heisenberg. The text accurately reflects what was going on in the community thinking about these things. It is odd to reflect that while Heisenberg was coming to his insight as to the limits of human knowledge, people not so many miles away thought they had ultimate knowledge and certainty. You can see the results of their ignorance, their dogma, their superstition at Auschwitz-Birkenau. A story not to be missed, in spite of the poor Arabic pronunciation.

Has not aged well

If this book was published today, it would be derivative crap on a bad recording with weird music. The derivative/prescient elements are non perpendicular time lines as a means of looking at the most important event in an accomplished woman scientist’s life, a rape. I’m not into it enough to not bother looking up if the time line stuff was ahead of it’s time.

This story does a really good job of illustrating the concept of infinite possible realities and ties it to actual physical theory in a way that non-scientists can understand and enjoy. I was not bowled over by the narration which seemed tentative and even amateurish in parts, though well-delivered in other parts.