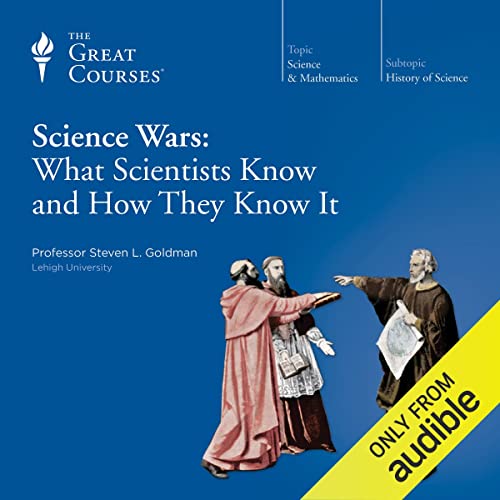 Science Wars: What Scientists Know and How They Know It

Choose one: (A) Science gives us objective knowledge of an independently existing reality, or (B) Scientific knowledge is always provisional and tells us nothing that is universal, necessary, or certain about the world.

Made your choice? Welcome to the science wars. This long-running battle over the status of scientific knowledge began in ancient Greece, raged furiously among scientists, social scientists, and humanists during the 1990s, and has reemerged in today's conflict between science and religion over issues like evolution.

This series of 24 lectures explores the history of competing conceptions of scientific knowledge and their implications for science and society, beginning with the onset of the Scientific Revolution in the 1600s up until today. It will provide you with an understanding of how science works that is as important as ever. Though it may seem that the accelerating pace of discoveries, inventions, and unexpected insights into nature over the centuries should secure foundations of scientific inquiry, that is far from true, as every day's headlines demonstrate.

By the end of these lectures, you will understand what science is, and you will be enlightened about a fascinating problem you might not even have known existed. "There have been a raft of popular books about what scientists know," says Professor Goldman, "but to the best of my knowledge, there is not a single one of these popular books that focuses centrally on the question of how scientists know what they know." These lectures are an answer to that critical need.

What listeners say about Science Wars: What Scientists Know and How They Know It

I can scratch this topic off my bucket list now. Well spoken, easy to follow, the history of science and this presentation has changed my paradigm irrevocably. Many thanks to Steven Goldman.

Emancipation from what you think you don't know

What made the experience of listening to Science Wars: What Scientists Know and How They Know It the most enjoyable?

It's literally a page turner. Each lecture leads into the next, touching on aspects of human history that one has learned about but never really analyzed in this context. Professor Goldman brings his arguments to life - well reasoned, crystal clear and intellectually challenging. For the most part objective too

The humanization of the historical and contemporary characters

Which character – as performed by Professor Steven L. Goldman – was your favorite?

Many... but the overall effect was one of growth. As in all the best courses, you come out the other end having learned more about yourself and your place in the world around you... This course provides it in spades

The hypotheses, philosophical arguments and scientific postulations are too numerous to mention. Suffice to say there's something in here for every level of neophyte and expert in the sciences... a real roller coaster ride through it's philosophical history

A course that could save the world

Steven L. Goldman takes you along on a journey through the seemingly obvious: the success of science to improve the world. Even though that is non-arguable the case, science almost lost it's trust among the general public, with incomprehensible possible consequences due not to the failings of science to generate results, but due to what philosophers of science was arguing about scientific knowledge.

This is a profound question. Is there objective, universal truth? And is that what science gives us? As Derrida and Foucalt came into fashion during the mid 20th century, more and more started questioning the earlier privileged position of scientific knowledge. Social construction theory was slowly undermining the trust in science. This was an important wake up call for the scientific community who had been too busy doing science not to bother engaging themselves in the "philosophical debate". In the 1980s it had become obvious that science was about to lose the war.

Goldman gives an intelligent analysis with key events and individuals explaining the reasons why the science wars came into existence, and how it can be resolved.

Science is not objective truth, but that does not diminish science. Science is still the greatest tool there is for dealing with ordinary experience, giving us control over our environments. Why that is the case, and how that can be argued is brilliantly explained in this course.

Understanding that, is the best way in which most of us can support science, the greatest invention there ever was.

What is Truth? Who defines it? Can scientists, as human beings, no matter how brilliant, ever achieve Objective Truth? What's 'Knowledge?' Is there a 'Reality?' Are there 'Facts'? Does it matter? Should it? Why listen to this??

In this course, the questions just keep coming - often, questions most of us never even think to ask. And visiting (or revisiting) those queries, it turns out, makes for time well spent!

My husband and I listened to this on a long summer car trip with lots of traffic jams and road construction delays. His background is in physics, mine is in the humanities - and we both really got a lot out of this set of lectures. They, in fact, went a long way toward making the trip bearable! There's more philosophy and history here than equations and theorems, and thus the course presents a very different angle for viewing the concerns of science and great scientists and philosophers through the ages. And there's much to prove that these questions are just as relevant and important today as ever before.

There are times when it gets pretty esoteric and can make the head spin - I certainly got lost occasionally - but these are issues well worth considering and very pertinent to our time. Professor Goldman assumes intelligence in his listeners and the ability to take in a lot during each lecture. So, the listener has got to work at it - and perhaps it will take more than one time through to get the most from the experience.

Everything is here - history, classic and modern philosophy, politics, science, religion, ethics . . . . If you have any curiosity about how these relate to science and to today's most vital issues, then I, for one, highly recommend you fight out these "Science Wars." It's a wild - and enlightening - ride!

Was a little over my level of understanding at points, but genuinely made me interested to better understand the material. Great course!

Fascinating from beginning to end

Where does Science Wars: What Scientists Know and How They Know It rank among all the audiobooks you’ve listened to so far?

Absolutely top-notch. One of the few that I've listened to all the way through.

The author's incredible knowledge and manner of delivery.

Impossible! You need to think and digest each lecture before going to the next.

I wish this were available in printed form too. I believe it would be a valuable reference book.

Great lectures but a little light on science.

I really enjoyed this course but would not classify it as a course on science. It's philosophy with a bites of science. As a chemistry teacher I have found it useful to better explain the nature of science and would recommend without reservation to all.

I loved this course. I'm a Christian and I found the history of Natural Philosophy extremely interesting. Professor Goldman is brilliant and presents a wealth of information in an extremely educational and fascinating way.

The presentation of the material, voice of the narrator, and fair coverage of views was both entertaining and informative. Great lecture series, I'll listen to it again and again.

This was an excellent and well delivered set of lectures examining the nature of scientific knowledge. The distinction between realist and empiricist views as well as various critiques of the standard realist view are treated fairly and without recourse to straw men arguments. I had a few nits to pick with some of the details, eg. ignoring what I understand to be the extent to which some of Kuhn's arguments were a reaction to what he considered problems with models of scientific process such as falsification. But those were minor issues for me and didn't detract much from I considered an excellent set of lectures.

This is one of the best lecture series I have heard on Great Courses.