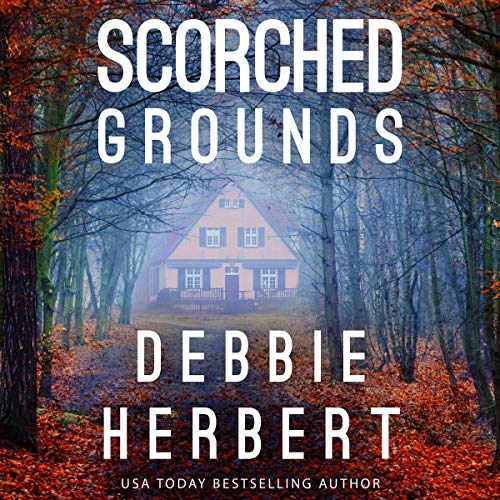 From bestselling author Debbie Herbert comes a chilling, fast-paced story about family tragedy and confronting what terrifies us most.

In the eighteen years since her father went to prison for killing her mother and brother, Della Stallings has battled a crippling phobia. Her fear only grows when her father’s released. She still believes he killed her family, but the police don’t have enough evidence to arrest him again.

When new grisly murders occur - each bearing the telltale signs that seem to implicate her father - Della begins to wonder if the real murderer is still out there. Could her father have been framed?

To find the truth, Della must face her greatest fears and doubts - not only to find justice for her family but to ensure her own survival.

What listeners say about Scorched Grounds

Much less enjoyable than previous Normal book but bearable. Heavy histrionics. Main character enjoyed her own victimhood too much and seemed to be always on the point of immediate mental breakdown. Too soap opera-ish to get more than 3 stars.

Loved it! This book kept me glued to my earphones!! Great character developement! Surprising twist and turns and a satisfying end! Fantastic narration done👌

In my younger years, I loved reading books by Victoria Holt, Phyllis Whitney and others who wrote in the Gothic romance genre. I am happy to have found a similar author in Debbie Herbert.

Della Stallings is traumatized at the age of 8 when her mother and younger brother, Jimmy, are brutally stabbed and the killer chases her through the woods. When her father is convicted of the heinous crime, Della goes to live with her Aunt Sylvie. Fast forward 20 years and Della's father, Hunter, is released from death row because of infractions committed by a former policeman.

Della has issues (who wouldn't!) and lives and works in solitude in order to avoid the stares of the people of Norman, Alabama. Under the care of a psychiatrist, Dr. Pennington, she tries to overcome her fear of the color red, also known as chromophobia. She soon finds herself becoming attracted to a policeman, Nathan Wilkes, who happens to be a classmate from high school.

The author does a great job in developing the story and the chapters are written from several of the characters POV. As the story unfolds, Della begins to wonder if her father was guilty of her mother's murder or maybe even worse crimes. Is her father the serial killer loose in Normal, killing women who are patients at the hospital where she works? Or, is there another monster causing these crimes?

At first, Della seems to be a cringing mental case, but toward the end of the book, she redeems herself in spectacular fashion in a fight for her life. All of the loose ends are finally woven together in a very satisfactory manner and I found myself racing to reach the conclusion.

The narrators did a great job and added a lot to my enjoyment of the story. I look forward to many more hours of entertainment by Ms. Herbert and hope that she continues to write books in this series.

that's 8 hours of my life I won't get back. Hope it was one my free ones

Guessed the killer early on and so quit once it was revealed. The main character is annoying, and while she’s an anxious person in the story, the narrator was way too overly dramatic. Every sentence was read like she was having a breakdown. It was too much.

ugh, what a waste - why make the victim pathetic? Seriously NOT worth your time!

I thought I figured out who the guilty party was, but I was mistaken.

18yrs ago, 8yo Della witnessed the gruesome death of her mother and younger brother and barely escaped from the killer. Her father was charged with the murders and sentenced to death row. Hunter Stallings is now a free man because all cases of a crooked cop had been overturned. Now Della is determined to prove that her father did, in fact, murder her family...but as bodies of female patients, from the mental health ward at the hospital, begin to surface, she begins to wonder if he’s been telling the truth all along. The real killer doesn’t want Della prying and may just use her phobia of the color red against her. Another great book with an ending that you would never guess.

If you LOVE great Murder mysteries THIS is the novel for you. Gripping suspense and early on you THINK you know who did it, just you wait. the TWIST is yet to come!!!

Straightforward crime fiction storyline with chick lit touches and telenovela melodrama. Characters are mostly not likable, including mentally fragile female protag unable to escape victim-mode 18 years after mom & brother were murdered. At first I felt sorry for the protag, but as the story progressed, I grew impatient at her lack of emotional growth. The culprit(s) were strobes in the hospital’s crepuscular paperwork mill during night shift.

The ending was telenovela-worthy. Dozens of packs of blood stolen from hospital blood bank. Red rooms. The fantastical gurney, which the protagonist was tied onto. The protag’s fantastical escape. Her antics on an unlocked gurney. Strange siblings, bad guy escaping, HEA reconciliations, unbelievable personality change(s), etc.

I abandoned the Audible book due to slowness and so-so narration, and instead, I speed-read my Kindle.