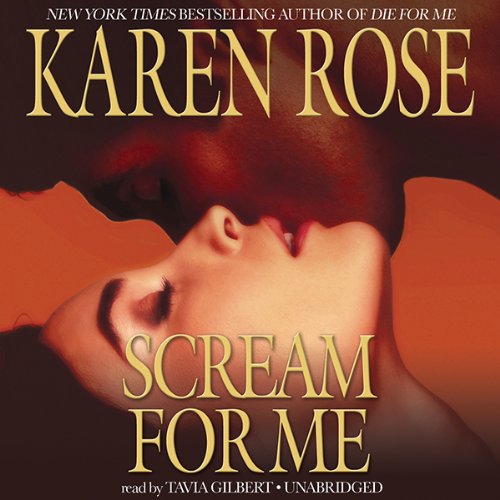 Written by: Karen Rose
Narrated by: Tavia Gilbert
Try for $0.00

Not long after his brother, Simon, was revealed to be a ruthless serial killer and met his demise, Special Agent Daniel Vartanian is drawn back into Simon's dark past. A series of recent killings are mimicking an unsolved murder from 13 years ago which is somehow linked to a collection of photographs that belonged to Simon.

With a handful of images as his only lead, Daniel is determined to bring the current murderer to justice and solve the mysterious crime from years ago. His search will lead him back through the dark past of his own family and into the realm of a mind more sinister than he could ever imagine. But his quest will also draw him to Alex Fallon, a beautiful nurse whose troubled past reflects his own - and who is now the object of a murderer's dark obsession. His race to discover the criminal's identity may also be his only chance to save the woman he loves.

What listeners say about Scream for Me

A little too choppy for me...

I liked the overall story, but I found the way it was constantly divided by dates and times a little too distracting for audio. Aside from that, the author did a good job with character development and storyline. It just might translate a little better in hard copy.

This book I tell you was AWESOME!!! This was, but will not be my last listen to Karen Rose. I could not stop. I went as far as to download it to my Ipod and my work computer. I highly recommend this book.

This is Book 7 of Karen Rose's Suspense series that I've had the pleasure of listening to. Her books always keep me on the edge of my seat and this book is no exception. There are so many twists and turns in the book, it will always keep you guessing. I highly recommend all of her books. I love the way they all tie into one another and the stories are all interesting. Even the back stories of all the characters, main and secondary.

Terrific romantic suspense story and top notch southern drawl narration. Although the story was reviewed as dark & edgy it isn't gory and blessedly lacks descriptive details of torture. The attraction between Special Agent Daniel Vartarian and Alex Fallon bypasses simmer and begins boiling on the first CD and doesn't let up until the end. This guy is so hero worthy it isn't funny. What I liked about Alex was her ability to let her temper/feelings show, instantly apologize when confronted with reason and logic, and then let it go. She didn't get all hotheaded and self righteous when Daniel was forced to do an end run around her. She recognized danger and in her own words, "Of course I'll stay put. I'm not stupid." This is were many authors error and deliberately create flimsy conflict.

I was depressed throughout.

Omniscient and lucky bad guys. No clues until the very end.

While reading this book I kept thinking of Michael Connelly’s Bosch books. Bosch does neat things and learns clues during the story. I am rooting for Bosch, I admire what he does, I enjoy the process. In this book no one does neat things or learns clues. It just drags until the end when all is uncovered. Lots of meanness and horrible acts. Karen Rose (KR) shows a killer who abducts, hurts and kills a woman. And it happens again, and again, and again. KR also shows other bad guys doing bad things, and then they do more bad things, and more bad things. By the end of the book I’ve sat through a dozen crimes and threats. KR makes the book long by adding crime scenes. It’s not until the very end that the identities of bad guys are known, mostly because there is a final shoot out.

I was frustrated because the witnesses and clues were partial and not revealing. Examples: A little girl saw an abduction but can’t talk due to PTSD. A bad guy wrote a letter to the heroine before he died explaining vaguely what was going on but in the letter he said “I won’t tell you the names of the bad guys, because it could put you in danger.” His sending her a key already put her in danger. Other victims could not name the bad guys because they were given drugs erasing their memories. So, no clues. It’s just a lot of wondering - who are the bad guys?

And then the bad guys are extremely lucky and omniscient. One bad guy was nearby in a vehicle (or something). Dan wants to talk with a teacher privately, so he and the teacher walk a distance away from other people so they can have a quiet conversation. But the killer hears their conversation. And now he’s he’s going to do something about what he heard. No matter what was happening, it seemed that there was always a bad guy nearby who saw or heard what the good guys were doing or saying and used that against them.

I want to root for the good guys, but they weren’t doing anything I could hope for or admire - just being blown around like helpless victims.

AUDIOBOOK NARRATOR:
Tavia Gilbert was good doing general narration, female voices, and Dan’s voice (the hero). But she was awful doing other men. They either sounded like teenage girls or just weird.

I love most her books but the way she portrays the main female character in most her stories makes me cringe a bit. But that being said, I still own almost all of the audiobooks she has, so it’s worth listening to.

I keep coming back for more!

I'm hooked on these books!!!! Not my favorite so far, but a great read. I'll keep reading the next one!