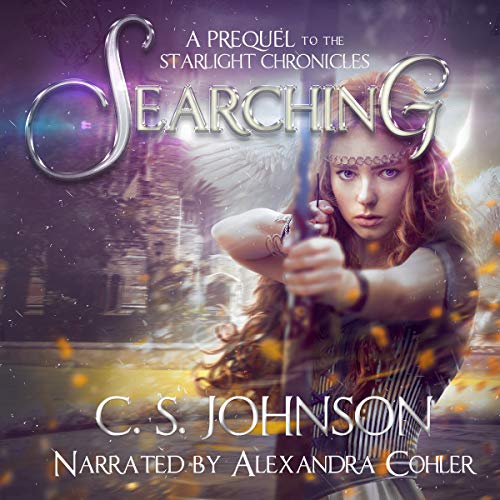 There is no surrendering your will without giving up your heart.

Long before she took up the title of Starry Knight, Raiya Cole knew she was different. Ever since she survived the car crash that killed her parents, the truth about her supernatural powers - and her destiny as a fallen Star - shaped her life, preparing her for a battle she knew would come one day. With the help of Grandpa Odd, her beloved mentor, Raiya works to maintain control over her power and train as a Starlight Warrior.

But the battle she prepared for is not the first one she must face.

As her seventh grade year begins, Raiya’s resolve is put to the test when her power unexpectedly - and exponentially - grows, threatening the fragile life she has managed to build over the last six years.  Can Raiya embrace a duty that demands not only her life, but her heart as well? Can she survive paying the price that comes with her power?

Searching is the prequel to The Starlight Chronicles, an epic fantasy adventure series for teens and young adults from C. S. Johnson.

What listeners say about Searching

Searching ? Aiming to ask that immortal question and answer with mortal words. A query of the centuries . What are we searching for ? Legends lost. Mysteries, unknown to the many. The few to whom the answers are given are those blessed both by time and Divine Providents. The Bible tells us they are those with a particular spirit of understanding. Anyone can learn but few will understand. Mysteries and secrets of the universe. To all who listen to the books I hope you come to a greater understanding. The writer has.

Great story. Loved it. Easy to follow with a great narrator. Listen. Look and Believe !!!!!

SEARCHING PREQUEL TO THE STARLIGHT

A WONDERFUL ADVENTURE, WITH A GOOD NARRATOR! ALEXANDRA COHLER,
YOU WILL FIND ANGELS STARS AND DEMONS IN THIS SERIES!

I liked how different it was

I liked how different it was, I haven’t read a book yet about angels and fallen stars. That being said I am not a huge fan of books based in high school. I always find it a bit weird that a hero who here to defend earth has to go to school. I know it all about blending in and everything, but I just have always found it a little odd. With that said, it was different.

Even though she was this super being in human form, she was not invincible. Her heart was broken, literally so whenever something really emotional and bad happened, she had to see a doctor. I know, I know your thinking how does she fight bad guys with a broken heart? Read the book you’ll see, it pretty cool.

(Disclaimer: I received a free copy from Author. Does not affect my review)

Searching is a prequel to the Starlight Chronicles series. There is an author note at the beginning that explains it might not be the best place to start if you haven't read that series first because there are spoilers at the end. I have read the series, and I agree that if you want to keep some of the tension and mystery of The Starlight Chronicles this should probably be read after you finish it. That being said, this *could* still work as a true prequel if you don't mind some spoilers.

This book stands alone in that it is not necessary to have knowledge of the world or characters before starting it. It has its own story arc - beginning, middle, and end - that doesn't rely on any of the other books. I do find it satisfying to have a contained story despite being a prequel to a series.

This is also a true YA novel. The main protaganist is 13 years old, but like many YA fantasy novels, she takes on challenges far more than any normal 13 year old could handle. Good thing she isn't quite normal... The character development is good, and relationships grow and change throughout the course of the book. Some fo the conversations seem a little stilted and not realistic, but there isn't too much dialog where that is noticeable.

I listened to this book in audio, and I'm not sure if this is a different narrator from the other books or if she just did a better job. Some of the things that were annoying to me in the other books were much, much better in this one. The voices are more distinct (and less "weird"), the pacing was good, and the inflection was on point.

Overall, this is a really solid, entertaining book that I would recommend.

I received a free copy of this audiobook at my request and have voluntarily left my honest review. The free copy did not influence my review in any way.