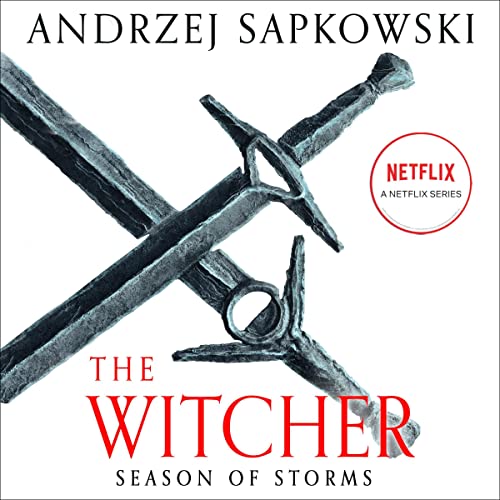 Before he was the guardian of Ciri, the child of destiny, Geralt of Rivia was a legendary swordsman. Join the Witcher as he undertakes a deadly mission in this standalone adventure set in the world that inspired the Netflix show and the hit video games.

Geralt of Rivia is a Witcher, one of the few capable of hunting the monsters that prey on humanity. A mutant who is tasked with killing unnatural beings. He uses magical signs, potions, and the pride of every Witcher - two swords, steel and silver.

But a contract has gone wrong, and Geralt finds himself without his signature weapons. Now he needs them back, because sorcerers are scheming, and across the world clouds are gathering.

The season of storms is coming....

"This is a series you can sink your teeth into." (BuzzFeed News)

"The universe of Sapkowski's The Witcher is one of the most detailed and best-explored in modern fantasy, offering endless opportunities for fresh ideas ... Complex character relationships enrich this already complex world; this is the sort of series fantasy fans will cherish." (B&N on Tower of Swallows)

"Delightful, intense, irreverent, and compelling....you have to read The Witcher books because they are rife with all of the elements that make you love fiction, and especially fantasy, in the first place....In a word, The Witcher delivers." (Hypable)


Geralt of Rivia is the protagonist of both The Witcher book series and the show. Geralt is a witcher, a monster hunter for hire, gradually enhanced through mutations that give him extraordinary magical abilities. His mother, a sorceress, entrusted his upbringing to a community of witchers. Geralt grew up at the legendary School of the Wolf at Kaer Morhen, where he underwent extensive training from a young age to become a witcher. This in-depth guide to Geralt of Rivia, the hero of The Witcher, will answer all your questions.

What listeners say about Season of Storms

This is exactly how audio books should be, I couldn't ask for more. My only complaint is that this is the last one.

Hands down the best narration on Audible

Peter Kenny is a true master at his craft. He is perfect for this already masterful series and adds so much subtlety to the already subtle nature of Sapkowski's text. 10/10

If your looking for a Geralt and only Geralt story then this is for you. Pure fan service.

In search of the White Wolf

#Audible1 Taking place long after the conclusion of the Lady in the Lake, this long-awaited book follows the story of a young woman following the legend of the white wolf in search of truth. A fascinating story of Geralt and company as seen through the eyes of a stranger looking back through time and distance.

A good listen and an interesting conclusion

A much better end to the series.

I’m very happy to have listened to this, the previous book left me feeling that things were ending just because they eventually had to; somehow rushing through things while at the same time, dragging it out. This volume felt closer in style to the first couple of books and left me feeling much more satisfied with how things ended although still left wondering.
Peter Kenny is too fast a performer but listening on .9 or .8 speed, he is wonderful. I highly recommend slowing things down if you have a hard time listening to his reading.

A Fun Return to Adventuring with Geralt

I went into this book hesitantly, I’d purchased it prior to reading The Lady of the Lake, which I found to be only okay, as a result it brought down my opinion of the series. I had heard Season of Storms was a series of short stories and since I really enjoyed the books of short stories I was hopeful. It is not a series of short stories, it’s more like a an overarching story of loosely connected events. Essentially Geralt’s swords are stolen early in the novel, and he gets drawn into several different conflicts while searching for them.

I was bored at the start of the novel, it felt too familiar. There was a sorceress throwing herself at Geralt, questions about who are really monsters, monsters or humans? and questions about who are really demons, demons or humans? Then there was the tension that Andrzej Sapkowski tried to generate by putting Geralt’s life in danger. Knowing that this story takes place prior to Blood of Elves there was obviously no real danger for Geralt. Things did get better by about the 1/3 mark.
The sense of adventure Sapkowski is good at creating returned and I began to enjoy the book.

It is a little confusing as to when this story takes place. At one point it appears to take place prior to the first story in The Last Wish book, but at another it appears to take place between The Last Wish and prior to The Sword of Destiny. Regardless, the epilogue gives away the ending of The Lady of the Lake, so this novel should be read after reading all the previous books in the series.

As always, Peter Kenny was fantastic. Without his voice acting skills I likely wouldn't have finished this novel.

If you’re a fan of The Witcher series I suspect you’ll really enjoy this book.

I really like this author as he keeps the story moving forward and always in directions to new mini story lines. Characters are interesting and the narrator is great - Peter Kenny.
I have been reading/listening to these novels out of order but still able so far to follow the storyline . I hope there will be more on Netflix’s
Keep the stories going Andrzel Sapkowski!!!

A continuation of a story with friends.

I enjoyed the journeys inside this book. The escapes are most welcome...waiting for more

the ending is most poignant

Certainly not his greatest crowning achievement in the Witcher series but a worthy final tale.

I would read this last. There arent any spoilers but the ending is sort of meant as a final goodbye to the reader. It's probably best suited to read after playing the games through as well, it's defintely a finale to our beloved Geralt

This series of events , after his latest apparent break with Yennefer , barely mention Ciri and this makes me happy . I can look forward to another or please more stories as we wait for the years to turn and Cirila and Yennefer once again emerge and demand my full attention .

Great entry into the witcher series

Great Book, and Peter Kenny has an amazing range of voices that he can put emotion into. For those of you a little confused, this book takes place(mostly) before the events of the other books, at least before Ciri is born.

This novel is another short story collection, thinly disguised as a single narrative. Each setpiece revolves around Geralt finding himself in a bad spot and failing out of it. Rinse and repeat. Each episode is engaging enough but it's nothing spectacular. I'd only ecommend to fans of the series who just want 12 more hours Witcher.

Another masterpiece from Sapkowski

Another masterpiece from Sapkowski and exquisite reading from Peter Kenny which gives every chance to slip away into the world Sapowski creates. For anyone looking for a near perfect series this is one part in it. The times I need an escape from the sickness I face in this life, I open this series and all fades away. I look forward to the next work that is translated for English.


Very happy the story isn't over. This is a must have in any true Witcher fans collection. I thoroughly enjoyed this book. Also. For those starting out on the Witcher books; I'd recommend starting with this one. As this is a prequel.

Although, those who have read all of Mr. Sapkowski's works, will have some laughs as well.

A good Witcher story but much messier

I quite enjoyed this book, especially with Peter Kenny's usual winning performance. However, the story structure is more reminiscent of the short stories, but are forcefully tied up and mixed together into a continuous novel. Because of this, the flow can feel scattered and the pacing all over the place. However, at the end of the day, it is still a very fun and interesting story in the Witcher universe. Just be prepared to really focus on whats happening when and where.

not the best book in the series

not sure why or how but this book is terrible compared to the rest. all over the place and doesn't really make sense to me. I think they're just milking the stores now. have about 3 hours left to listen and I truly have no desire to finish it. think I will be asking for a refund. I should mention I've listened to the other books 7 times so I'm definitely a fan, but this was disappointing.

weakest of the pre stories

I have enjoyed the two previous pre stories of the series. this one however was in my opinion the weakest and overall not entertaining. I often spaced out on this one.

Read as a prologue of sorts to the Stories in the Last Wish book 3 in the witcher series. (1st book you should read)

I absolutely loved the voice acting. I really felt apart of what I was read. All Amusing, Alarming, and Fun to listen to.

Peter Kenny once again delivered a great performance. However, the story seemed to drag on more than the previous books and compilations.

I wanted this to connect to all the previous books and bring some sort of conclusion, but it didn't. This is just another story of Geralt and Dandelion. I liked the story it just seemed disjointed.