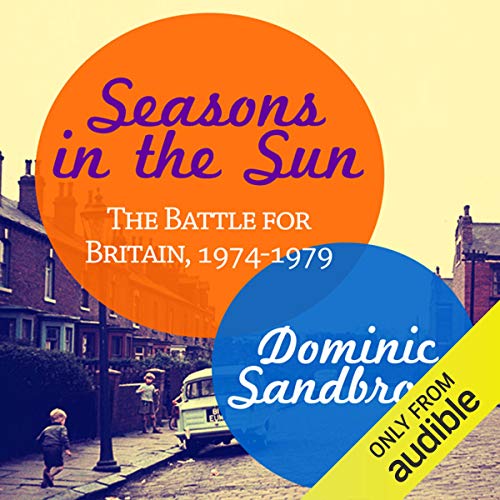 Seasons in the Sun

Written by: Dominic Sandbrook
Narrated by: David Thorpe
Try for $0.00

In the early 1970s, Britain seemed to be tottering on the brink of the abyss. Under Edward Heath, the optimism of the '60s had become a distant memory. Now the headlines were dominated by strikes and blackouts, unemployment and inflation. As the world looked on in horrified fascination, Britain seemed to be tearing itself apart. And yet, amid the gloom, glittered a creativity and cultural dynamism that would influence our lives long after the nightmarish '70s had been forgotten.

Dominic Sandbrook has recreated the gaudy, schizophrenic atmosphere of the early '70s: the world of Enoch Powell and Tony Benn, David Bowie and Brian Clough, Germaine Greer and Mary Whitehouse. An age when the unions were on the march and the socialist revolution seemed at hand, but also when feminism, permissiveness, pornography and environmentalism were transforming the lives of millions. It was an age of miners’ strikes, tower blocks, and IRA atrocities, but it also gave us celebrity footballers and high-street curry houses, organic foods and package holidays, gay rights and glam rock. For those who remember the days when you could buy a new colour television but power cuts stopped you from watching it, this book could hardly be more vivid. It is the perfect guide to a luridly colourful '70s landscape that shaped our present from the financial boardroom to the suburban bedroom.

In Seasons in the Sun, Dominic Sandbrook explores the bitter, turbulent world of Britain in the late 1970s, the years that brought punk to prominence and Margaret Thatcher to power. With inflation mounting, rubbish in the streets, bombs going off across London, and the economy in meltdown, the days of national greatness seemed a fading memory. Across the Western world, Britain was mocked as the "Sick Man of Europe", a byword for decline and self-destruction. In 1976 alone, race riots disrupted the Notting Hill Carnival, the retirement of Prime Minister Harold Wilson was overshadowed by allegations of corruption, the Sex Pistols made their shocking debut on national television, and Britain had to go cap in hand to the IMF.

Yet as Seasons in the Sun shows, there was more to late 1970s Britain than strikes and shortages. From rock music and television sitcoms to the novels of Martin Amis and the birth of the first home computers, this was a society caught between old and new: nostalgic for what had been lost, but already looking forward to a new and very different political and social order.

What listeners say about Seasons in the Sun

Yes. This and "State of Emergency", Sandbrook's other book about the early '70s in the UK.

Like "State of Emergency", Sandbrook continues to blow my mind about how desperate these times were for the Brits but how they always managed to persevere.

The story of Liberal Party head Jeremy Thorpe, involving a plot to murder a former lover. The would-be hit-man did manage to kill the lover's dog. Crazy story.

I was depressed when I finished it.

I wish Sandbrook's books on Britain in the Sixties were available on Audible. Can't wait for his books on the Eighties. This gave me great perspective on where the Thatcherite movement came from.

Ok so this is a fairly narrowly focused book, so unless you have an interest in British social and political history it may not appeal to you. That being said it's easily one of the best non fiction books I've ever read/ listened to. The pacing and detail level is perfect, and what should be a fairly dry subject is brought to life with a journalistic style reminiscent of Bill Bryson or Michael Lewis. As someone who was a small child in Britain during this period the book had incredible resonance with me. What was a real education for me was how close we came to economic and social collapse. I was much too young to understand at the time what the power outages and strikes meant but the books thorough explanation of the politcal climate at the time has given me a much deeper understanding of the forces that shaped the Britain i grew up in.

The best part for me was the clear explanation of the political intrigues of the time, from the bitter infighting and decline of a fractured, militant Labor Party to the passing of the old guard conservatives that allowed the seeds of Thatcherite monetrism to grow from the ashes of the IMF bailout and winter of discontent.

David Thorpe's performance is a tour de force, the narration on its own is clear, precise and a joy to listen to however what makes this book stand out from anything I've heard before is the voices of the celebrities and political figures of the time. The impressions are so accurate i was easily able to visualize the people being represented speaking the words as if i was a child watching them on the news in the late 70s and early 80s. Unless you know of, and have heard the people involved speaking you just can't appreciate how accurate his impressions are. If you listen to the book and don't know who some of the politicians are i would challenge you to find clips of them and compare. I hope there will be more in this series and that David Thorpe will read them. I couldn't imagine a better narrator for this book.

Excellent narration of an interesting book

If you could sum up Seasons in the Sun in three words, what would they be?

A good, quite listenable history of the UK from 1974-79. The narration is wonderful, enlivened by spot-on accents that enrich the story.

Very fine use of accents and impersonations of public figures adds life to the narrative.

Where does Seasons in the Sun rank among all the audiobooks you’ve listened to so far?

The best--I would have paid full price for it!

All of them--uh, except the killers. I mean I felt a degree of sympathy for nearly all of the political figures.

What does David Thorpe bring to the story that you wouldn’t experience if you just read the book?

Thorpe's impersonations! I've been listening almost nonstop. I hope he is recording another work of nonfiction by Sandbrook right now!