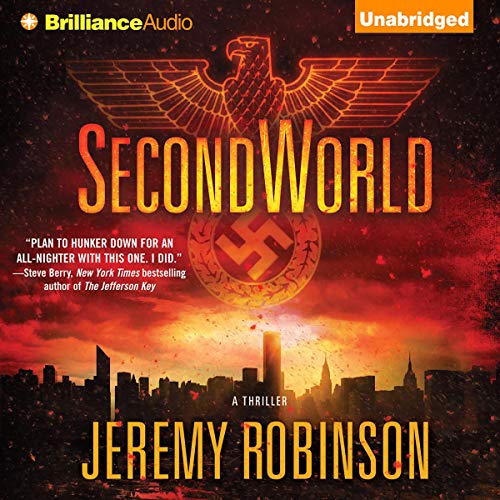 Lincoln Miller, an ex-Navy SEAL turned NCIS special agent, is sent to Aquarius, the world’s only sub-oceanic research facility, located off the Florida Keys, to investigate reports of ocean dumping. A week into his stay, strange red flakes descend from the surface. Scores of fish are dead and dying, poisoned by the debris that turns to powder in Miller’s fingers and tastes like blood.

Miller heads for the surface, ready to fight whoever is polluting on his watch. But he finds nothing. No ships. No polluters.

Instead, he finds a cloudless sky full of red particles dropping like snow and coating the ocean with a thick film that stretches to the horizon. When a dead blue whale collides with Aquarius, Miller begins a harrowing race to escape the affected area.

Cut off from the rest of the world and surrounded by death, Miller makes his way to Miami, where he discovers just one survivor and the awful truth: The strange phenomenon that robbed the air of its life-giving oxygen was an attack by an enemy reborn from the ashes of World War II. And they’re just getting started.

Miami, Tel Aviv, and Tokyo have all been destroyed. Millions are dead. And if Miller can’t track down and stop those responsible in seven days, the rest of the world is next.

What listeners say about SecondWorld

Cool story line..the science behind it is interesting. Of course some of it may seem a bit over the top but you would know that if you read the summary. I think my only complaint is..there seems to be a few to many 'only seconds to live' moments. I'm rather used to these (Clive Cussler fan) but it got to the point that I found myself thinking of something other than the story during these 'episodes'. You know the main character isn't going to be removed so it's simply the logistics of how he'll escape. It's numbing after awhile. That being said..it was an enjoyable listen.

I loved this book it was as good a book as the distance by the same author. I like books with new and interesting plots not the same old boring cookie cutter books and this one is perfect. The characters had me laughing out loud and really getting into this story.

I must say I loved the first 3 hours of this novel. I thought the threat of an oxygenless world was fresh and the whole earlier part of the story was tense, fast-paced and wickedly good.

I didn't, however, feel that the later half of the story held up so well. I really couldn't suspend my disbelief when it came to the 'nazi' ideology and how wide it had spread, or the fact that the POTUS decides to depend on four people to save the world.

From that point on, I still found it an enjoyable thriller, but I can't say I was genuinely engaged in the story anymore.

If you could sum up SecondWorld in three words, what would they be?

That would probably be the Czechoslovakian, "Cowboy". He was a very interesting character and he brought some humor to the story. He has balls too! That's always good. By the way, "Czechoslovakian" is a bitch to spell.

Again, that would be the accents. I listened to a few other books that "PG" has narrated and I always like his performance. I'm usually happy as long as the narrator puts feeling into the characters and doesn't make any of them sound lame. Maybe I need to get out more but I think "PG" is one of the better narrators on Audible.com

No, I didn't freak out or anything and I didn't really laugh either. I might have chuckled once or twice but that's about it. I didn't cry either. I don't think any book will make cry. I'm just too macho.

Yes, but I shouldn't.

Robinson is brilliant - and scary!

Dammit, his attention to detail makes you wonder just how far from reality could this be?

The short answer is that I loved it. It was intense and action filled and had reminded me of a game I’ve played before, Wolfenstein.
I’ve read it before in reviews but “Cowboy” was by far my favorite. Definitely a must read (or must listen if you had audible, like me haha)

nazis strike back. can we win this time?

Interesting, not what was expected

Slow start .. was not sure where the author was heading .. then is got real good .. then climaxed in a surprising end.

NO ONE WANTED TO GOLF DURING THE APOCALYPSE
I have to agree with the cutie from London, the first three hours were spectacular. An oxygenless world was a FRESH idea. In a world were you can not breathe, who cares about zombies, of which there are none in this. That is about the only thing not in this book.

LET'S CUT THE GRASS AND HIT THE GAS
This story takes place under the ocean, in the air, underground, on Air Force One, in fighter jets, on a aircraft carrier, in helicopters, in Poland, Antarctica, Florida and Washington D.C. You will meet Rocket scientists, tiger sharks, a whale, Four Horseman of the Apocalypse, a CONSPIRACY THEORY NUT JOB, a cowboy and NAZIS, CAN YOU BELIEVE IT. Yes, Nazis, my favorite bad guys. The story includes cryo-gentics and anti- gravity. Watch out for the Rumba Army, Foo Fighters and the Fork Bombs.

GENERALS NEVER GET THIER HANDS DIRTY
Is this believable, H E Double Toothpicks, no. The name of the book is SecondWorld and it is written by Jeremy Robinson, not Crichton. This is a fun novel. An escapist novel. A fun idea, which will never give you nightmares, cause it can't happen. That does not mean it is not creative and entertaining. Robinson entertains, period.

Gigante
Does a great job as usual.

I have already bought the sequel, Nazi Hunter.

A heading is required

Very poor story due to constant attempts to force me to agree with what is evil and what is good..(F-that, give me the story and I alone shall decide)

Many of the 'evil' characters did not feel fully committed to their paths... severely weakened the story considering how long-term their plan was! (cried? seriously? wth...blah!). Research all of the potential justifications these bad guys may have so you can also sell the other side; that is what draws people in because that reveals who the reader is in the context of the story. Then let the strongest previal (as the author sees fit of course), sit back and collect movie royalties forever.

I am actually a little upset, disappointed that it is so close to a truly great story! A cliffhanger to a second story - a last minute surprise excape for example - might have saved the overall situation of the story.

Just a nobody reader - so keep on truckin full speed ahead!