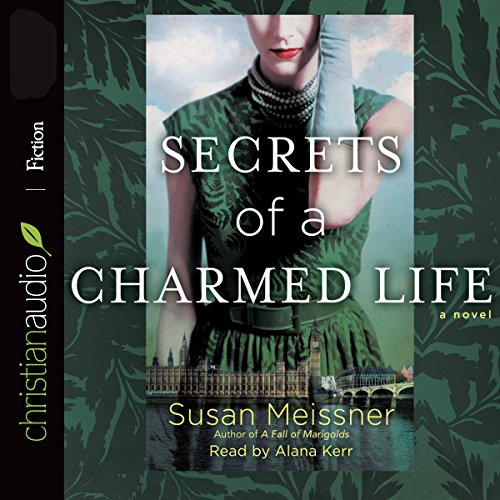 Secrets of a Charmed Life

The author of A Fall of Marigolds journeys from the present day to World War II England, as two sisters are separated by the chaos of wartime.

She stood at a crossroads, half-aware that her choice would send her down a path from which there could be no turning back. But instead of two choices, she saw only one—because it was all she really wanted to see

Current day, Oxford, England. Young American scholar Kendra Van Zant, eager to pursue her vision of a perfect life, interviews Isabel McFarland just when the elderly woman is ready to give up secrets about the war that she has kept for decades...beginning with who she really is. What Kendra receives from Isabel is both a gift and a burden--one that will test her convictions and her heart.

1940s, England. As Hitler wages an unprecedented war against London’s civilian population, hundreds of thousands of children are evacuated to foster homes in the rural countryside. But even as fifteen-year-old, Emmy Downtree and her much younger sister, Julia find refuge in a charming Cotswold cottage. Emmy’s burning ambition to return to the city and apprentice with a fashion designer pits her against Julia’s profound need for her sister’s presence. Acting at cross purposes just as the Luftwaffe rains down its terrible destruction, the sisters are cruelly separated, and their lives are transformed.

What listeners say about Secrets of a Charmed Life

Secrets of a Charmed life

This story was beautifully. Written. There are so many characters and each is is well developed. I found myself relating to the characters. I enjoyed it so much that I read it in two days.

This is the first Susan Meissner book I've read, and I'd like to read more. But I was confused as to why this story wasn't narrated by an English actor, since the vast majority of the action centres around English girls in England. The narrator's accent was all over the map! It was downright bizarre to hear young girls from Whitechapel portrayed as having the accents of upper class ladies (with a vaguely foreign flavour). She also read so slowly, with such extremely long pauses at commas, that I was going back and forth between 1x and 1.5x speed. So, so frustrating. I liked the novel, but this narrator... no.

If you likening Nicholas sparks you’ll love this. Otherwise don’t go near it. It’s got the hr factor. (Harlequin romance)

Rare 5-Star Across the Board!

If you could sum up Secrets of a Charmed Life in three words, what would they be?

The two sisters, Emmy and Julia - both superbly drawn.

Which character – as performed by Alana Kerr – was your favorite?

It's mainly a narrative spoken by Emmeline, and Alana's interpretation was lovely.

Who was the most memorable character of Secrets of a Charmed Life and why?

It was a story about two sisters, Julia and Emmeline, who were separated at the beginning of the Blitz on London. Both of these characters were equally memorable.

I truly enjoy historical novels -- stories set in the past-- but this was more than that. Ms. Meissner's tale of what innocent civilian's of London endured during Hitler's assault on the city and the surrounding area, was the most emotionally evocative telling of this bit of history that I have ever read. The intimate details, sometimes grotesque and sometimes touchingly beautiful, provided a perspective on this brief period that I had never considered. But most significant was her insight into the human experience, the weaknesses and strengths of the human mind and heart. Almost immediately, I felt like I knew Emmeline - her free spirit and rebellion against her mother's authority mixed believably with her love and protectiveness towards her little sister, Julia. The relationship of these two half-sisters is timeless. Every twist and turn of their young lives as they faced and triumphed over the horrors of loss and destruction all around, kept me longing to know where their choices would lead them next.

When reading for enjoyment, I tend to want everything to fall into place, not predictably, but neatly with a happily ever after tone. This is not what I found in Secrets of a Charmed Life. I found much more. An intriguingly complex tale with events as varied and unsettling as life itself. And, as is often the case in life, Ms. Meissner reminds us that troubled times do not preclude rich and precious rewards.

My favorite book of the year

I would recommend this book to anyone who enjoys historical fiction. It is a wonderful story about two sisters who become separated in the London Blitz (1940) at the start of WWII. Well written. It will bring tears to your eyes. Good from the beginning to the end.

This was a different twist to the WWII genre of books. The story of the children evacuated to the country the the devastation to the families as a result of the bombing of London was eye opening.

The characters were compelling and the story was beautifully woven with loss, despair, love and hope. The narration was superb! Well done!

If you could sum up Secrets of a Charmed Life in three words, what would they be?

What other book might you compare Secrets of a Charmed Life to and why?

The Secret Life of Bees because it is also historical fiction and documents a young girl's emotional journey in dealing with her perceived guilt over her mother's death and how she found a safe place in Miss August's home and family.

Which character – as performed by Alana Kerr – was your favorite?

Juliana. She was so different from Isabel and was a pleasant surprise later in the book.

If you could take any character from Secrets of a Charmed Life out to dinner, who would it be and why?

Isabel. Because she was two people in one. I think that her journey to make peace with her two identities and the impact this had on her loved ones was a message of hope and tolerance for the healing process that many cultures do not embrace. It is an individual journey as was clearly exemplified by both sisters. No one can do this for you.

I enjoy Alana Kerr's narration which is what led me to this book. Plus I learned something new about the war along with the author regarding the foster program for London's children. I think the author kept the backdrop simple while creating a complex web of emotions and people which is a fair balance. Some author's of historical fiction tend to overwhelm readers with what they know. I'm sure the temptation was there but overall, a good read.

Awesome. I cried at the end. Really great story full of remarkable characters. I will definitely look for more from this author.

Good, but could have been much better

If possible, I would give "Secrets of a Charmed Life" 3.5 stars. I enjoyed the first 2/3rds of the story much more than the last part, where the narrative is told through a series of letters. The plot lost a lot of its punch for me at that point. I would have liked more history and detail about the blitz, etc. Also, the similes were a little over-wrought and the writing often became overly-sentimental (especially toward the end). Negatives aside, I would still say it's worth a read/listen - just don't expect The Nightingale. As for the narrator, her voice and emotion were good. As others have noted, though, she had an annoying and confusing way of pausing at commas so long that they seemed full-stops, and then she'd add in the final clause of the sentence after a few long beats. That habit definitely detracted from the book and made we wonder where the sound editor was.

How difficult is it to find a narrator with an actual British accent?
This drove me crazy. Not only can you tell the accent isn't authentic, but the dialect is all wrong for English girls who grew up during that time period, with the education (or lack thereof) that these girls had in the story. They talk like they have Ph.D.'s in English. The way they speak is so American also, not British. That's on the author, not the narrator.
Lastly, people don't talk like that. There were these constant "life lessons" being told by the main characters that were overly dramatic, self important, and cliche'. This book was completely forgettable except for what annoyed me about it.

It's a fine story, and the reader is very good, but overall it's a shallow story. I'd hoped for richer symbolism and more complex character relationships.

I read this book for book club. It is so unlikely, not in story but in character, that I had to force myself to finish.

This story fell somewhere in between “alright” and “not bad”.

I looked forward to reading about what it was like in London during the blitz and learning more about the evacuation of children to the countryside but I didn’t feel the book delivered on those themes. They were mentioned, scenes took place in those settings, but the book wasn’t really ABOUT it. I don’t feel any more informed or enlightened on the topics than I was before starting this book.

I liked the start much more than the middle because at that point in a story you are still expecting the best. As the story went on and more and more layers were added to the plot, it lost its focus.

It got better toward the end - I don’t want to give away too much detail, but the “will they / won’t they” contrivance between the sisters did raise the suspense by a notch or two so it held my attention.

On a side note, I am getting increasingly tired of the flash-back set up. Why not just set the story back then and be done with it? Unless there is a hard connection between the two timelines, I am beginning to feel like it’s a cop out for telling a complete story from start to finish. If you are simply recounting events to someone, you can gloss over large portions of a story with a “and that went on for a few years” or “it wasn’t until 6 years later that…”

I need to find a novel that explores in more detail the themes I was hoping to delve into in this book, still overall it was a nice story.