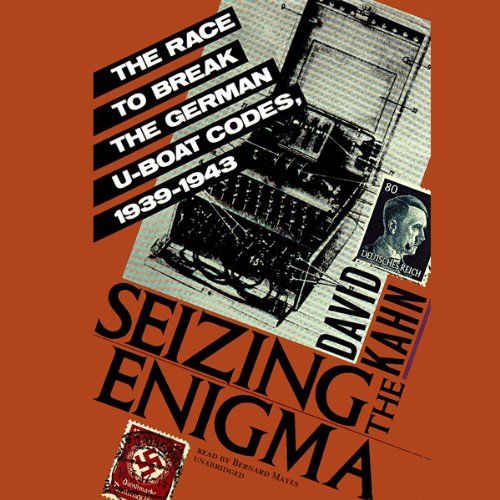 Written by: David Kahn
Narrated by: Bernard Mayes
Try for $0.00

For almost four desperate years, between 1939 and 1943, British and American navies fought a savage, losing battle against German submarine wolf packs. The Allies might never have turned the tide of that historic battle without an intelligence coup. The race to break the German U-boat codes is one of the last great untold stories of World War II.

David Kahn, the world’s leading historian of cryptology, brings to life this tense, behind-the-scenes drama for the first time. Seizing the Enigma provides the definitive account of how British and American code breakers fought a war of wits against Nazi naval communications and helped lead the Allies to victory in the crucial Battle of the Atlantic.

“The best historian of cryptography explains the cracking of the Naval Enigma cipher.... David Kahn writes with authority and enthusiasm.” (Simon Singh, author of The Code Book and Fermat's Last Theorem)
“[Kahn] underscores the strategic importance of submarine warfare in the Atlantic, giving a balanced account of the ultimate importance of code breaking in that arena. High drama at sea seizing German codebooks and equipment and analytical genius ashore were essential. Kahn describes both of these matching efforts expertly. Informed laypersons and specialists will find this book valuable and intriguing.” ( Library Journal)
“Kahn provides detailed, action-packed accounts (drawn from interviews with surviving eyewitnesses on both sides) of the bold seizures that yielded vital documents…A first-rate briefing on the use of brawn as well as brains to alleviate the U-boat threat.” ( Kirkus Reviews)

What listeners say about Seizing the Enigma

I found this fascinating because it personalized the story. I did take a break from reading to learn from other sources how it worked including online simulation. well worth five stars.

He makes you realize all the moving parts that goes into understanding any one facet of WW II. For example, he'll go into great detail about an allied convoy and what it means when some of the message traffic is intercepted and what it meant for the convoy. He made it such that you felt you were on the convoy and any moment a German U-boat could be threatening.

He really cleared up in my mind what it means when people say we broke the code. It's much more nuanced then I had always believed. The story of the Polish mathematicians and their approach kept me on the edge of my seat and is just one of the many, many different stories the author makes come alive.

One warning, this is one of the view books where I would get lost by the mathematics, but the flow of the story is still understandable and exciting, and I really have corrected some major misunderstanding I had about the cracking of the code and what it meant.

A tough coice for audio

This is a somewhat less-than-great presentation of a great story. It documents what is likely the most amazing feat of sustained intelligence analysis ever performed against a target that should, by all rights, have been unbreakable. The intellectual level achieved by people like Alan Turing, as well as the selfless efforts of hundreds of others at BP are nothing short of amazing in retrospect.

The presentation is factual, detailed (some might say dry), and often hard to follow due to the lack of photos, numerical tables, and other information that is not conveyed by the audio alone. For example, if you can visually picture an Enigma machine after having listened to the written descriptions only, I congratulate you. I cannot. But I will now go seek out the photos, and I will know what I am looking at.

The Enigma story is like something out of a thriller- the author recounts several daring exploits in the quest for Enigma, but they fall a little flat. I think part of the problem is the narrator; I have several other books narrated by him which I quite enjoyed but his lack on inflection in this recording is disappointing. I still enjoyed the book, but I wasn't able to just listen all the way through as is my habit.

This is the COMPLETE history of the Enigma Code Breakers.

I thought I knew this history but no I learned I did know even half of the story. Great read, deep research and a superb performance. It can get a bit wonky and detailed. I’m no math whiz and I stayed interested and engaged. Well Done!

Techno Thriller but it is a True Story

The story of how the enigma machine was conceived and developed after WW1 then perfected by the German Navy in WW2. Then how the Poles almost cracked it before moving to Britain where a massive secret program at Blechley Park and throughout the Navy ultimately destroyed the German submarine packs and won the war.
The best thing about this book is the way it describes how the machines were constructed and how the messages were decrypted. Ten times better than the movies I've see on the subject. I want to read more from David Kahn but only after I have built an enigma machine myself.

What made the experience of listening to Seizing the Enigma the most enjoyable?

The author develops the story chronologically while giving credit to the Poles for discovering the weaknesses in ENIGMA, to the British for exploiting them and to the Americans for building the really big machines that fully expoited it.

I would recommend this book to anyone interested in the history of encipherment or who currently works in cryptography.

This book is well-researched with plenty of interesting information, but there isn't really much narrative structure. It feels like 5-10 short stories on the same topic.

Great story. I especially loved the blow by blow descriptions of the Naval battles.Well done. Shows an incredible depth of historical research from both the Allied side and the German side of the story.

The book is bogged down with latitude and longitude descriptions.. the title misleading. 80,% of the story is about the use and not the capture

You will be qualified to build and operate your own Enigma machine after listening to this book.

Seriously, despite the frequent deep-dives into complex details (which the author acknowledges up front), the writing is engaging and keeps the characters lifelike and relatable with their extensive biographical histories. The level of detail described indicates extensive, meticulous research, yet the author is able to keep the story moving apace.

Learning to read Enigma is one of the most important tales of WWII and was a true key to Allied victory. This book tells the story from high seas combat to inland waters and down into top secret intelligence centers of headquarters on both sides.

The reader, however, is awfully slow and insists on feigning a bogus accent whenever someone is quoted, be it Sir Winston Churchill (a particularly bad impression) or some random German official (a terribly mocking accent). I recommend listening at a minimum of 1.3 times normal speed to avoid a pall of boredom caused by the tepid pace used by the narrator.