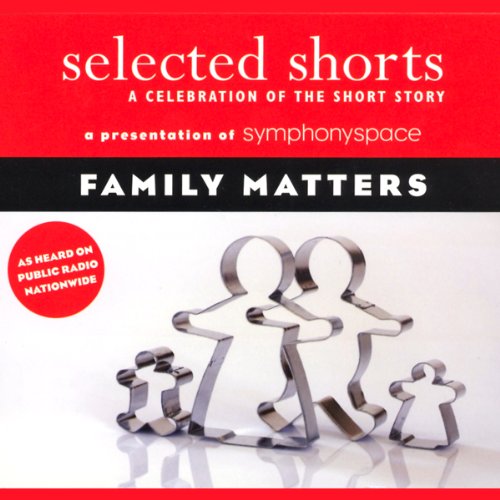 Hilarious and colorful episodes in the lives of families, many depicted from a kid's-eye-view, are the theme for this compilation. Being part of a family is often trying, and stranger than any fiction, but never dull and always worth it in the end. Join these very different families as they face the shrinking of parents, the pre-emptive guilt of First Confession, the secret worlds of children, and more!

Shirley Jackson's Charles
Read by Lois Smith
Laurie's parents are dying to meet the most misbehaved boy in school.

Frank O'Connor's First Confession
Read by Malachy McCourt
A guilt-ridden Irish lad fears his first confession may be his last.

Diane Leslie's A Life of Crime
Read by Jill Eikenberry
Love and passion, Hollywood style, from a girl's-eye-view.

Etgar Keret's Pride and Joy
Read by Robert Sean Leonard
A young man struggles to save his shrinking parents.

Rick Moody's Boys
Read by B. D. Wong
The world of boys.

"Both stories and readings tend to excellence....This program is a nearly unalloyed pleasure." ( AudioFile)

What listeners say about Selected Shorts

Can I have my point back?

Was ok - should have been e. Loved Linda Lavin’s story best but not worth using a point for.

it’s a bunch of live performances

and thus not quite an audiobook per se, so it was a bit misleadingly presented, but the stories are good and all but one do relate to family matters. If you don’t mind your own listening experience interrupted by audience laughter and applause then it’s a good little collection. As a book it’s too short, could have included more stories and been twice as long.