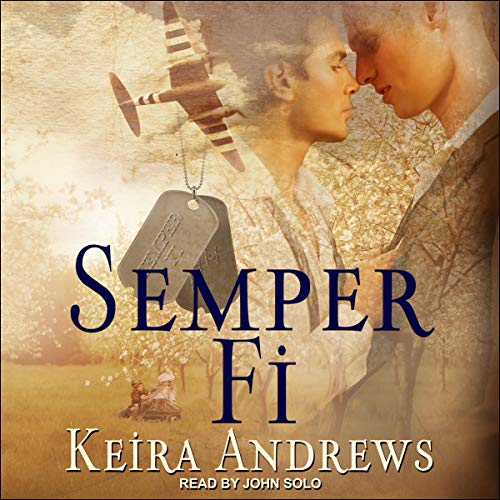 Written by: Keira Andrews
Narrated by: John Solo
Try for $0.00

The war is over. The battle for love has just begun.

As Marines, Cal and Jim depended on each other to survive bloodshed and despair in the Pacific. Relieved to put the horrors of war behind him, Jim went home to his apple orchard and a quiet life with his wife and children. Knowing Jim could never return his forbidden feelings, Cal hoped time and an ocean between them would dull the yearning for his best friend.

But when Jim's wife dies, Cal returns to help. He doesn't know a thing about apple farming - or children - but he's determined to be there for Jim, even as the painful torch he carries blazes back to life. Jim is grateful for his friend's support as he struggles with buried emotions and dark wartime memories. Then Jim begins to see Cal in a new light, and their relationship deepens in ways neither expected. Can they build a life together as a family and find happiness in a world that would condemn them?

What listeners say about Semper Fi

Narrator John Solo masterfully paced and easily carried me through the many layers of love, war and history of two lovers who survived it all to finally find their peace and love with each other. John portrayed vivid characterizations highlighting the gripping second world war, which was written extremely well. I loved the tension on the battlefield.

The main plot line is split between the war and six to seven years later. Cal is in love with his best friend, and after Jim’s wife dies, he goes to help out on the apple orchard. The story has remarkable injections of secondary characters, making the plot interesting and unpredictable.

When Cal and Jim finally connect, the sex scenes are hot and steamy, but the cold icy water: the old; should I?, shouldn’t I?, or it’s against the law, and it is wrong, I am going to hell, made me pull my hairs out! (as usual). The author played that song very well, the drama was balanced, taking the time period into consideration, it could not have been done otherwise.

I do recommend this audiobook. Especially, if you like some war action with your steamy MM action. If you love a good HEA, finding yourself wishing the audiobook never end, then this is the audiobook for you!

I have been waiting for this book to get an audio release for a long time and grab it the moment it went live. Keira wrote a beautiful romance between two wartime buddies during WWII. Their past was written in flashbacks chapters and you can really feel the bond between them built over bootcamp and fighting together. It’s a low angst and sweet story and John Solo did an amazing job narrating it. He brought the gung-ho and cocky exterior of Cal to the tee.

Keira Andrews is one of my favorite authors.
I read this story a while back and quickly fell in love with the characters!
I love military stories and this one was well done!
John Solo is fast becoming a favorite narrator of mine.
His portrayal of Jim was fantastic and so believable.
I love the hopeful glimpse we get into the future of Jim and Cal.
10 stars all around for me!!

I grabbed the ebook when it was on sale a few weeks ago knowing the audio was coming. Depending on how much you're paying for credits, it still may be less expensive to purchase the book and utilize whispersync discount pricing.

Wow! I'm already a fan of Keira Andrews' work, but this is a whole new level of storytelling. This is ALL. THE. FEELS. What I love most is that Andrews uses historical events, laws, and attitudes of the time period in a realistic and relatable way. Jim and Cal are humans in their triumphs, faults, and love. I felt fully immersed in the war in a way seldom found in romance novels.

I'm not a fan of switching back and forth between time frames (alternates between active service in WWII and post-war life in Tivoli, New York), especially with the added alternating of character POV's. However, I think the juxtaposition of Jim and Cal's developing friendship with their later romantic relationship adds an interesting depth to the story that wouldn't have been achieved otherwise.

As with all Keira Andrews stories, we get an HEA.

John Solo does a spectacular job here. I'm not sure if it was intentional, but he has this almost "radio announcer" affect to his voice, without being an over the top caricature. It gives an added immersion into the time period I'm not sure any other narrator would have achieved. Cal & Jim each have their own definitive sound and you always know who is speaking. Even secondary characters have particular and consistent voices. Perfection.

Trigger Warnings (possible spoilers):
[While she isn't egregious, Andrews does detail war with necessary reality & historical accuracy including death, fear, mutilation, racism/ethnic slurs and what we now would label PTS. This book is set in a time when homosexual acts were a crime and people's language, attitudes, & behavior reflect that.

I just finished the audio of this fantastic journey. I never talk about a book's plot, just how it made me feel. It had all the words and all the feels...not all good but necessary for the story. And it's an epic story of love in a time when there was so much evil in their world. Historical romance in a time of war, innocence, evil, denial, ignorance.....we've come a long way. Hot!! Trigger for those with war PTSD, a bit of graphic violence related to war. I'm dreading this book hangover with no regrets. Excellent narration.

This is a well-written historically accurate slow-burn romance with a satisfying ending. The chemistry is there and the time is invested to flesh out these two very real characters.

Not a compelling story
Not a good narrator
1 credit wasted
And I like WWII history, but it missed that also.

A great story! Makes for great reading ! I highly recommend this book to anyone who is looking for a good read.

The story is beautiful, how two young men are united by the war and their mutual love grows with time. Cole and Jimmy do everything to pursuits their relationship. Like very much Cole, how strong is always and open to not being cynical towards his own sexual orientation, encouraging always Jimmy to fight for them.I loved again John Solo voice and performance into each character.I read the book but I don't know why I like better the audio version.

The beginning was a little slow but this is one of the best I’ve listened to. Each Chapter makes you want more. There are hot scenes but this tugged at my emotions more which I enjoyed.

There is so much I loved about this story.
Filled with bits of post war, rural farmlife and 1940's nostalgia, this book lets the reader sink into the 1940's with ease.
I loved loved Cal Cunningham. What a sweetheart of a man. His humor, kindness, love and loyalty came through every moment of the story.
Apple orchard owner, Jim Bennett, who is Cals best friend , battle buddy and
eventual businesspartner. Jim is less easy to like. I do understamd his fear and reluctance to have a relationship with Cal, given that homosexuality is very much illegal at the time.
But it was much harder to empathize with him when he offers very little
comfort, understanding or kindness to Cal, his internal homophobia soo deep he can't even give small words of gratitude for Cal's unwavering loyalty and friendship.
When he finally admits his love to Cal, it comes at the very end of the story and it is lovely and hopeful, but still a little late.
I adore vintage settings in MM romance and Kiera Andrews really brings the era alive, the ww11 flashbacks were gritty amd grim, and realistic. Post war farmlife vivid.
John Solo's narration perfect, he brightly brings all the characters to life.