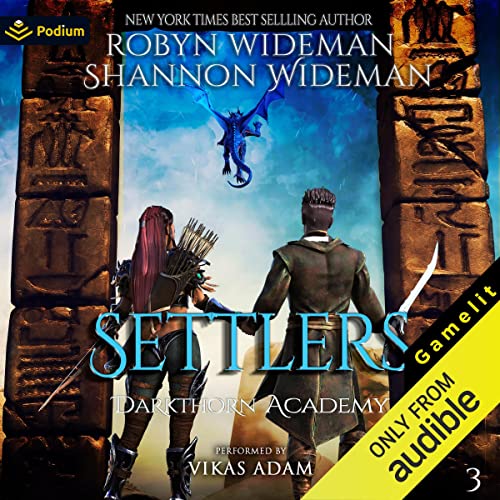 Needing a place to hide and wanting to rebuild Darkthorn Academy into the school it was meant to be, Jack and the Misfits travel to the remote gnomish regions of the Ancient Lands to the Valley of Eagles and the village of Kusharna. If they can survive it - the dangerous beasts, undead monsters, and a unique dungeon - they'll be able to grow into something truly special. But even the air in Kusharna is deadly, and everyone will have to learn more of Willmarth's mana techniques to grow stronger.

Even if they do manage to thrive in their new home, the empire has a few new tricks up their sleeve as well....

What listeners say about Settlers

not bad, not as good as the first

it isn't to bad, but it lacks the fun of the first book in the series, to much time spent on construction, which all could have been done in a sentence like 5 months of building and get strong has brought us here, than spending half the book on it.

This book was okay, but felt very much like a means to an end. There were some lovely scenes that I really enjoyed, but overall I was left wanting. I am sure the next book will be better as we will finally get a deeper understanding of what the upcoming war will really be about. I am guessing it won’t just be about race superiority. I am was surprised the orc___. I listened to the book so not sure how it was spelled… would serve such obviously horrible leaders, especially after what Dixon spouted during his battle with Jack. I was kind of surprised they didn’t stop fighting and leave Dixon to his fate. Anyway… overall it isn’t a bad book, but it’s not a book I would enjoy going back to in the future.

I love the series but find some flow of the words a bit awkward. I found in the first two things got a little repetitive (just refering to wording, not storyline) and this one has a few moments where it is awkward. Loved this book and can't wait for the next one!

Disappointed, this was a struggle (spoilers)

the book has only released yesterday, but I've been spoiled by other narrators. Vikas is good with voices but you can clearly hear the lack of urgency in proper situations, lacking intrigue or grandiose in his tone throughout. It sounds super awkward as in he's reading it to himself sentence per sentence, rather than telling a story. where you need intrigue and suspense at least in tense situations, I heard none. The writing has gotten simpler since the last two books I find. Either the narrator is taking pauses incorrectly, or the sentences are short and simple. sometimes some emotions of characters doesn't seem right... Your friends are missing just before a tornado that had you terrified and worried sick and you're laughing as if nothing is wrong the second you get out as your friends are still missing. I'm still not sure what the hesitations on contractions are from, it greatly adds to the awkwardness. Although this is mostly a negitibe review, I liked the last two books and, love the direction and the characters but this was a complete and total struggle to get through.

I remember liking the first 2 books, Idk what happened here.
I feel like I got on the wrong train or something. Maybe its my own fault tho, I'm not a kid ...but this book feels like it was written for 10 yr olds.

This was a huge let down after the 1st 2 books. Lacking in details. Very little story procession. Felt more like a side story.

Weaker than the last two.

I’m one of those that like to follow the little details of what makes our heroes environment great. I just felt the details were stronger in previous books. Series still has potential.

The story has moved to be completely unbelievable. I feel like I wasted my time up to this point hoping the story would have some common sense. There are so many places that are just nonsense it makes me upset. Disappointed is an understatement. Just one thing for the author, if you have trackers in the world no one would act like they are camping for fun in the wilderness. One more, you have the MC running around like he is a world power when they have nothing. The dragons did not go with them and they were the true power. Just stop and step back. I felt as a listener everything was written on the fly with no thought. I got to go. I hate writing reviews like this.