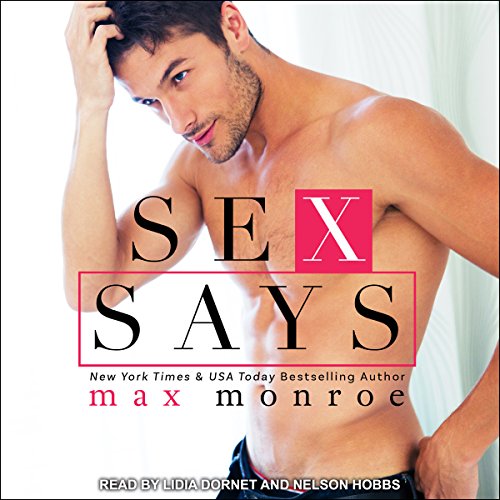 Lola Sexton is the writer behind Sex Says, a successful relationship column at the San Francisco Times. She's a pro at advising others on their love lives, but if there's one thing she isn't in the market for, it's love. Reed Luca is a wanderer and a jack of all trades. He doesn't believe happiness comes from a nine-to-five job, or that success is delivered through a paycheck. But opportunity often finds its way to those who aren't looking. When Reed signs up to write an anti-Sex Says relationship column, the result is all-out war.

What listeners say about Sex Says

I loved the Billionaire Series and always look for more books by this group of authors. I was expecting to laugh out loud at least once. Don't hold your breath. Hold on to your money. Narration is bad, too, which doesn't help. Still LOVE the other books though, and have listened to them more than once.

This book has been on my TBR list since 2017 for what ever reason I just never picked it up but while scrolling through Audible Escape I saw who the narrators are and I love both so I thought lets give this one a chance.

I am glad I did even if I wasn’t a fan of our hero. Liar’s even well intended/white lies turn me off. I just can’t wrap my head around why someone would do it and do it as much as Reed does.

Lola really was the star for me her whimsical ways intrigued me maybe because I am more like her sister character. The fact that Lola just goes with the flow and does what she needs or wants to. I just really liked that she has her opinions and that is that. If you don’t agree ok but she is still right. Lol

Over all the book was fun and interesting and kept me interested even if I didn’t like Reed until the end. ;)

Again the narration was awesome and made these character leap from the pages.

I love this book so much that Even on my shits day I reread and now replay it. If you want sex life and funny ass comment this is your book

I must have slept through the red hot parts. This is more seductive at best. There wasn’t a lot of sex period.

The story was good. I enjoyed the banter but the lead female got on my nerves quite a bit. She was so hateful to him at times. It seems like he grew and changed a lot more than she did and I think she should have given him a bit of a break. The thing I liked the least was his hot to cold in two seconds after he saw his friend. How do you ‘stalk” someone and obsess over them and then go as cold as ice? That just didn’t seem like him, even if he had lost everything.

The narration was good; I prefer a male narrator or at least dual narration.

I think if the book had not been rated red hot and I had not expected something else, I would have enjoyed it more.

Worth a listen on audible escape.

I can't bring myself to finish this one

I'm 13 chapters into this book, and I can't bring myself to finish it.

This book is not only badly-written and implausible, it also scares me (and not in a pleasant, &quot;I'm reading a suspense novel&quot;, Stephen King kind of way). Lola, the female lead, tells Reed MULTIPLE TIMES and with *absolutely* no ambiguity that she wants him to leave her alone. His response is to blackmail a police officer into looking up her address and revealing it to him, then going to her apartment building and conning someone into letting him through the secure-entry front door. His inner monologues about falling for someone's personality and the value of various types of women sound like the musing of a serial killer. He's stalking her, and it's being played off as comedic and sweet. It's not! It's creepy as hell, and feels like a romance novel written by an MRA. Gross.

I have enjoyed other Max Monroe books, but this one is a definite pass.

This book has everything a RomCom needs, LOL moments and lots of them, a romance story, a quirky h and a smirking and sarcastic H.

This is one book that let me laughing. Max Monroe have out done themselves with this book. I was sad that the book ended. Read it!!

He said she said

This enemies to lovers pairs two of the quirkiest characters. I didn't connect with this story as much as I have other series by this duo but it definitely had me laughing.

started out good but...

I wanted to like this one. I love Max Monroe in general so please don't judge Max Monroe by this book if it is your first. Try another one. This one was disappointing and weird. It started out with great promise and humor and then fell flat hard. The main character, Lola was supposed to be quirky but just came across as witchy and the story itself just twisted up into words of blah.