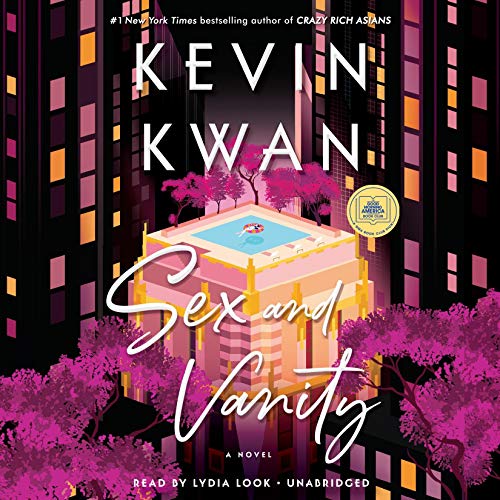 Written by: Kevin Kwan
Narrated by: Lydia Look
Try for $0.00

"Kevin Kwan's new book is his most decadent yet." (Entertainment Weekly)

The iconic author of the best-selling phenomenon Crazy Rich Asians returns with the glittering tale of a young woman who finds herself torn between two men: the WASPY fiancé of her family's dreams and George Zao, the man she is desperately trying to avoid falling in love with.

On her very first morning on the jewel-like island of Capri, Lucie Churchill sets eyes on George Zao and she instantly can't stand him. She can't stand it when he gallantly offers to trade hotel rooms with her so that she can have a view of the Tyrrhenian Sea, she can't stand that he knows more about Casa Malaparte than she does, and she really can't stand it when he kisses her in the darkness of the ancient ruins of a Roman villa and they are caught by her snobbish, disapproving cousin Charlotte. "Your mother is Chinese so it's no surprise you'd be attracted to someone like him," Charlotte teases.

The daughter of an American-born Chinese mother and a blue-blooded New York father, Lucie has always sublimated the Asian side of herself in favor of the white side, and she adamantly denies having feelings for George. But several years later, when George unexpectedly appears in East Hampton, where Lucie is weekending with her new fiancé, Lucie finds herself drawn to George again. Soon, Lucie is spinning a web of deceit that involves her family, her fiancé, the co-op board of her Fifth Avenue apartment building, and ultimately herself as she tries mightily to deny George entry into her world - and her heart. Moving between summer playgrounds of privilege, peppered with decadent food and extravagant fashion, Sex and Vanity is a truly modern love story, a daring homage to A Room with a View, and a brilliantly funny comedy of manners set between two cultures.

"Narrator Lydia Look enchants in this contemporary adaptation of A Room with a View.... Look delivers a dramatic performance that keeps the energy high and the dialogue extravagant. Against the backdrop of outrageous characters, Look’s skilled interpretation of Lucie’s sweet nature and George’s reserve makes them the charming center of nonstop parties and fashion moments. Listeners fond of Kwan’s previous series will not be disappointed." (AudioFile magazine)

"True love will find a way, even among the status-obsessed and filthy rich...[With] irresistibly knowing humor and delightful central characters...While he’s engineering the timeless love story and continuing our postgraduate education in all the things money can buy, Kwan manages to take a few swipes against snobbery and racism. Nice. This is the only way you’re getting to Capri this year. Why resist?" (Kirkus)

“Kwan follows up his Crazy Rich Asians trilogy with an intoxicating, breezy update of E.M. Forster’s A Room with a View...Kwan exploits the Forster frame for clever references - including Merchant and Ivory - and provides amusing footnotes. Kwan also relishes describing lavish meals and haute couture clothing, as well as Isabel’s decadent wedding and Cecil’s imaginative, over-the-top proposal. There are moments both catty and witty...[A] delectable comedy of manners - the literary equivalent of white truffle and caviar pizza.” (Publishers Weekly)

What listeners say about Sex and Vanity

Enjoyed the book. But would have liked for it to be less predictable. Expected a little bit more

It was a bit boring and I felt like I kept waiting for the story to start.
There were a few funny moments but overall I was disappointed.

The details are everything

Not enough details about de relationship of Lucie and George. I couldnt really understand why they loved each other. A couple more chapter and the book would have been perfect.

I loved jumping into the world of the fabulous & ritch once again. Much the same vein as the CRA trilogy, the vibrant characters were entertaining and upbeat. A great summer listen which left me longing for travel to Capri & Italy!

All the characters were incredibly awful and you can’t find yourself connecting to any of them. I could even find it in myself to route for their failure. It just seems like a lot of name dropping and a couture catalog of outfits and places. It tried to be a good book but failed.

Loved this story. Great performance. It was a little predictable and overplayed, but in a way that was nice.

Fantastic and Magnificent all together

Kevin is truly a gifted writer. I loved every minute.
I highly recommend this book.

It’s time to retire KEViN KWAN. I want every body’s money back. It is AWFUL.

I liked the story but it was hard to listen to. the narrator did not keep up with accents, they changed all the time. I didn't know who was talking to it was hard to follow.

Thank you Mr. Kwan! Can not wait for the next chapter ! Decadently delicious Waspy Witt

Gorgeous, lovely and fun! It's a perfect vacation escape. The accents performed can be a little off putting, but overall, very enjoyable.

Never Connected to the Characters

I love the Crazy Rich Asians series so I immediately bought this book when it dropped. It’s the same style as the Crazy Rich Asians series (detailed description of wealthy living), which I like, but for some reason I didn’t enjoy that as much as I had before. Maybe because I felt like it distracted from the main storyline more than it should have. Also, I didn’t feel interested in any character, especially not the two leads. I didn’t understand where their connection came from aside from their initial attraction to each other. Lucie’s strong refusal to acknowledge her feelings for George got excessive. After finishing the audio, I was surprised that it had been so long because I felt like not much had actually happened in the story.

I loved Lydia Look’s accents and voice choices in the Crazy Rich Asians series but this time they seemed less consistent. I know some of the characters had multiple influences on their accents (British and southern) but the blending of those accents made it harder to identify different characters.

All that being said, I did enjoy the book. It just wasn’t as great as I expected.

Worthy of a fun listen

The reading/performance of Lydia Look as she read this book was magnificent. I don't know of I would have enjoyed it as much if I had read it myself. Though, I was still caught in fascination as the storyline followed the main character through her high class life and humble attitude.

I liken this book to Whipped Cream. Big and Frothy, takes up a lot of space, but is full of Air.

Sweet and Simple, the characters are predictable and reading it reminded me of similar stories but with a buzzy new spin. I find myself intrigued by this new(to me) Asian world Kevin is providing access to. One I have only experienced from the periphery. Though the characters tend to be a bit simple and flat, it’s still a good fun book. A perfect beach or poolside read as you toast in the sun, burning not wanting to move until you finish the part of the book when Lucy, the protagonist, finally is called to account for her little machinations. ;)

I needed a fun summertime story and this was perfect. Even though the plot was predictable; I enjoyed the escape and the narration was quite good as well.

This was as funny and entertaining as the Crazy ones. I would love if you developed some of the other people and told their stories.

Part I was initially hard to follow but after that a great read. Kevin Kwan always makes the reader want to be there to see the amazing views and to taste the incredible cuisines.
.

I liked crazy rich Asians so I thought this would be just as good. But this tried too hard and came out flat. Some of the characters didn’t make sense as to why they’re there. The story was predictable. The performance made it hard to follow...that probably made it worst for me.

Good, but not as good as CRA

The narrator was great and the book has the same feel as Crazy Rich Asians (CRA) with the pedigrees, name dropping footnotes, etc. However, I just didn’t care as much about the characters in this story. In Kwan’s other books, I cared more and that allowed the eccentric and excessive behaviors of the characters shine without being annoying. However, in this book, the fiancé (being vague to avoid spoilers) was just an awful addition. It didn’t ring true at all that this unauthentic person would ever be chosen by their partner. It was ok, but I’m not sure I’d recommend it to my book reading friends though.