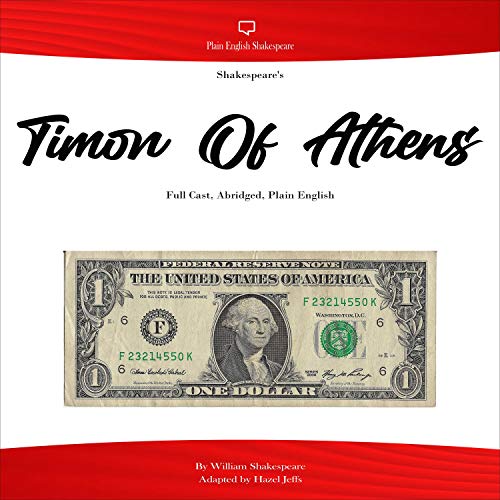 This production is abridged and in plain English. Timon of Athens (The Life of Tymon of Athens) is perhaps Shakespeare's sharpest satire on wealth, greed, and betrayal. Scholars generally classify Timon either as a tragedy or a problem play.

Timon is wealthy and generous, but his is a spendthrift throwing lavish parties for his guests and offering financial support on a whim. This means everyone loves him, until the money abruptly runs out as Timon finds creditors at his door. Timon's friends are no longer as welcoming. Timon departs Athens, where despite being destitute, he still has an influential role to play.

It is believed that Shakespeare wrote the play with Thomas Middleton in the early 1600s. The play is believed to draw on earlier works from William Painter, Plutarch, and Lucian. Timon is among Shakespeare's less popular works and has been criticized by some scholars, though others view Timon himself as among some of Shakespeare's deepest characters.

This adaptation by Hazel Jeffs presents an abridged version of Shakespeare's work in plain English. It is a full cast theatrical production lasting around 20 minutes.

What listeners say about Shakespeare's Timon of Athens