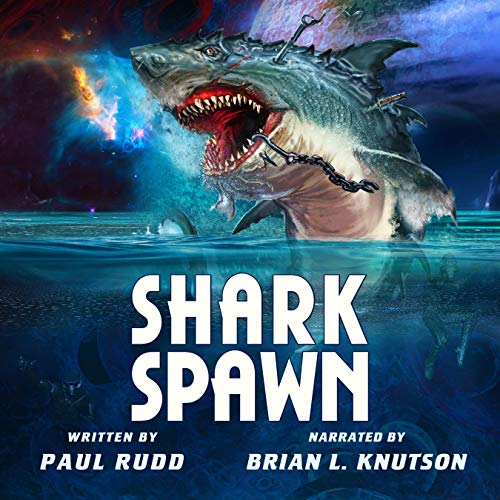 A space yarn, with teeth.

It's the year 2124. Twenty years have passed since terraformers crossed the galaxy to find a new home on Centauri Prime.

One by one, the human colonies have been taken over by Earth corporations. Only the settlement of Kinship remains untouched by galactic credit.

By using the anticoagulant and antibacterial properties of shark skin tissue, Hank Cranford hopes to manufacture a vaccine that will enable long-term survival in the strange waters and atmosphere, and he hopes also to finally escape Earth's clutches and lead his colony into a new world.

Captain Banyard, a seasoned smuggler, crosses space with a precious and unusual cargo. Enormous tanks in the hold of the Bayonet store a variety of sharks that are to be delivered to the domed habitat.

When one of the Earth sharks escapes from captivity, blood is spilled, lives are lost, and a new breed of shark is spawned.

Welcome to Centauri Prime, an aquatic paradise - at least that's what it says in the brochure!

What listeners say about Shark Spawn

have you ever wondered what would happen if the creators of jaws three and aliens three got together to make a movie?
in shark Spawn, writer Paul Rudd puts forth a valiant effort, to tell a story that brings an alien world and a very ancient nightmare to life.
on Alpha Centauri, there’s plenty of water… Necessary for the survival of humanity as it seeks to flee a polluted earth, but the atmosphere makes surviving on the planet outside of domed habitats impossible. but early Terraformer‘s and marine biologist I’m working on a solution, and that solution involves importing a wide variety of shark species into this Alien environment. and when a make a corporation plus the steel the secret formula for using shark DNA to mutate humans into a species that can survive on our Centauri, I disastrous series of events leads to releasing a mako shark loose in an ocean without any rivals.… And ocean where her children, mutated by the experiments and strange environment grow to even more dangerous proportions and intelligence.
now throw in the usual cast of characters: the mistrusting scientist that only wants to do good, the CD mayor looking to please corporate interests, and… Of course… A handful of hormone filled and genetically altered teenagers and some late night swimming parties and you have a summer blockbuster on your hands.… Or at least a made for SYFY movie of the week.
for his part Rudd does a pretty good job at weaving a fun and interesting tail, but that’s not stray far from the standard stereotypes you would find N a Hollywood flick of this type. there is a Chi good guy kid, a beautiful girl that likes him but he’s dating the obnoxious jock boyfriend, a hippie doctor, a space pirate with a bombshell first mate and a hot blonde android, and a dozen other characters straight out of central casting.
and if you’re able to go with the flow and enjoy it like you enjoy do some summer blockbuster of the year, Rod story does pretty well. It has a good plot, some feasible science without too many leaps of weird logic that you find in almost every type of sci-fi story and despite The environmentalist tropes of a polluted earth and the moral ambiguities of terraforming, it does not get preachy on any of those subjects. Politics does not interfere in the entertainment.
however, One feeling that I kept getting snagged on was the wordy dissertations on the setting constantly being crammed into characters mouths. The book opens up with the space pirate giving a verbal dissertation on how his space ship worked for no reason other than to inform the reader. while info dumps like this are necessary for science fiction, Having someone read them out loud like a school report in front of the class is awkward.
despite these little snags, the story is mostly enjoyable and is greatly helped along by the excellent reading by narrator Brian knutson. Knutson‘s narration voice is A deep dark velvet I can to the news readers of the past like Walter Cronkite and Edward Rr murrow. you listen and you just want to believe what he saying. furthermore, his character voices R rich and vividly unique, giving each character their own identity. it made it even the awkward dissertations of the dialogue bearable and the entire story and entertaining diversion.


overall I think shark Spawn is an entertaining way to eat up a bit of your listening time.

this reviewer was provided a complementary copy of shark Spawn for review purposes.