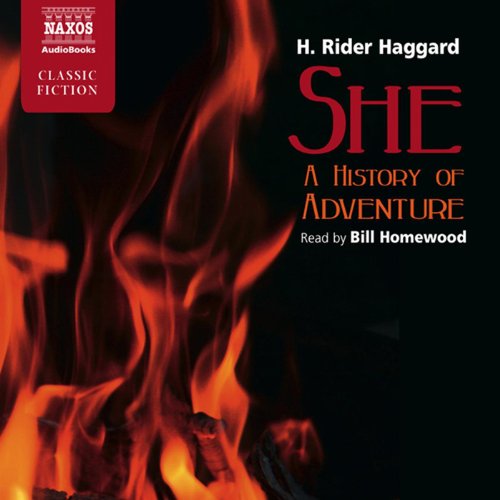 This imaginative classic from the late 1800s is expertly narrated by Bill Homewood. The story is a first-person narrative that follows the journey of Horace Holly, a Cambridge University professor, and his ward, Leo Vincey, to a lost kingdom in central Africa. After a shipwreck, they encounter a primitive people called the Amahagger in the lost kingdom of Kor and a mysterious white sorceress who reigns as the all-powerful "She-who-must-be-obeyed." Homewood exquisitely captures the wonders and horrors encountered by these Victorian gentlemen on their adventures. His calm, well-paced narration adds a dimension of reality to a tale of natives, murder, and rage. Modulations of tone and inflection add to a performance that keeps listeners entranced.

Somewhere in Africa, a tiny, primitive tribe, the Amahaggers, live secretly amongst the debris of a lost Egyptian civilization, ruled by the beautiful semi-goddess Ayesha, or She-who-must-be-obeyed. Ludwig Horace Holly, a Cambridge academic, is reluctantly drawn into plans for a voyage in search of this legendary queen. With his adopted son, Leo, he sets out on a brave journey, following a trail of clues. Shipwrecked and captured by cannibals, their voyage soon turns into a nightmare.

Loved it. Looking forward to other books by the same writer. Wel read by narrator