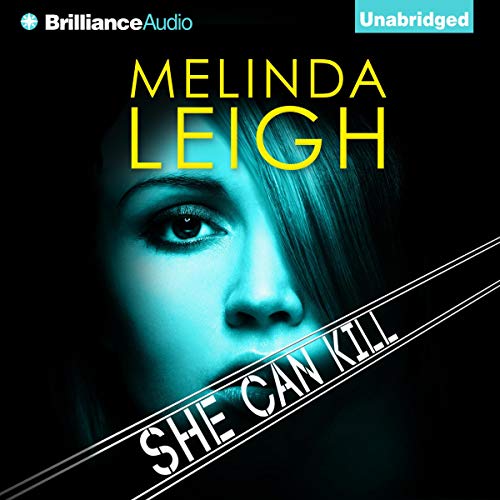 Written by: Melinda Leigh
Narrated by: Amy Rubinate
Try for $0.00

From Wall Street Journal bestselling author Melinda Leigh, the RITA Award finalist that will keep you on the edge of your seat.

Twelve years ago, Cristan’s wife was murdered. He was forced on the run to keep his infant daughter safe. They’ve finally settled in a small Pennsylvania town, but he can’t shake the feeling that they are being watched.

Newly divorced, Sarah is ready to start over. As her ex becomes increasingly hostile, she appreciates help from a neighbor. But the violence she senses beneath Cristan’s polished manners makes her wary. Then she discovers someone else is stalking her - someone much more dangerous than a jealous ex.

Cristan fears his wife’s killers have caught up with them. Now he must face his nightmarish past and hope his decision to stand his ground doesn’t get them all killed.

What listeners say about She Can Kill

Like all Melinda Leigh novels there is also a shade of romance, but the action and suspense really make the novel worthwhile.

She Can Kill is the sixth and latest release in Melinda Leigh's fantastic She Can series. I loved all the previous books and couldn't put this one down either. I actually had to add the audio book version so I could continue with the story when I didn't have time to sit down to read.
She Can Kill is Cristan's and Sarah's story, who first appeared in book 2 She Can Tell, but each book works fine as a stand alone, as the plot focuses on one particular couple.
Cristan has been trying to escape his violent past ever since his wife and her arms dealing family were killed twelve years ago and he escaped with their young daughter. His daughter is babysitting for Sarah who has also fled from violence in the form of her abusive ex-husband Troy who is still creating all sorts of problems for her.
The suspense really builds up when Cristan's past catches up with him and Sarah's ex-husband turns more than a little unstable.
I love how the characters from the previous books, especially Mike and Sean, are included in the plot and this great family-and-friends-in-a-small-town atmosphere is created. As the tension was building up towards the final confrontation, I never would have predicted the twists Melinda Leigh threw in. Very well written and highly recommended for any romantic suspense readers. I sincerely hope there will be more of this series in the future.
The narration was excellent again with distinct voices, good pacing and intonation. Just pure pleasure to listen to.

She can write!!! Another win!!

I like Melinda Leigh because she always manages to entertain me. This story is no exception. You have the story of Cristan and Sarah. Cristan has fled to Pennsylvania after a cartel hit which leaves him fearing for his daughter's safety. Sarah has an ex husband who is abusive and she is trying to protect her two young daughters. They are drawn together and find love despite an unexpected threat from Cristan's past and Sarah's ex. This story was a little predictable to me which is why I gave it four stars. I do recommend for a sale or a credit.

This book series is great and I recommend it to everyone. Melinda Leigh is one of my favorite author.

Loved loved loved the strong storyline with a few detours to the end. Just when you think you have it figured out, boom another twist.

This series features strong women who find love. On the way they have all kinds of difficulties, but in the end it's good. I have read them out of order, but they all still made sense.

She Can Kill Book 5

Well this book has taking the reating but I still like book 4 the most becuase from that book the author has come into her own writing sytle. She also did a much better her I like her work better I can't wait to find out about the next work.

Even though the stories in this series have a small bit of a formulaic feel, each one has still been a great read/listen. This story is another great example of the author's devious plots as several threads weave together into a non-stop tale of suspense, intrigue, and duplicity.

Sarah is a character we've seen before in other novels from this series. She's had a tough time with a nasty ex, but she's trying to build a new life and put all that behind her. Cristan also knows something about building a new life and attempting to leave the past behind. However his past is unknown to anyone in his current life, and he intends to keep it that way. He's an amazing soul who seems to be perfectly wired for parenthood. He's also smoldering, with a Latin lilt and the dark good looks to match. But his sole focus is his daughter.

As the past comes back to haunt both Sarah and Cristan, their lives become entwined in unexpected ways. This book travels at the speed of light, taking the reader on a journey that is every parent's nightmare. If you're new to this series, this book can easily be read as a stand-alone, even though several characters from the other novels have key importance here. No problem- the author deftly keeps the reader up to date and in the loop, so to speak. If you start here, chances are very good that you'll be going back to catch the rest of the stories in this series. They're all delightfully twisted.

Great story plot, loved the action. The characters were interesting and the narrator did a great job with all the characters. This was a thrilling story. I definitely recommend this book.

The story started off with great action writing. I think the characters are all 'wired wrong' though, despite the author's justifying their actions and choices.