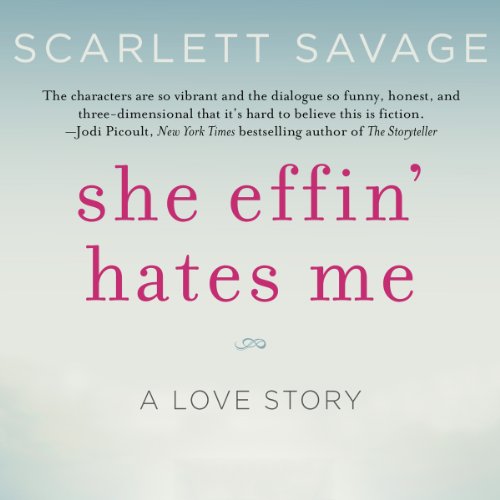 She Effin' Hates Me

Written by: Scarlett Savage
Narrated by: Emily Durante
Try for $0.00

Molly has arrived home from Vassar to reveal that she has an important announcement to make. Her mother, Suzanne, is convinced that Molly’s news is history repeating herself and that she’s about to become a 36-year-old grandmother. Suzanne’s mother, Ava, develops a case of impending great-grandmother fever - that is, when she’s not spying on the new next-door neighbor, Buddy McKinley, who turns out to be a blast from her past.

Decades earlier, Buddy was the business partner of Ava’s late husband, as well as his best friend during the Vietnam War. Ava feels she has good reasons for hating Buddy she blames him for the fall of their business, an Irish pub that was a staple of the community. The loss not only destroyed her husband but also pushed her headfirst into the vodka bottle.

Suzanne eventually finds out that Buddy and Ava’s past goes back much further than either has admitted. She begins to wonder whether Ava truly hates Buddy, or whether her feelings are much more complicated, as are her own when Molly announces that she’s not pregnant, but gay.

Based on the award-winning play, She Effin' Hates Me is about three women relearning to love one another for who they are and, more importantly, for who they’re not.

“Crack open Scarlett Savage’s novel and you will feel as though you’re sitting in the living room of relatives you love...and yet somehow can’t avoid when you desperately want to. The characters are so vibrant and the dialogue so funny, honest, and three-dimensional that it’s hard to believe this is fiction. Something remarkable happens as we follow three generations of strong women through a startling revelation that redefines the relationships between them all - all of a sudden, we’re not on the outside looking in. We’ve become part of the family.” (Jodi Picoult, New York Times’ best-selling author)

What listeners say about She Effin' Hates Me

She hated him and I hated this book

The story is predictable, sappy sweet, and ultimately boring. Enduring love deserves a better context. The narrator was only average, although adept at distinguishing between characters. The characters themselves are like the story--unbelievable, sappy, boring.

Well-Executed, But Shallow and Predictable

I have to admit that I couldn't finish listening to this. The narration is very good, and I think that I will seek out this reader in other books. The writing is well-executed, but the actual story seems shallow and predictable. At first, I was attracted to the light, witty banter between the characters. Then I started to realize that I could predict what the characters were going to say next - and that all of the characters talked the same way (regardless of the voice that the narrator gave them.) Some people might see this as a light summer listen, but I really don't have the time for it.

Nothing surprising in the story. If you like to be reminded of how well you do or do not deal with your own mother than this book is for you. The love story is only a sidebar to the main story of 3 generations of women dealing with their life issues.

Dull, predictable and a bad case of stereotyping

I pushed through too the end but there were times I considered marking it read. So dull. Zero excitement or actual drama. The "conflict" was hardly conflict and then each character is at face value a stereotype.

I thought it was good reading about 3 generations loving, fussing and living live. Sometimes it takes awhile for all to mesh together, but in the end family is family faults and all.

Couldn't bring myself to lessen to it for more than an hour or two at a time. It took me over a week to lessen to this book.it was just that boring. There were some funny parts, at least in the beginning. the author had too much to tell in one book. It starts out with mom divorcing dead Beat dad. Then grandmom hates the old-time friend. that would have made a good story with more embellishment. daughter comes out of the closet that's another chance for a book. Ms. Savage you were all over place with your story. You do have some good points to be made but got lose in the back and forth between the storylines.

I absolutely love this book.
Three generations of women going through changes and growing closer.
Not a love story per se but rather a story about their love lives.
Loved the narration too

This was a great novel about three generations of women who all find their themselves together going through changes. It was wonderful and the narration was great as well.

Loved this story. Loved the presentation.

From start to finish I was hooked. Great to read a book about women, generational.