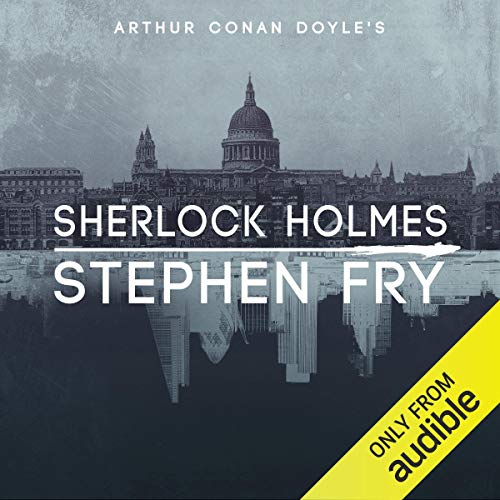 "Fry's Holmes is crisp and high-handed, his Watson enthusiastic and bemused, and the rest of the narration colorful without being mannered. Have fun. Winner of AudioFile Earphones Award." (AudioFile magazine)

"...it was reading the Sherlock Holmes stories as a boy that first turned me on to the power of writing and storytelling." (Stephen Fry)

Ever since he made his first appearance in A Study In Scarlet, Sherlock Holmes has enthralled millions of fans. Now Audible is proud to present Arthur Conan Doyle's Sherlock Holmes, read by Stephen Fry. A lifelong fan of Doyle's detective fiction, Fry has narrated the complete works of Sherlock Holmes. And, exclusively for Audible, Stephen has written and narrated nine insightful and personal introductions to each title.

Fry is an English actor, screenwriter, author, playwright, journalist, comedian, film director and all round national treasure. He is the acclaimed narrator of The Hitchhiker's Guide to the Galaxy and recently recorded The Tales of Max Carrados - which earned Fry the accolade of "quite irresistible" from the Washington Post.

"The pairing of Fry and Holmes is a bit of a marriage made in heaven...In the Holmes books, he reads just under a thousand pages in his wonderfully even and infallibly intelligent voice, touching the characters deftly...[H]e finds a variety of accents and tones for the many foreigners Holmes encounters; his American accents are lightly done, without attempting, for example, a Utah accent in 'A Study in Scarlet'.... Fry's triumph is in striking and maintaining exactly the right tone for the narrations, all, with a handful of exceptions, in the comfortable, slightly pompous voice of Dr. James Watson, Boswell to the great man's Johnson. Fry's Holmes is sharp-witted and mercurial, though not especially idiosyncratic: quite right, as he is merely being reported by deal old Watson. But Fry's skill in phrasing and articulation over the whole 60-plus hours is beyond praise.... Every consonant in place, every phrase perfectly shaped and filled with sense. There are other complete recorded Holmeses...but none that sustains the course so buoyantly, and none with the added pleasure of the readers' pithy commentary on each book." (The New York Times Book Review)

"Sherlock Holmes. Narrated by Stephen Fry. Need I say more? Honestly though, what a perfect way to get away from it all while you're cooking dinner, commuting, or tidying up this weekend." (Buzzfeed)

"Having already narrated one of the world's best-selling book series in the form of Harry Potter, Stephen Fry has returned to the recording booth to take on another hugely popular series." (BBC)

"It doesn't get much more British than Stephen Fry talking about Sherlock." (Mashable)

"Sherlock Holmes is the unfading literary icon - as beloved and as relevant as he was over 120 years ago. To celebrate his currency, Audible has released Sherlock Holmes: The Definitive Collection; Arthur Conan Doyle's complete adventures of the famed detective, as narrated by lifelong fan Stephen Fry, including nine personal introductions exclusive to Audible." (The Independent)

What listeners say about Sherlock Holmes

Stephen Fry's performance is an extraordinary achievement. He immerses you so fully, with cast after cast of complete characters, that you feel totally a part of the world of Holmes and Watson. He also demonstrates the excessive talent of the author, who conjours mood, character and plot so perfectly. It has been a decadent pleasure.

At some points the audio seems to have reverberation and it can get pretty annoying taking you out of the story. Tested it on multiple devices and new and old headphones and all have the same issue at the same parts.

Not having been an avid Sherlockian before, I must say that listening to this collection, although missing The Casebook stories my appreciation of Conan Doyle's opus is unbound. To top it off, the narration by Stephen Fry is suberp, awesome, impressive, grand, and second to none.

Something I’ve Looked Forward to...

For years I’ve wanted to dig into the entirety of Arthur Conan Doyle’s Sherlock Holmes and his seemingly endless adventures. The series narrated by Stephen Fry is delightful- a real treat! #Audible1

This collection proves that audiobooks can outdo the written page. Stephen Fry has an impressive variety of accents at his command, coupled with a perfect level of theatricality, and flawless reading of the text. At over 62 hours, this audiobook is a feast. I thoroughly enjoyed every minute of it!

Charming stories, beautifully voiced. Very relaxing to listen to, and the characters really come to life.

Voice acting in this audio presentation are exceptional. Love Sherlock to the end of time.

A truly entertaining performance by Stephen Fry places you among the characters and cases of the classic series.

Never read Sherlock but what great writing. And what a listen...fantastic! Congrats to Fry and audible for this production.

Fry is a wonderful reader.

The stories are very good except for the sexism and racism, which almost made me want to stop listening.

Strepen Fry’s introductions to each collection were fascinating.

I noticed that many have talked about the chapters being in the wrong order... I have just made a chapter guide for myself before I continue listening and will copy/paste it below in case anyone finds it helpful. I really enjoy listening to these books but wanted to make the navigation a bit easier!
Note: "Chapter" refers to the audible "chapters" button, not to Stephen Fry saying "chapter 1, chapter 2, etc).

Love how this audiobook has named each chapter like in a regular book. No more guessing which chapters to pick just by number, now it’s clearly titled. It’s especially useful because of the length of this audiobook. Stephen Fry is an excellent narrator. I enjoy his informative introductions.

What is the correct order to listen?

Would you listen to Sherlock Holmes again? Why?

Great listening experience, but chapters not in orders and hard to sort it out... To the publisher: Please suggest the order as a remedy!

The way this audio book is organized is unfortunate.
You can't search the titles easily, which makes it frustrating to find the story you want to listen to. Imagine having to go to Amazon.com to see how the chapters are organized to find the right chapter to listen to your story of choice. That's what I had to do.
Please fix it with an update if possible.

Stephen Fry is the best at reading the SH stories.

The chapters are not in order!

I agree with another reviewer's headline: The chapters are not in order! Part 2 (file 2) Chapters 1 -7 should be The Sign of Four, Part 2 (part 2 of the story). It's not there. I didn't get to hear all of The Sign of Four. The manufacturer has to re-organize the audiobook, and then make sure the PDF file matches. POSITIVE COMMENT: The performance is fantastic.

I had purchased some time ago " The Complete Sherlock Holmes: The Heirloom Collection "Narrated By Simon Vance a favorite actor since I discovered his narration of the Stieg Larsson Trilogy "The Girl With The Dragon Tattoo" being book 1. I enjoyed the Stories and narration and listened the complete edition. It was wonderful. When I recently discovered a new "S. Holmes" audio book edition narrated by Stephen Fry whose work I admire greatly, I was tempted to purchase the stories all over again. I was also very much interested to hear Stephen Fry's commentaries on each of the wonderful stories written by Arthur Conan Doyle. It proved to be one of my better audio book decisions. I rediscovered Holmes and was swept away by this superb edition, narrated by an actor with a lifelong appreciation of the Holmes characters and work. Now you can have a visit at Baker St. and sit at Watson side. Thank you to Mr. Fry for this exceptional effort. - P.S. to Audible I would very much like to purchase Mr. Fry's reading of the entire Harry Potter series even though I own the Jim Dale version...with all due respect to Mr.Dale

Any audiobook that is a series of short stories should at the very least have the title of a story in the navigation. This is obviously Amazon's fault but it's a big one. If I want to find any particular story I have to go through each chapter and hope it's the right one.

The series of stories are of course fantastic and Stephen Fry does them justice.

To be noted at the top. As several people have pointed out this is not actually a DEFINITIVE edition nor is it complete. It is missing at least 12 short stories collected as the Casebook of Sherlock Holmes, most likely because the provider of the content was unwilling to deal with the copyright issues still held up in the US. It also does not contain the semicannonical Lost Special.

If this does not bother you it is an excellent deal with lots of content excellently read by Stephen Fry with additional introductions by same.

Great as this is, and I could go on for days about how great it is, it’s not ALL there. The final collection called “The Casebook of...” and the 12 adventures there in are notably absent.

Could there be a better bargain? Nearly 63 hours of Sherlock Holmes read by Stephen Fry - this is an Arthur Conan Doyle fan's dream, and I, for one, could not resist!

My Audible library already contains the complete canon read by the great Derek Jacobi. My family owns the BBC DVD collection starring Jeremy Brett, and we are enthralled by the modern interpretations of Benedict Cumberbatch and the TV series "Elementary".

So, Holmes is not new to me. Yet the past few days have found me immersed in this new reading by Stephen Fry, and I have been with delight pulled into the tales of 221B Baker Street in Victorian England all over again.

Granted these classic stories can be dated. The listener/reader sometimes cringes at the prejudices and stereotypes of the past. Yet there's a reason this character goes on and on, bringing something to every generation and in each interpretation.

Fry's love for the material is clear. He narrates with an actor's skill and a fan's enthusiasm. The introductions add a welcome personal note, revealing what Arthur Conan Doyle's work has meant to the narrator. I still admire the Jacobi readings, but Stephen Fry's performance, in my opinion, is even better!

If you, like me, are an old fan, then I don't think you'll regret investing in yet another visit with Sherlock Holmes guided by the wonderful talent and voice of Stephen Fry. If, for whatever reason, you and/or your family have not read or heard the original tales, please consider experiencing them together - perhaps during car trips or before bedtime. Hours and hours of good, old-fashioned storytelling - a credit could not be better spent.