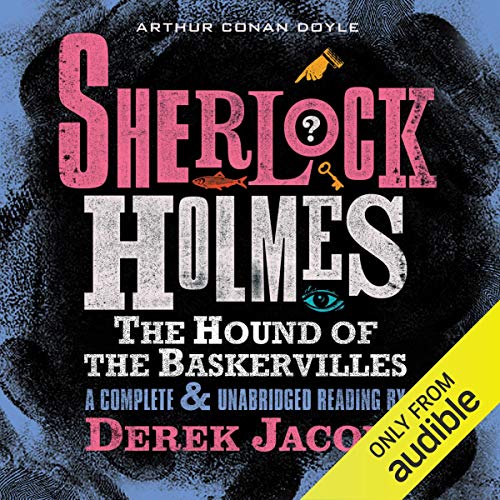 Sherlock Holmes: The Hound of the Baskervilles

Could the sudden death of Sir Charles Baskerville have been caused by the gigantic ghostly hound which is said to have haunted his family for generations? Arch-rationalist Sherlock Holmes characteristically dismisses the theory as nonsense. Claiming to be immersed in another case, he sends Watson to Devon to protect the Baskerville heir and to observe the suspects at close hand.

What listeners say about Sherlock Holmes: The Hound of the Baskervilles

Could It Get Any Better?

Nope, probably not! After listening to a dramatized version, I decided I needed to revisit the genuine Conan Doyle article.

Dated it may be, and it may have become something of a cliche, but "The Hound" still resonates. It's a great, suspenseful yarn and makes for a wonderful short listen - especially with the hallowed tones of Derek Jacobi.

Derek Jacobi's masterful reading of "The Hound" stands paws snd shoulders above the dozens of other recordings of this classic. There is not much to say other than this is as nearly perfect a book as one could write. To stare that I highly recommend it would be an understatement.

Have always loved this story and Derek Jacobi brings it to life beautifully! He's AMAZING, I will definitely look for more from him.

A Classic Read by a Master

Always enjoyed this tale but Derek Jacobi’s narration of it makes it even more enjoyable. I would listen to him reading the instructions off of a box of frozen chicken fingers.

Classic Sherlock Holmes story set on a creepy moor. Probably the inspiration for a lot of werewolf stories. Narrator is outstanding!

Derek Jacobi's voice is so wonderful, he creates such a great atmosphere, one which I felt I was actually inside the story or watching a live play because of which. Highly recommend this audio version of this classic story.

Greatest of all Sherlock Holmes books

Derek Jacobi is a truly brilliant voice actor who bring this together as the definitive way to enjoy this amazing story.

Arthur Conan Doyle was a genius!

I enjoy convoluted mysteries. This one is definitely that. Everything this author wrote is fascinating.

It's amazing how you can hear the same story more than once and have a completely different take on it each time. A true classic.