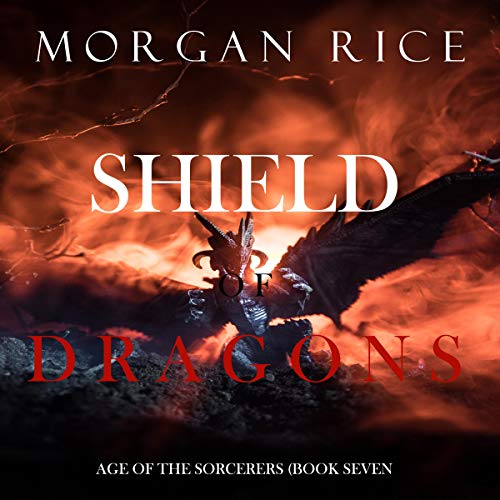 From number one best seller Morgan Rice, author of A Quest of Heroes (over 1,300 five star reviews), comes a startlingly new fantasy series. Shield of Dragons is book 7 in best-selling author Morgan Rice’s new epic fantasy series, Age of the Sorcerers, which begins with book 1 (Throne of Dragons), a number one best seller with dozens of five-star reviews.

In Shield of Dragons (Age of the Sorcerers, book 7), Lenore must try to restore a fractured kingdom. Hidden enemies surround her, all vying for power, while a mysterious new adversary rises in the South, requiring Erin to be dispatched on a fateful mission to stop it. All the while, Nerra and her dragons thirst for vengeance, while Lenore longs to be reunited with Devin - but a tragic twist may shatter all of their plans.

Age of the Sorcerers weaves an epic sage of love, of passion, of sibling rivalry, of rogues and hidden treasure, of monks and warriors, of honor and glory, and of betrayal, fate, and destiny. It is a tale you will not put down until the early hours, one that will transport you to another world and have you fall in in love with characters you will never forget. It appeals to all ages and genders.

What listeners say about Shield of Dragons

I'm very much enjoying this series. I listen to it while driving everyday id recommend it to anyone.

The narrator brings the story to life giving it depth and breaths life into the story. The story is well written and helps paint a vibrant picture and is an easy read as well as an easy listen.